This is an interesting review of Neil Ferguson's pandemic model.  If true, it obviously raises some interesting questions about UK strategy. But the biggest issue for me is the way it exposes the gulf between technology specialists and political judgement. Our politicians may be ill-equipped to make good decisions in a world when so much is dependent on good data.

Thanks for great audios recently - much appreciated.

Thank you for this educative article and I am delighted you are enjoying the service. For the many new subscribers who have joined our ranks over the last month, the daily audio/video and the Big Picture Friday version are the most expedient ways of accessing where my current thinking is residing.

Debate about the efficacy of the lockdowns is predictably ramping up. That’s to be expected. The pressure on businesses, personal finances and cabin fever lend credibility to anyone who wishes to defy quarantine. For example, Mrs. Treacy’s tennis circle have been discussing how to break lockdown orders to go and view the bioluminescence at the local beaches. Cabin fever is clearly taking a toll on everyone. Here is a particularly relevant section from the article:

Conclusions. All papers based on this code should be retracted immediately. Imperial’s modelling efforts should be reset with a new team that isn’t under Professor Ferguson, and which has a commitment to replicable results with published code from day one.

On a personal level, I’d go further and suggest that all academic epidemiology be defunded. This sort of work is best done by the insurance sector. Insurers employ modellers and data scientists, but also employ managers whose job is to decide whether a model is accurate enough for real world usage and professional software engineers to ensure model software is properly tested, understandable and so on. Academic efforts don’t have these people, and the results speak for themselves.

My identity. Sue Denim isn’t a real person (read it out). I’ve chosen to remain anonymous partly because of the intense fighting that surrounds lockdown, but there’s also a deeper reason. This situation has come about due to rampant credentialism and I’m tired of it. As the widespread dismay by programmers demonstrates, if anyone in SAGE or the Government had shown the code to a working software engineer, they happened to know, alarm bells would have been rung immediately. Instead, the Government is dominated by academics who apparently felt unable to question anything done by a fellow professor. Meanwhile, average citizens like myself are told we should never question “expertise”. Although I’ve proven my Google employment to Toby, this mentality is damaging and needs to end: please, evaluate the claims I’ve made for yourself, or ask a programmer you know and trust to evaluate them for you.

Questioning authority is the basis for the scientific method but too many people who succeed in academia are politicians and bureaucrats rather than iconoclasts.

There is no doubt that the Imperial College estimates were an example of extraordinary pessimism. However, we also need to bear in mind that the best time to get in front of an exponential curve is in its early stages. Dithering about the need for social distancing was and the jumps in infections led to a bigger problem and will require a lengthier convalescence stage because the virus is now so widespread.

News about the virus itself is getting progressively grimmer with the date of the first French infection brought forward to December and the incidence of children experiencing Kawasaki syndrome increasing in the UK and New York. Meanwhile there are massive differences in the death rates between different regions. Societal and climate factors coupled with the timing of social distancing and lockdowns appear to be the primary factors in how acute the infection rate is in different locations.

For example, half of all Swedes live alone so they practice a form of social distancing at the best of times. Spain and Italy have many multigenerational homes with families gathering to share communal meals. Vitamin-D deficiency may be partly to blame for the higher incidence of fatality in older people and in less sunny climates. When I was a child getting a sun tan was still considered healthy, today my doctor admonishes me for not wearing enough sunblock because of the long-term risk of skin cancer.

All of that has to be viewed against the positive strides being made in treating the virus. Vaccines candidates are proliferating and regulatory streamlining is accelerating the pace of innovation. Above all else the speed with which genetic solutions are being developed is an important proof of concept for the evolving biotech sector.

To date genetic solutions have focused on orphan diseases. Companies can get swift permission for treatments where there is no existing remedy. That was the prior proof of concept path. The growth potential of the sector is treating chronic conditions like diabetes and heart disease and unmet needs like arthritis and Alzheimer’s. 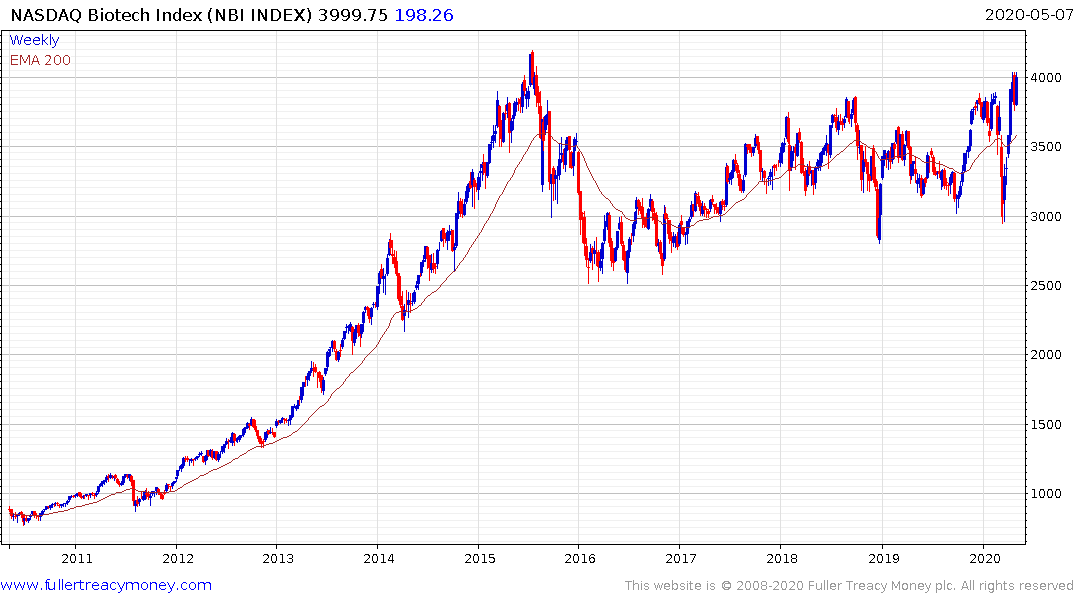 One-shot solutions represent an existential threat to the cashflow projections of conventional pharmaceutical companies. That is why they are now almost all focusing their attention on psychiatric drugs.