Email of the day on buying the dip by Eoin Treacy

I am adjusting my retirement income portfolio by broadening my global search for income, particularly from Investment Trusts. For the first time I am looking at Japanese markets and in particular 2 ITs, CC Japan Income & Growth and one of David’s favourites from a few years ago, Atlantis Japan Growth. I would value your thoughts on looking for income from the historically low yielding Japanese markets and your opinion of the 2 ITs: CC Japan Income & Growth only have a short history but have consistently raised their dividend over the past 4 years. Atlantis Japan Growth have altered their growth focus to some degree. I learnt from their most recent factsheet that, at the 2019 AGM, shareholders approved the Board’s recommendation to replace the redemption facility with a regular dividend paid to all shareholders on a quarterly basis set at 1% of net asset value at the close of the preceding financial year. This is an interesting approach, what is your opinion of it? Many thanks

I ask you, over a 12-month horizon, what are your 2 highest conviction ideas? The first from a purely technical/chart-based perspective and the second from a fundamental/macro-based view.

Eoin I trust this message finds you well! I have a question: I have some funds left in South Africa and I know its still early days for them in terms of the crisis, but the banking sector has been quite severely hit. I was considering buying some the banks, i.e. Nedbank, ABSA, Standard Bank and First Rand. I would love your view on that. Thanks a lot.

Here are three examples of emails I have received in the last week which are important from a number of perspectives. The first is I have received more emails in the last three weeks from subscribers, than in the preceding three months. That is normal when uncertainty prevails and was to be expected.

The tone of the emails is what I find particularly interesting and it is something that needs to be highlighted to investors. Almost everyone is in the market to buy the dip. That’s understandable. It has been the go-to investment strategy of the last decade and there is no denying there have been some exceptional value opportunities in the dividend aristocrats’ and gold miners’ sectors. However, when everyone reaches the same conclusion at the same time it is usually the time to think as a contrarian.

The damage done to the consistency of medium-term uptrends has been significant and almost every national index has type-2 top formation completion characteristics; represented by failed upside breaks and a massive reaction against the prevailing trend. A period of right-hand extension or ranging is the most likely outcome following such a move and considering how uncertain an earnings environment we have, that is not an unreasonable expectation. 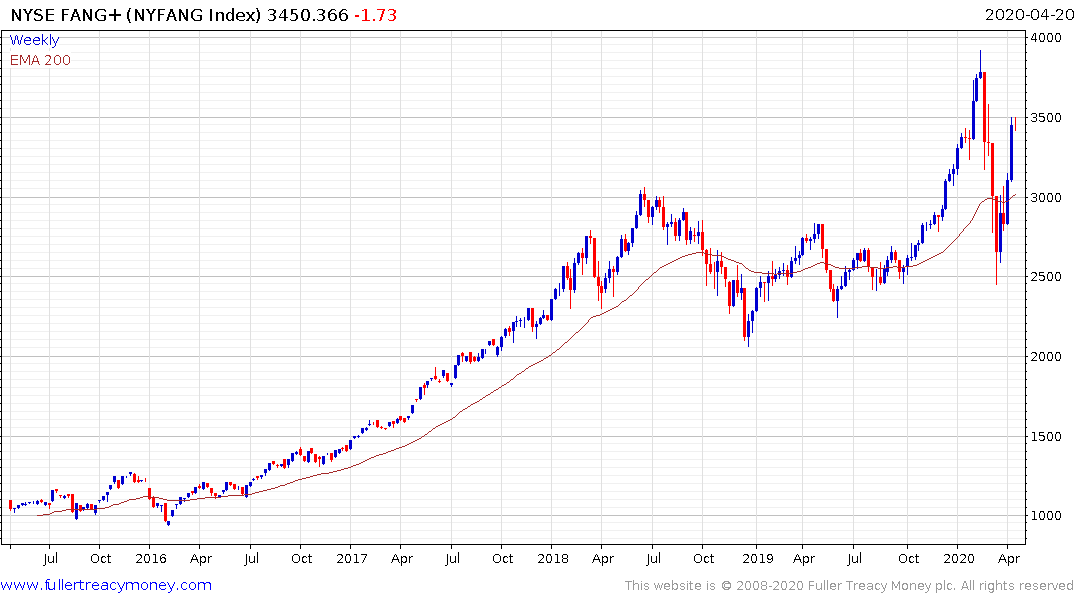 The relative strength of the 10 FAANG+ stocks is likely to be tested before long and may already be unfolding. Meanwhile, the weakest sectors like banks and autos are likely to make new lows.

The other swift conclusion everyone has reached is monetary and fiscal stimulus papers over a lot of cracks. I agree, but the transmission mechanism is not immediate. Additionally, we are at a transition point for both. The world is swiftly adopting monetary financing or its current equivalent, Modern Monetary Theory. The scale of spending is beyond comparison outside of World War II and that is likely to contribute to massive infrastructure spending, everywhere, once lockdowns end and fear subsides. 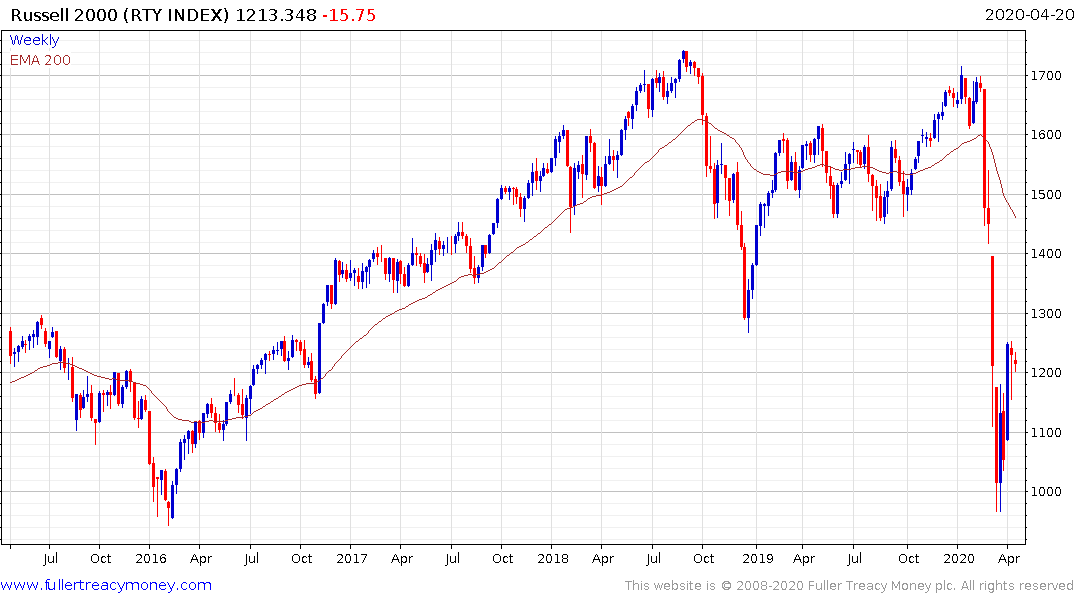 That pretty much ensures we are looking at the end of the lockdowns in the next month. It is reasonable to expect studies will highlight the mortality rate from the coronavirus it about 0.5%. That’s significantly higher than flu but not so much that it requires everyone stay at home indefinitely. The rest of the world is likely to come to the same conclusion China did. The economic treatment is worse than the disease and they will start to open up again. The provision of FDA approval for home testing today, the rapid permissioning for Gilead’s Remdesivir treatment option and increasing antibody tests all support that conclusion.

However, this will do little to allay consumer fears about infection. The only way that obstacle is to be overcome is with time, intensive testing and evidence of successful treatment. That suggests prolonged lags in sales for everything from homes to automobiles which will act as a lag on growth.

The relative strength of the Dollar, particularly against the currencies of commodity producers has been exacerbated by the weakness in the oil complex and additionally, the emerging markets are further behind in controlling outbreaks than much of the northern hemisphere. The expectation that warmer climates will slow the spread of the virus is a red herring in my opinion. The reliance of emerging markets on a global infrastructure stimulus cannot be overemphasised. Without it, they are in for a very hard time.

Fundamentally, companies with strong cashflows and records of dividend growth are likely to be among the best performers since they tend to be reasonably recession proof and do best in the trough and early stages of an expansion. The most consistent trend in the world today is gold.