Email of the day on bond market risk by Eoin Treacy

Thanks for the regular coverage. I have been a subscriber for a long time, and find this really the only voice of sanity and unbiased views. So, thanks. Could you elaborate on the statement you mentioned where the bond investors should be cautious because / if majority of the bonds are held by the government. Also, could you kindly help think through and elaborate how the fed would deal with the following - exits from the agency papers the Fed is buying. Is there any limit on how much the Fed can buy in this program? - how will the fed deal with losses in the Junk bond ETFs if there were to be defaults? Are the losses guaranteed b6 the Treasury?

Thank you for your kind words and long-term support. Governments very seldom pay back their debt. Instead they are more interested in the cost of servicing the total relative to other spending priorities. As interest rates have trended lower, the cost of servicing has followed, even as the overall quantity of debt has increased. That has created a situation where if interest rates rise, for any reason, the ability of the US government to fund itself will be impaired.

The biggest budget demands are social security, elderly healthcare, the military and debt servicing. The more of the bond market the Fed owns, the greater the control it has in dictating terms in the event of a solvency crisis. That’s inevitable at some stage and the dawning of monetary financing suggests the threat has moved from an accounting anomaly to a medium-term concern.

The primary victim when a government accelerates spending with no additional source of income, tends to be the currency. Right now, every country is engaged in the same policy and the US capital market is holding up best, so assets are still attracted to the US Dollar. Concurrently, the significant risk of additional economic weakness in European economies is helping to support the Dollar. However, the relative strength of gold in all currencies is clear confirmation we are in an era of competitive currency devaluation.

A government can choose to do whatever it wishes with domestic bonds issued in its own currency and particularly when those bonds are issued by semi-state organisations. Introducing forbearance and a 12-month payment holiday on mortgages is one clear example. The Fed can absorb the hit from more than 10% of all mortgages going delinquent because it can simply print the money to cover the loss. That suggests they are very unlikely to ever privatise the mortgage market again because it would give up a very useful policy tool.

In the event the Fed takes a loss on high yield bonds, the Treasury would be issued money by the Fed and would then reinvest it the Fed. There have been occasions when the Fed has been technically insolvent but that never lasts for long because they can print the money to recapitalise themselves. 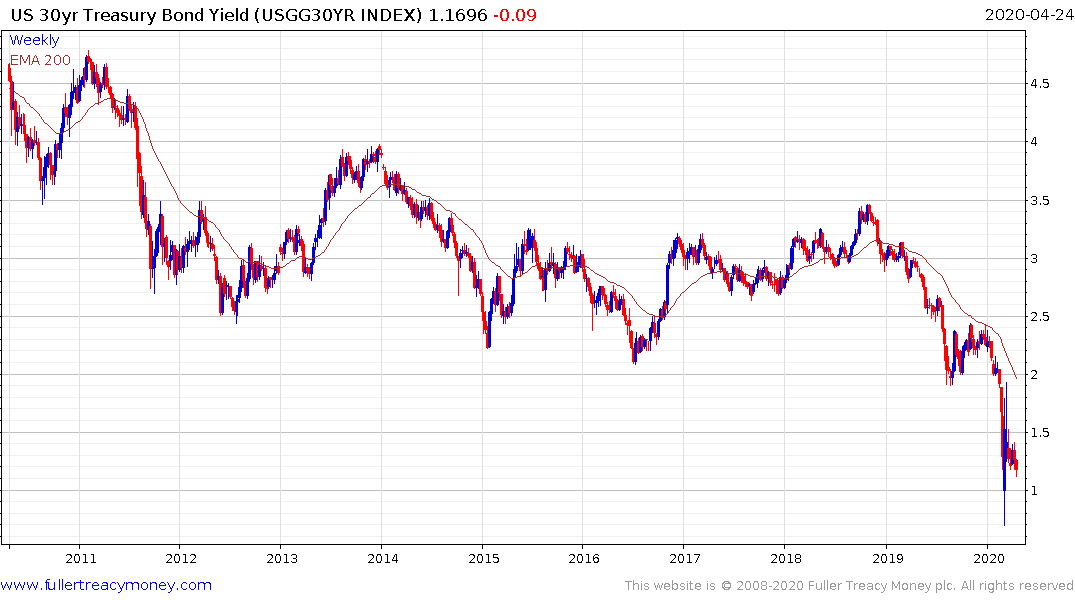 1.5% on the US 10-year and 2% on the 30-year Treasury yields are the key technical levels for these markets to signal a secular change of trend.