Greetings Eoin. Firstly, thank you for the daily commentary and Big Picture Long Term view. They remain the highlight of my weekend and are greatly appreciated. I’m interested in your comments regarding future expectations of inflation.

I hope I’m summarising you accurately, but in essence the thinking runs that the provision of vast amounts of monetary liquidity from Central Banks, combined with Government fiscal spending will at some point come home to roost, and drive up inflation.

If so, why then did we not see an inflation spike following the 2007/08 GFC, where massive (at the time) injections of liquidity and fiscal spending should have delivered the same result?

One view is that we did get inflation following the GFC, just that it showed up in asset prices, not in consumer prices. Equities, bonds, property, luxury goods, art and even later on precious metal prices all benefited from the increased liquidity following 2008. As you have previously highlighted, massive advances in technology, changes to the way we work and live, outsourcing of jobs to lower wage economies, and historically low interest rates have all combined to keep consumer inflation in check over the same period.

Are we to assume that this time is different, and we should expect consumer price inflation at some point, or is it safer to expect history to rhyme and that inflation will again show up in asset prices? If so, should we presume the liquidity will chase better returns and lower P/E multiples of Europe and Emerging Economies this time around? And finally, when investing I’m always conscious of the wise words from the famous British Economist, John Maynard Keynes “The market can stay irrational longer than you can stay solvent”. Spoken nearly a century ago, and never more relevant than today! Many thanks for your time

Thank you for this important email and your kind words. The global response to the 2008 global financial crisis was to bailout the sinners, and pass the bill on to savers. The massive liquidity provided and increases in government debt loads the bailout entailed, saved the global economy. However, it also exacerbated inequality, because, as you highlight the inflation benefitted the holders of financial and physical assets. The coronavirus has laid bare that divergence and it is fanning the flames of left-wing populism.

The populist movement sprang to life in 2014 with Narendra Modi’s success. However, it is worth considering that the BJP Party is broadly a right-wing nationalist organisation. The subsequent success of populist fringe organisations around the world whether Duterte in the Philippines, the Brexit movement in the UK, President Trump in the USA, Bolsonaro in Brazil or the League in Italy or stem from right-wing organisations. They have tended to focus on cutting taxes, protectionism, law and order and spending.

The latest evolution of this trend is left-wing oriented. AMLO’s success in Mexico, running on a “hugs, not gunshots” motto, ceded the war on drugs to the cartels. Black Lives Matter’ motto is “silence is violence”. That brooks no opposition and demands full throated acceptance of the mantra. The firing of the New York Times head op-ed writer for posting an editorial by Senator Tom Cotton was justified by claiming the call to put troops on the street “endangered” the lives of its journalists. That’s an asinine argument, but it passes for justification for censorship today. Left wing populists support raising taxes, laissez-faire policing, censorship, additional spending and redistribution. The vote to completely dismantle Minneapolis’ police department over the weekend is another example of how left-wing populism is gaining sway.

Modern Monetary Theory is now a reality. Central banks are actively supplying governments with as much money as they require. A point Iain Little made a couple of months ago was the flamboyant restoration period in British history followed the austerity of the Puritans. He wondered whether we would see a significant uptick in economic activity following the end of the lockdowns and people adopt a devil-may-care attitude.

I am seeing some evidence of that. Mrs. Treacy’s sales have recovered over the last week and exceeded those of 2019 for the same time of the year. The parking lot on the restaurant row near my home yesterday was jammed with cars. Traffic is picking up again and employment surprised on the upside last week.

Inflation requires excess money supply and velocity of money to increase. The supply of money is surging and velocity is picking up. Meanwhile populists from either side of the spectrum are not going to tolerate cuts to spending or higher interest rates. That suggests central banks are going to try and control the yield curve. That could potentially delay any significant decline in bond prices until inflation becomes an undeniable problem. 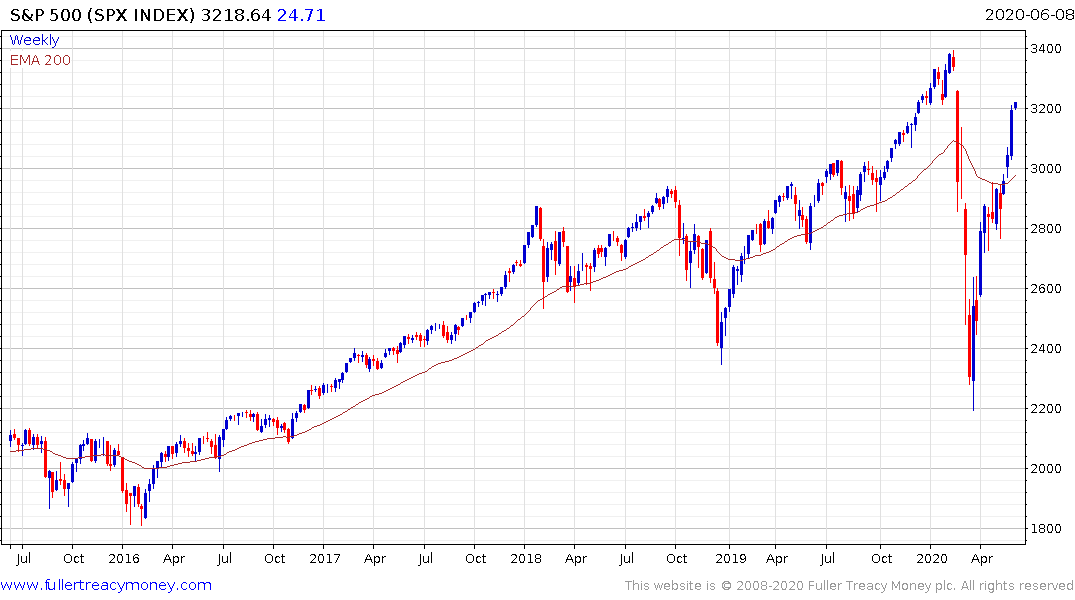 Meanwhile the correlation between the stock market and the flood of liquidity remains intact which continues to support asset prices in the same manner it has done over the last 12 years. Valuations are increasing but will only become problematic when the flow of liquidity is questioned.

The continued uptrend in gold is the clearest sign investors are hedging their exposure to both the stock and bond markets.

Generally speaking, gold and emerging markets tend to be highly correlated. The emerging market sector is likely to benefit from the weakening Dollar environment and is trading at a significant valuation discount.