Email of the day - on precious metals
Comment of the Day

Email of the day - on precious metals by Eoin Treacy

Hello Eoin, if "liquidity trumps everything else" and assuming that governments worldwide will continue New Monetary Theory with massive deficit spending financed by monetization by central banks at essential cero or negative real interest rates, then this wall of liquidity should further propel the ongoing general "melt up" of stock and debt markets allowing a prolonged, demand driven risk-on rally.

In this case precious metals would lose their supposed unique "safe haven" status/advantage until such time that serious inflation or stagflation or a likely collapse or reset of the monetary system becomes visible to a large part of investors - if at all.

Until such (far-off?) day of reckoning, precious metals would neither be needed as protection against systemic crisis as "NMT would be working beautifully" nor for return purposes as stocks and other assets will be pushed up by abundant liquidity. For investors in precious metals/mining stocks the critical questions therefore is:

How long will stocks and other financial assets outperform and "unneeded" precious metals correct or even collapse? Looking back at 2011 and onwards, precious metals collapsed and stayed low until mid-2019 whilst continuing QE1- QEn (the predecessor for NMT) around the world made stock and debt markets boom for the next 9(!) years.

As this time round central banks and governments "shot before asking" by IMMEDIATELY providing unlimited liquidity and fiscal deficits instead of slowly finding and providing relief to financial markets as they did in 2008-2012 and onwards, the best part of the run-up in precious metals may be behind us and the place to invest is in stock markets without much regard to old fashioned valuation discipline.

Most of the performance of the past 10 years has been by way of a multiple expansion - why not have the S&P 500 trade at 25+ trailing earnings if real interest rates are negative and there is a worldwide "Powell/central bank put" as a guarantee against any serious losses?

My questions to you: 1. Why stay invested in PMs NOW and risk a serious corrections/collapse in PMs? 2. When will investors at large recognize - if at all (?!) - that NMT is and will be seriously debasing the currency and nominal values of all assets and that PMs are relatively better or at least, competitive investments/stores of value than say quality stocks (which pay at least a small dividend)?

Thank you for reflecting on the above and sharing your views with the collective. All the best, B

Thank you for this summary of the questions many investors are asking. The rationale behind any bubble is valuations don’t matter. The evolution of ETFs as trackers of indices is the clearest evidence anyone might wish for that this trend is already well underway. Market cap weighted indices are closet momentum strategies so tracking them turns everyone into a momentum investor.

The addiction of the market to liquidity is the reason we described the rebound from late 2008 onwards as liquidity fuelled. That habit is going to be hard to quit and the adoption of similar liquidity-rich polices all over the world is lending additional fuel to the advance. With valuations where they are today, we have to consider that the bullish argument coincides with the third psychological perception stage of a bull market which often climaxes in mania.

I have argued for some time that the rationale for paying close attention to cyclically adjusted P/Es was flawed because valuations don’t matter in a bubble until they start to contract. It is possible the CAPE will exceed the levels posted in 1999 before this trend rolls over.

Debt monetisation was a contributing factor in the rise of inflation in the 1970s. The reason gold has broken out over the last year is because of the reality of negative real interest rates. The year over year comparisons for economic activity are going to be record breaking in 2021 because of the decline we have seen this year. That’s hard to envisage right now with mass protests and looting on the streets of the USA. The next five months, heading into the US Presidential election are going to be very emotional but the lockdowns will end and the velocity of money is already picking back up.

Companies certainly wish to cut pay in response to the new supply of workers but the big question is whether that will be possible with so many people protesting for living condition upgrades. Meanwhile continued strife in the relationship with China is potentially inflationary.

The argument I think is least publicised is that gold does best in a negative real interest rate environment because of its limited supply. It is also a hedge against inflation if the negative real rate environment is sustained as seems likely because central banks will be unlikely to raise rate to keep pace with future inflation.

The reason for owning precious metals is therefore more about hedging exposure to bonds than equities. Bond yields are artificially low everywhere and as interest rates trend towards zero that risk is amplified. At least with gold you do not have counterparty risk. 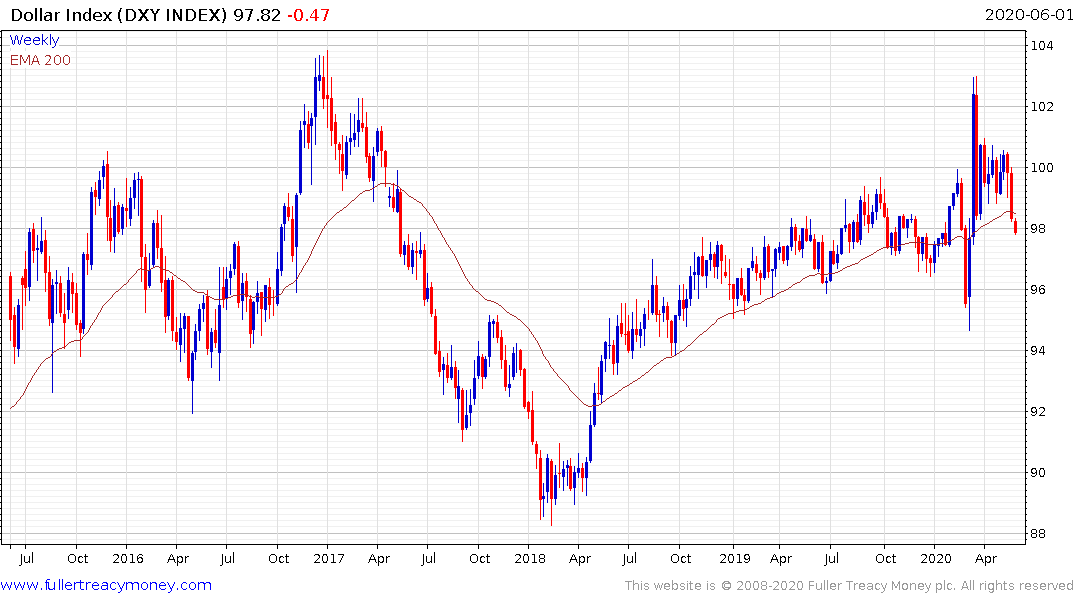 If the Dollar is in fact peaking as appears obvious, it will burnish the outlook for gold in that currency while simultaneously making emerging markets more attractive, just like in the early 2000s. That’s the primary reason for favouring gold over the medium term.

However, despite the medium-term bullish backdrop, the mantra “don’t pay up for commodities” remains as true today as it was twenty years ago. The sector is volatile. It is prone to sharp pullbacks and the best time to buy is when everyone doubts the bullish case.

There is another point that is worth considering. It’s simply to think about whether something that has just completed a multi-year base is more likely to outperform or something that has been rallying for a decade already. Gold enjoys the base effect from that perspective.