and Jill Ward for Bloomberg may be of interest to subscribers. Here is a section:

Despite years of exceptional ECB support, the euro-area economy is in the throes of a slowdown in growth and inflation remains weak. In Germany, typically the region’s stalwart, manufacturing is mired in a slump as trade tensions weigh on exports and auto factories struggle to cope with changes in the industry.

With borrowing costs at historic lows, Draghi has repeatedly stressed the need for structural reforms, and he reiterated that call at a press conference in Frankfurt on Thursday.

“We are not in a situation that makes it necessary or wise to act as if we were in a crisis, we are not,” he said in an interview with Bloomberg Television.

There was a little “sell the rumour to buy the news” evident in Euro trading this morning. The rally did not hold through the close and looks like little more than some steadying in the region of the previous lows. 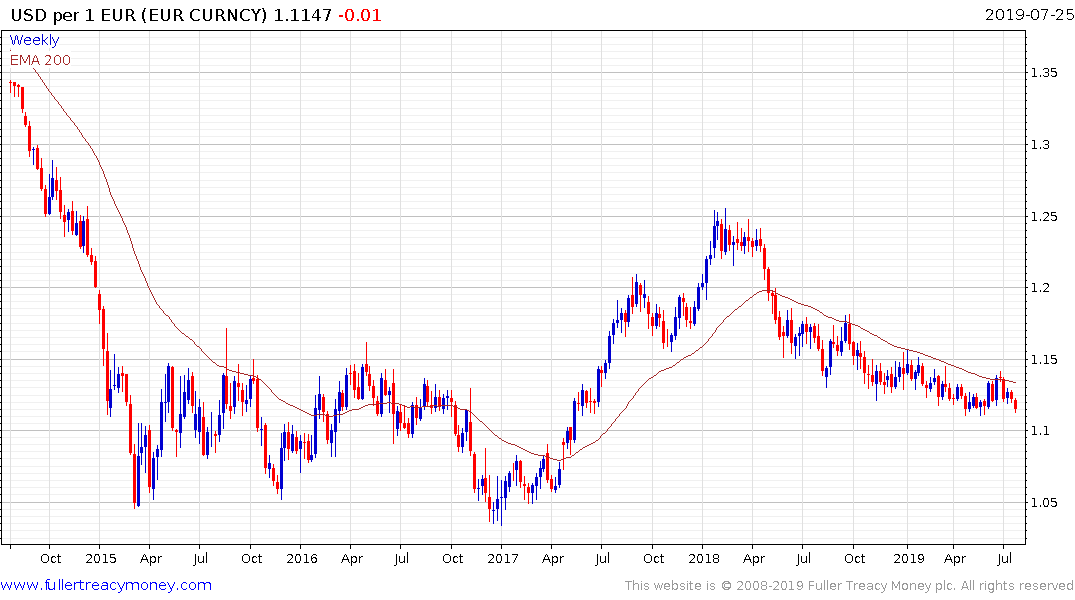 The Eurozone is badly in need of stimulus. Slowing demand in China and a trade spat with the USA are dragging on the manufacturing sector. That might be tolerable if domestic demand growth were more robust. The problem is monetary policy is great for depressing yields in the bond market but it is does not get people spending. That is particularly true where fiscal austerity has been more acute.

That’s why Mario Draghi has been beating the drum for governments to deliver fiscal stimulus. There is no appetite for that in the Eurozone because it would damage the long-term aim of stamping out moral hazard and realigning the region’s debt to GDP ratios. That suggests the ECB is going to remain the primary source of liquidity for the EU, which ensures interest rate cuts and renewed quantitative easing are inevitable before the end of the year.