The ECB president repeated his mantra that the Governing Council needs to be patient in letting inflation pressures build in the euro area and prudent in withdrawing support. At the same time, there’s room to tweak existing measures.

“As the economy continues to recover, a constant policy stance will become more accommodative, and the central bank can accompany the recovery by adjusting the parameters of its policy instruments -- not in order to tighten the policy stance, but to keep it broadly unchanged.”

The comments echo an argument first made by Bundesbank President Jens Weidmann as early as November that, all else being equal, ECB policy would become more accommodative as inflation picked up. With his nod to a frequent critic of quantitative easing who has been calling for an end of the 2.3 trillion-euro ($2.6 trillion) program, Draghi may have set the stage for a discussion in the coming months on phasing out asset purchases. They are currently scheduled to run until the end of the year.

“Draghi moved his first step toward indicating that ECB monetary policy will become less accommodative in 2018,” Marco Valli, an economist at UniCredit in Milan, wrote in a client note. “Unless an unexpected shock materializes, a formal tapering announcement is likely to come at the ECB monetary- policy meeting scheduled on 7 September.”

Here is the sentence which probably had most influence on the bond markets today “that “the threat of deflation is gone and reflationary forces are at play,”. The ECB, through massive monetary accommodation, is beginning to achieve the same kind of asset price inflation that the Federal Reserve did in the USA. That is contributing to an uptick in the type of economic activity the central bank measures while the low value of the Euro has boosted the competitiveness of the region’s significant exporting base. 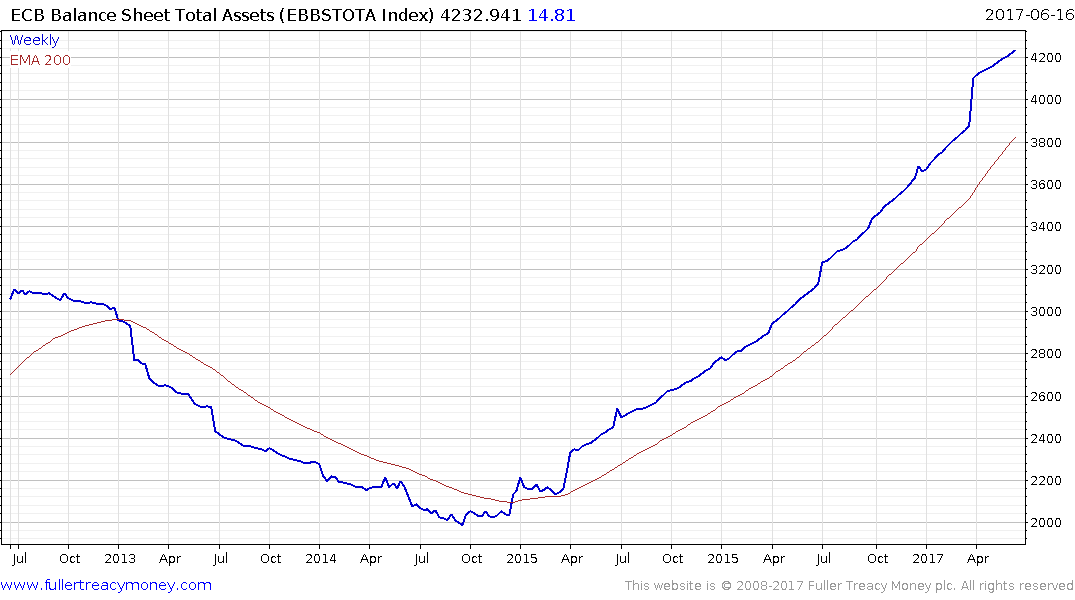 German Bund yields have been among the primary beneficiaries of flows riding on the momentum provided by the ECB’s quantitative easing. The yield has been ranging mostly above the trend mean since late last year and firmed from that level again today. A sustained move below 0.28% would be required to question medium-term scope for additional upside. 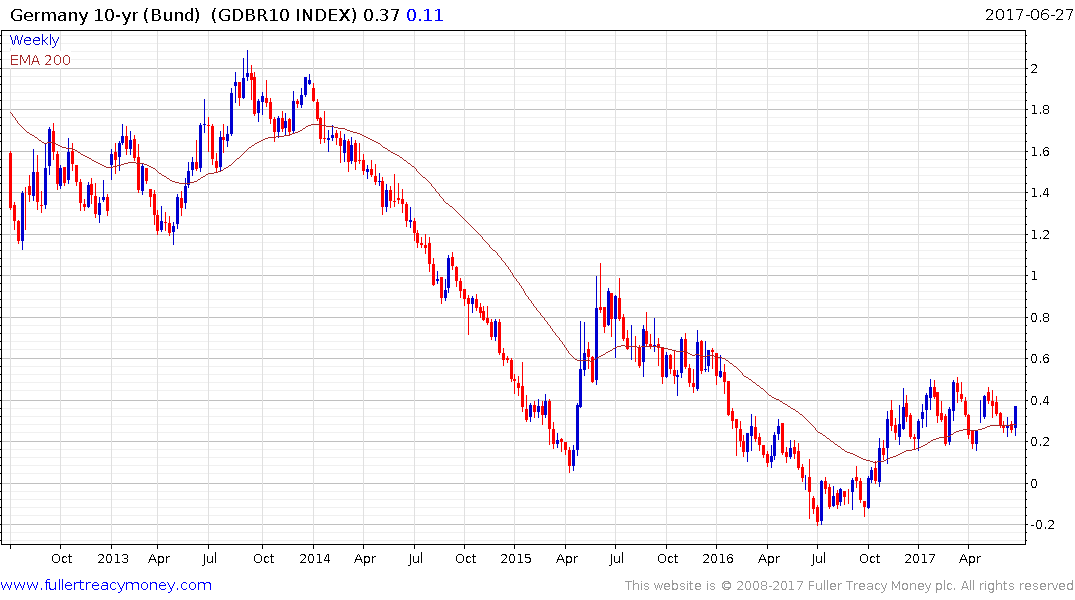 The Euro has been rallying throughout today’s session on the back of these statements and broke successfully out of the most recent month-long range in the process. It is looking increasingly likely that it will now move back up to at least test the $1.15 level which represents the upper side of developing two-year range. 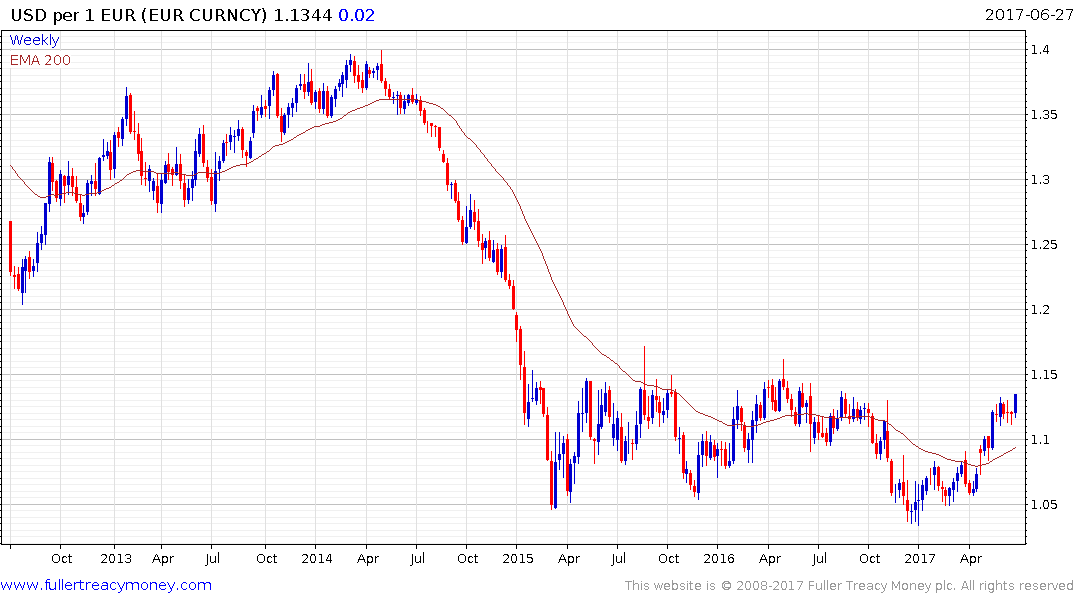 With the Euro strengthening in such a dynamic manner, it is likely to represent a headwind to Eurozone stock markets which are now more likely to unwind short-term overbought conditions relative to their respective trend means.

Since the ECB has been among the most prolific providers of liquidity globally, the threat that they are now considering removing some of that largesse is also a factor in the increasing potential for an unwinding of wide overextensions relative to the trend mean on a significant number of large cap technology companies. 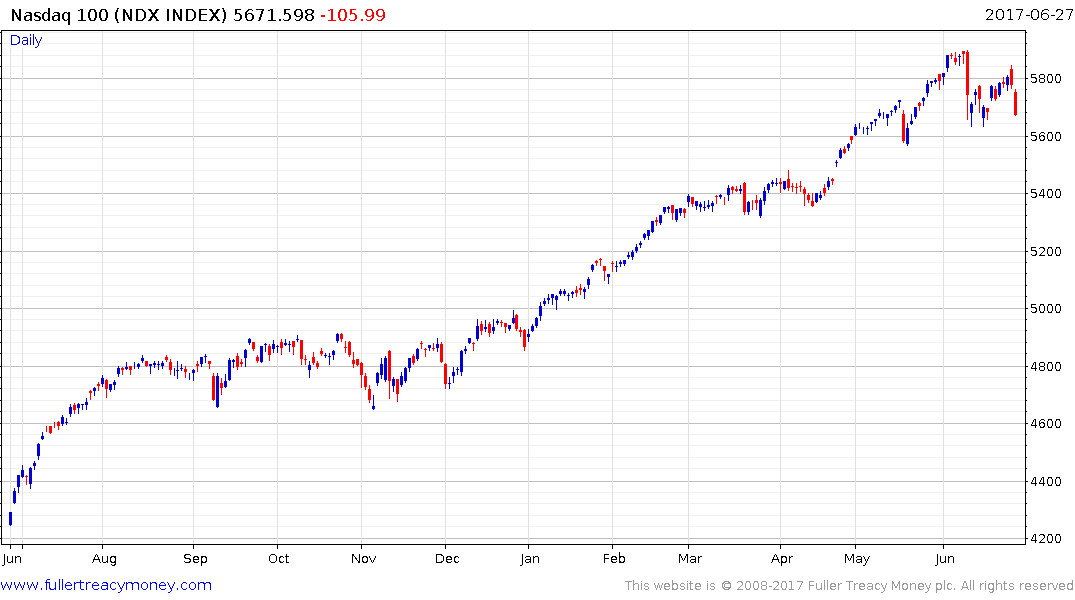