Consider now the potential for a diametrically opposite situation in COMEX gold. Why and how could this unfold?

COMEX gold also has "delivery month" contracts that serve as the "front month" for trading purposes until they go off the board and into delivery—at which time the trading volume rolls into the next scheduled month.
In delivery, anyone still long the contract can stand for delivery through the COMEX vaults in New York. (And now might also stand for fractional ownership of bullion bars in London, too.)
But global demand for physical gold outstrips supply at present, as many refineries, mines, and mints are closed worldwide due to Covid-19.
Thus, we are seeing a growing need/demand to hold COMEX contracts into delivery. For the current month of Apr20, total gold deliveries on COMEX exceed 3,000,000 ounces. This is more than 3X the usual demand for a "delivery month".
If an extreme shortage develops—or if any sort of "run" on the bullion bank fractional reserve system begins—demand for delivery through the COMEX and LBMA will soar.
Demand for the front/delivery month contract will surge. However, to buy a contract, you will also need a seller—someone interested in adding a short or selling an existing long.
And in this case, there may be NO SELLERS. Thus, what you may see is a true offerless market.
The potential result? The exact opposite of what you witnessed Monday in NYMEX crude oil.

The US Oil Fund ETF’s predictable roll schedule which has been gamed by hedge funds for years is the primary reason the April WTI crude oil contract hit -$40 this week. To the best of my knowledge there is no corresponding fund that is rolling over futures contracts in gold on a predictable basis. The vast majority of ETFs investors buy for gold exposure hold physical metal rather than futures.

Countries like Russia which have been major buyers over the last few years are no longer buying and annual mined supply has continued to grow over the last decade. That represents the bearish argument for gold.

The bullish argument is that governments are flagrantly debasing their currencies, en masse, and gold is the only reliable barometer that can measure the extent of their printing. The short-term supply deficit, which has resulted from transportation networks shutting down, has created an historically wide arbitrage between the London and New York markets. I don’t think there is a risk of failure to deliver on physical settlement but https://www.bloomberg.com/news/articles/2020-03-24/scramble-for-gold-sends-new-york-premium-to-a-four-decade-high

Demand for physical gold remains firm and the sector’s continued strength is attracting more bulls. Bank of America’s report yesterday where they raised their target to $3000 is a case in point. Here is a section:

True, a strong USD backdrop, reduced financial market volatility, and lower jewelry demand in India and China could remain headwinds for gold. But beyond traditional gold supply and demand fundamentals, financial repression is back on an extraordinary scale. Rates in the US and most G-10 economies will likely be at or below zero for a very long period of time as central banks attempt to push inflation back above their targets. Beyond real rates, variables such as nominal GDP, central bank balance sheets, or official gold reserves will remain the key determinants of gold prices, in our view. As central banks and governments double their balance sheets and fiscal deficits respectively (see Fed balance sheet likely to double this year), we have also decided to up our 18m gold target from $2,000 to $3,000/oz. 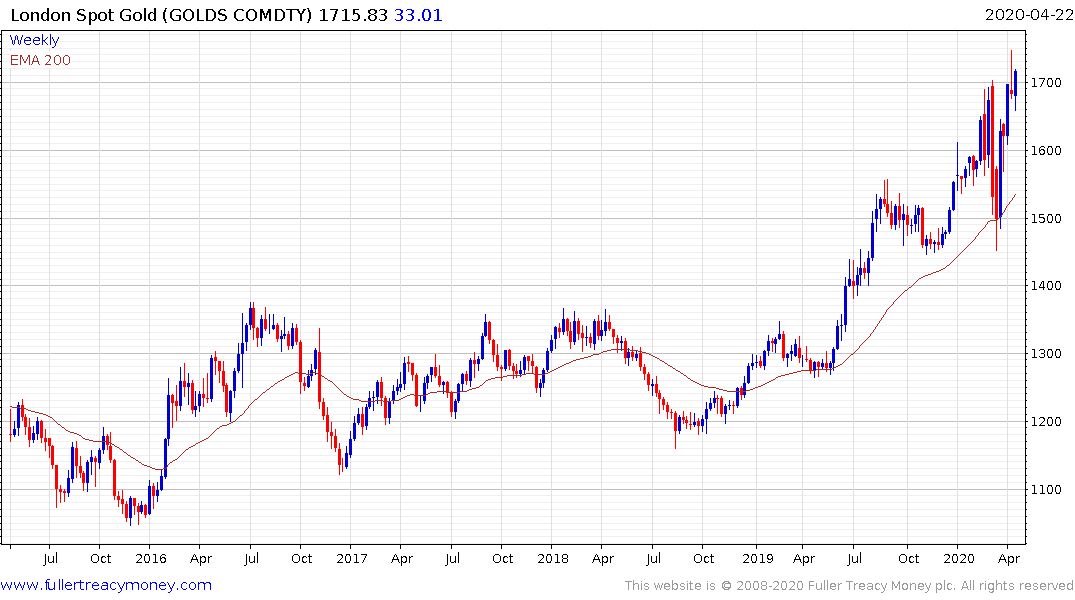 The gold price is short-term overbought in US Dollars but, so far, its consolidation in the region of its peak has been quite orderly, suggesting scope for additional upside. 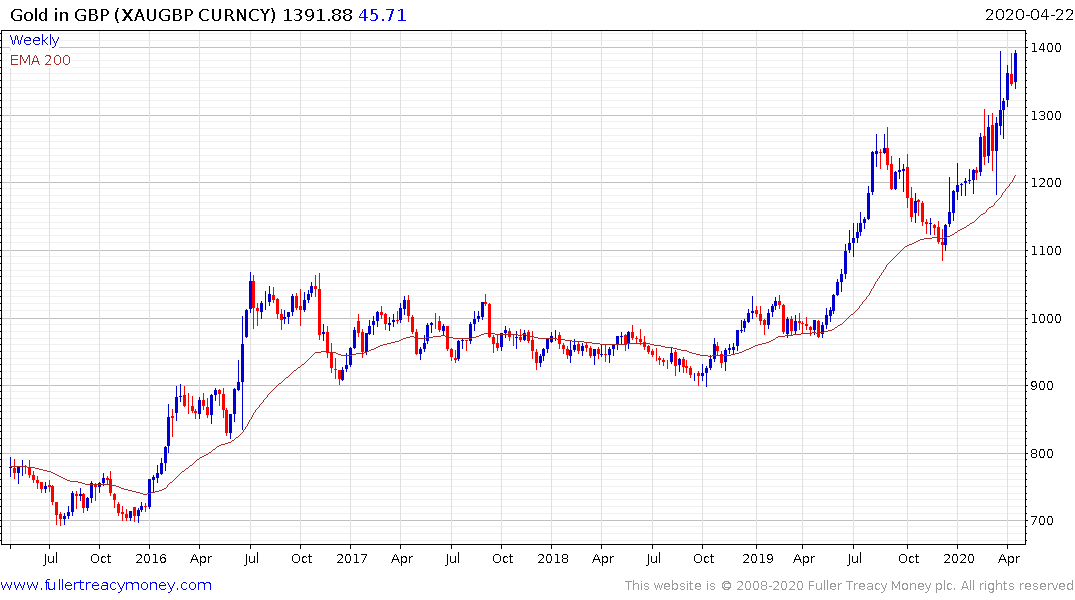 Against the British Pound gold looks better supported and is primed for a breakout. 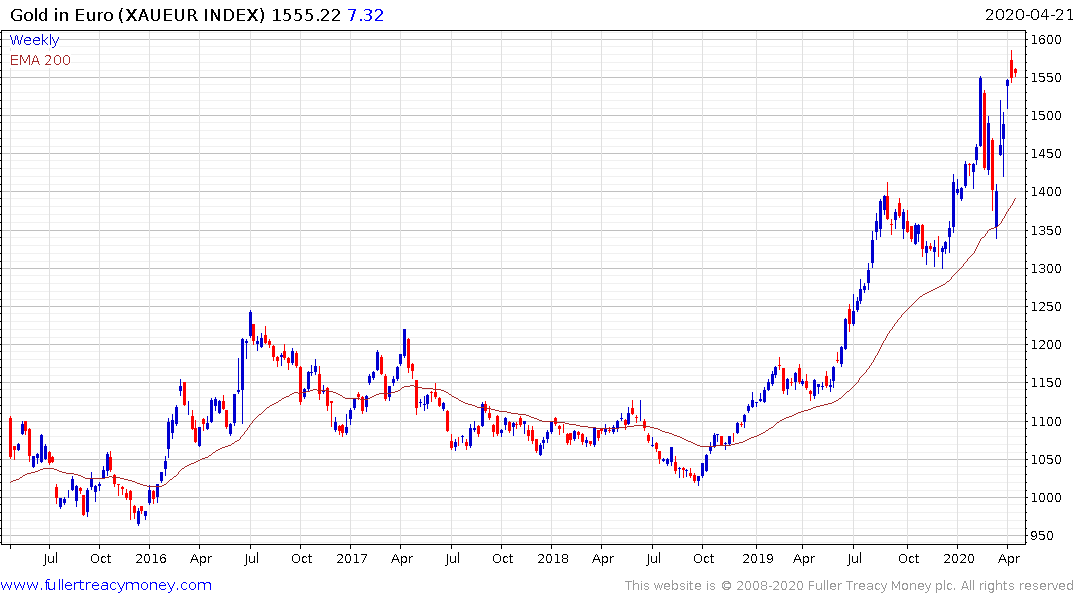 Against the Euro gold has been posting an orderly consolidation, above the February peak, over the last week. A sustained move below €1500 would be required to question scope for additional upside. Gold’s pattern against the Swiss Franc is very similar. 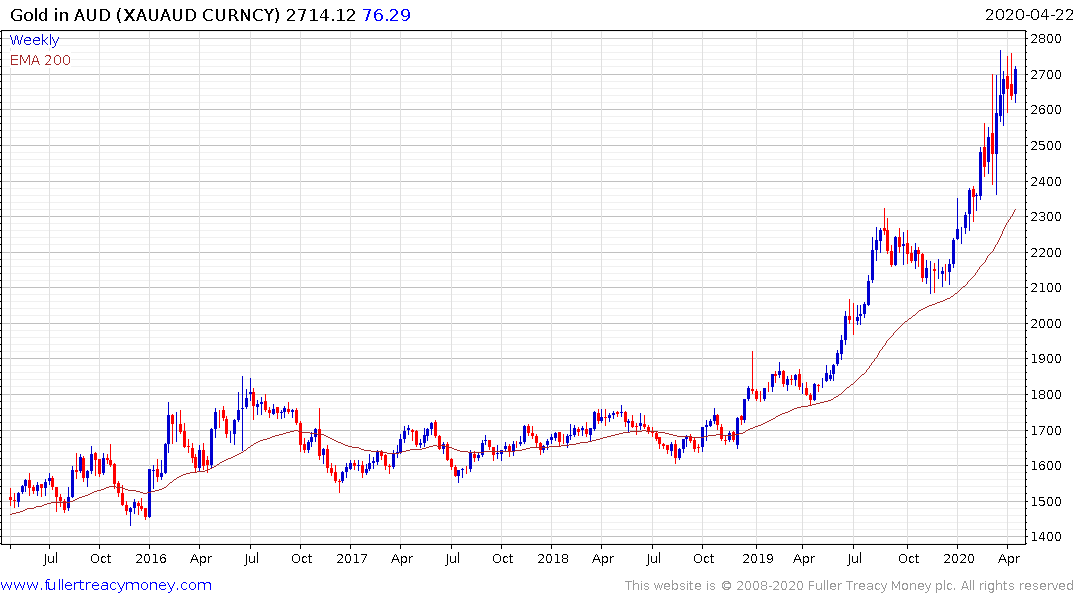 Against the Australian Dollar, gold has posted a series of ranges one above another so far this year and appears to on the cusp of breaking out of the most recent one.

Right now, gold is appreciating in almost every currency and is therefore attracting flows from all over the world.