Eighty-four percent of Chinese cases, 97% of critical cases and more than 96% of deaths are within the province, which was placed under mass quarantine by the government on Jan. 23 to slow the virus’ spread to the rest of the country. The ongoing lockdown of the region of 60 million people has led to widespread suffering and scores of preventable deaths as the local medical system collapsed under the strain.

​The lockdown also meant that China’s fatalities from the pathogen have been confined almost entirely to the province. As of Wednesday, 4.3% of people who were confirmed to have the virus in Hubei have died, while that rate is 0.8% in China outside Hubei.

Over the past three weeks, China’s number of recovered patients has surged both in Hubei and the rest of the country, with the government sending in thousands of health-care workers to help in Hubei. Almost 65% of those who’ve been officially diagnosed with the disease are now better and out of hospital, according to the data from the National Health Commission on Thursday.

Loosening restrictions comes with a significant number of risks because the viral infection rate has capacity to ramp up again as people get back to work and particularly in the cramped conditions of factories. The bigger question is whether China is willing to tolerate community spread on the assumption most workers will recover in a relatively short period of time. I believe that is the most likely scenario considering the continued risk from domestic or imported infections.

What I find interesting is the reported mortality rate has declined to 1% in China whereas it had previously been estimated to be in the region of 3-4%. Right now, the mortality rate internationally is around 3-4% so there is potential it will also trend lower as more cases are identified and a smaller percentage of infections turn out to be serious. 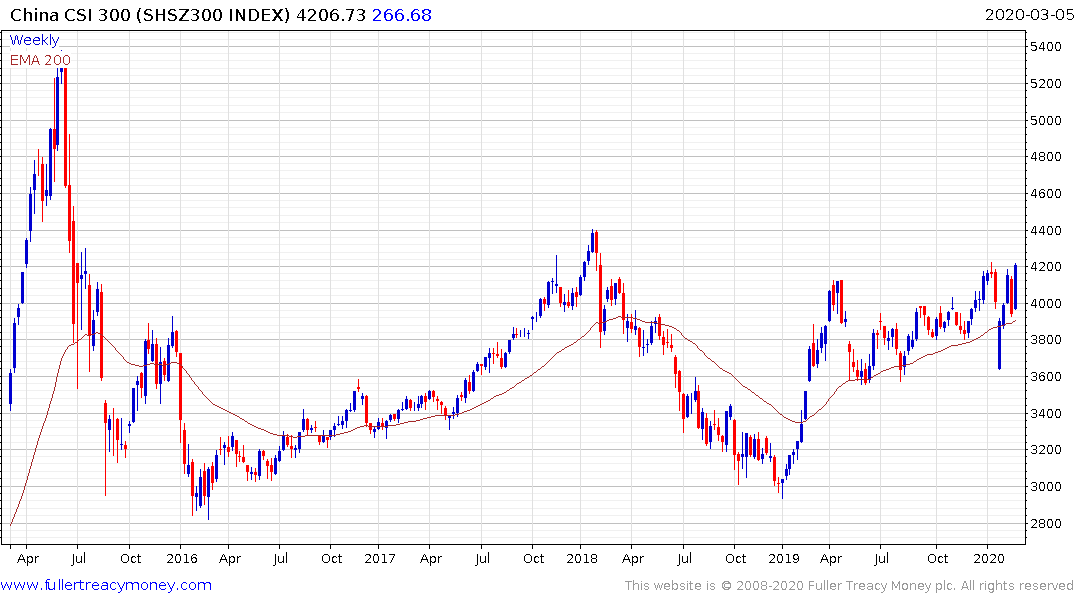 The stimulative measures introduced to date, with defaults banned, stretched maturities and abundant liquidity, have helped to support the stock market. The CSI 300 hit a new closing high today as the government lends further assistance to investors. It is still unlikely to trend higher against the wider uncertainty of the global response to the pandemic but it is certainly exhibiting relative strength.

There is potential that China is being favoured by international investors on the assumption it will be the first to exit from the difficulties associated with containing the virus because it was the first into the crisis.