Coronavirus mortgage bailout: 'There is going to be complete chaos,' says industry CEO
Comment of the Day

Coronavirus mortgage bailout: 'There is going to be complete chaos,' says industry CEO by Eoin Treacy

“This is a crisis so easily correctable,” he said. “The GSEs [Fannie Mae and Freddie Mac] for years have always assured the servicing community that in the event of a major credit event, they’ll be there to make sure they provide the liquidity. From what we are hearing, and we can’t verify it, the FHFA director instructed the GSEs not to set up a liquidity or advance facility.”

When asked for a response to the industry plea, Calabria on Monday declined to comment.

Both Stevens and Bray said that because of this new and momentous risk in the mortgage market, it is suddenly much harder for borrowers to get new loans or refinance current mortgages. Wells Fargo is already placing restrictions on jumbo lending to its customers.

“It’s just going to create more fear within the nonbank servicing sector. The banks that service them are going to start to not lend,” said Bray. “Ultimately that impacts homeowners. They won’t be able to be served because these companies will be in the middle of a crisis. We’ve seen a lot of businesses close their doors, and if you start closing the doors of servicers, you’re impacting people’s lives much more than other sectors. You’re talking about their homes. It’s the largest asset they have.”

The buck has to stop somewhere. If homeowners are given a free pass on skipping mortgage payments that simply pushes the onus for making payments up the line to servicers who need to pay mortgage bond coupons. When major tenants like H&M or Primark refuse to pay rents, it puts a great deal of pressure on landlords who still have mortgage payments to meet. I have not seen any commentary yet on how much forbearance will be made available to commercial property REITs.

This is where “whatever it takes” meets the reality of financial market illiquidity. The future of the lending market depends on lenders having confidence payments will be made and that they have some recourse in the event of default. When both those conditions have been removed fewer loans will be approved and rates will be driven up. Since neither of these outcomes is desirable, it is inevitable the Federal government will need to extend assistance to these sectors.

Mr. Cooper has been trending downward since 2014 and is now back testing lows over the last couple of years. 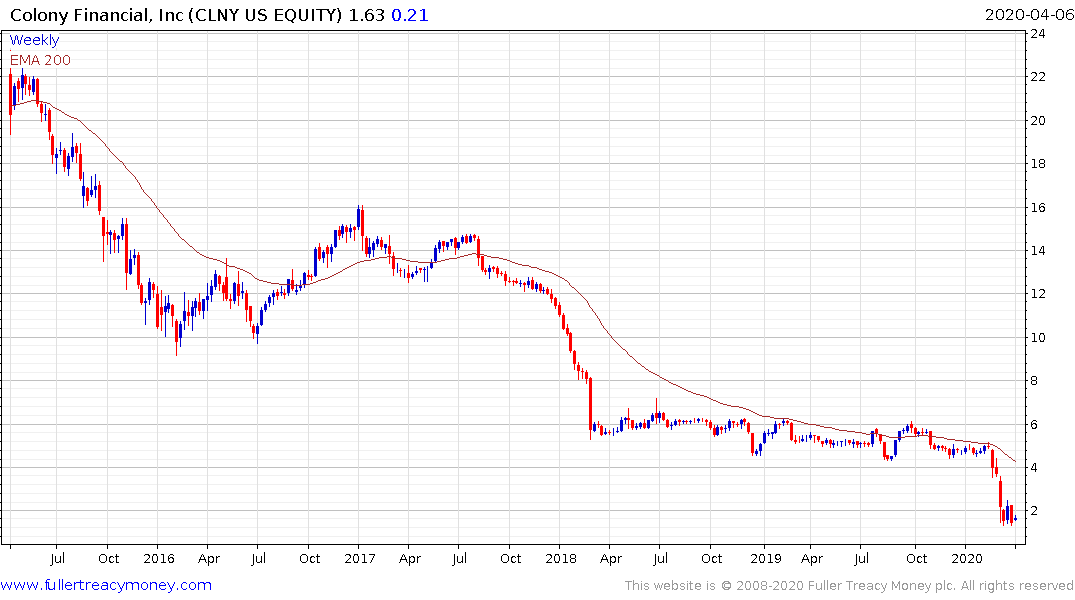 Colony Capital has collapsed over the last month and has so far failed to rebound.

The demise of companies like these would represent a significant headwind to the property market so they are likely to receive the assistance they need in some manner despite the negative political optics.