“I think we’re still going to see a slight increase in 2020,” André Bolduc, an executive board member at the Canadian Association of Insolvency and Restructuring Professionals, said in a phone interview from Ottawa. “We’re hoping the economy stays strong so that the increases stay healthy and it doesn’t become a crisis.”

On the less alarming side, adjusting the number of insolvencies to account for population growth shows the increase isn’t as dramatic. As a share of total debt, the rate of filings also appears to be more stable.

In addition, the lion’s share of the increase in the past decade has been so-called consumer proposals, where the debtor agrees with creditors to pay back a proportion of what’s owed. Proposals are considered less severe than bankruptcies, the other form of insolvency reported by the Ottawa-based OSB.

Canada depends on exports to both the USA and China for its prosperity. The slowdown in US manufacturing as a result of the trade war will have had some impact which should now be moderating from the signing of the USMCA. However, the knock-on effect from China’s freezing of economic activity on commodity demand represents a significant challenge that is only now being considered. 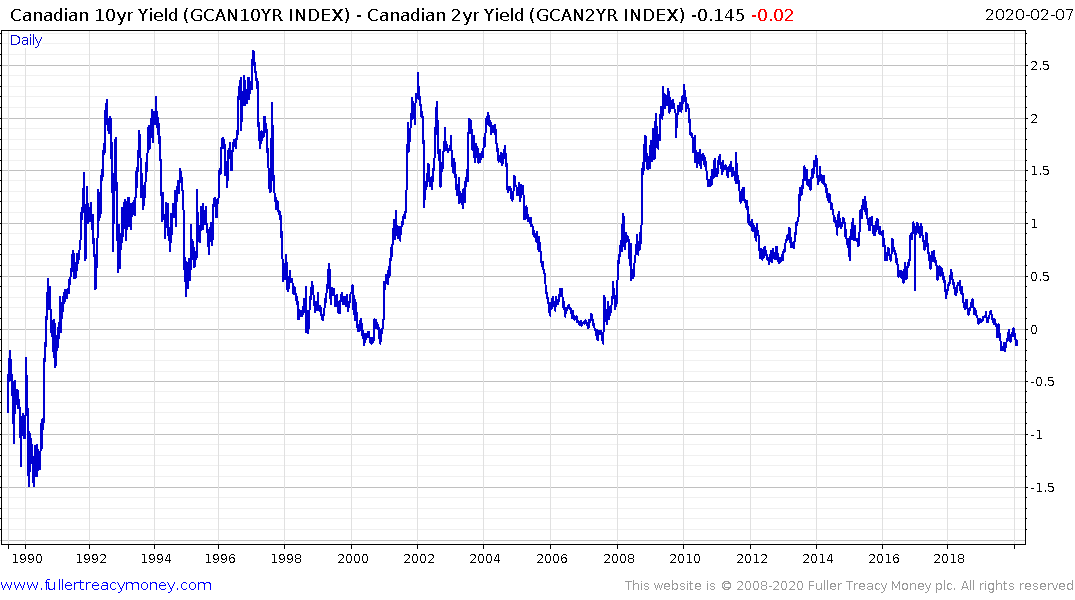 Canada’s yield curve is sharply inverted. The spread between the 10-year and 2-year inverted in July and has failed to sustain a move back above zero since. The inverted yield curve is a reliable lead indicator for the US market and the trajectory of both country’s spreads tends to be quite close. However, it is not as powerful a lead indicator for Canada as it is for the USA. 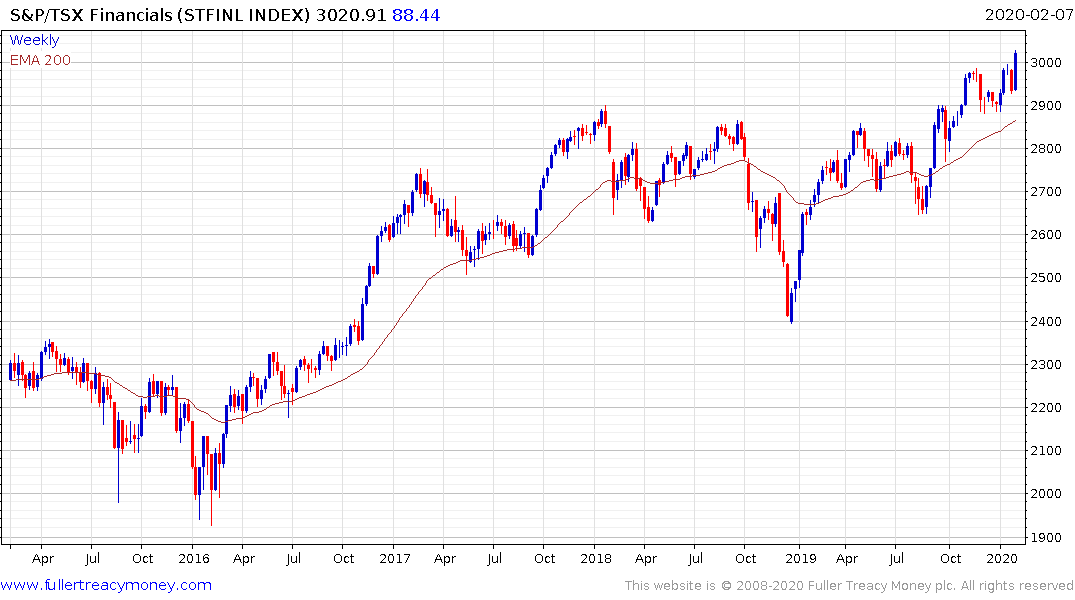 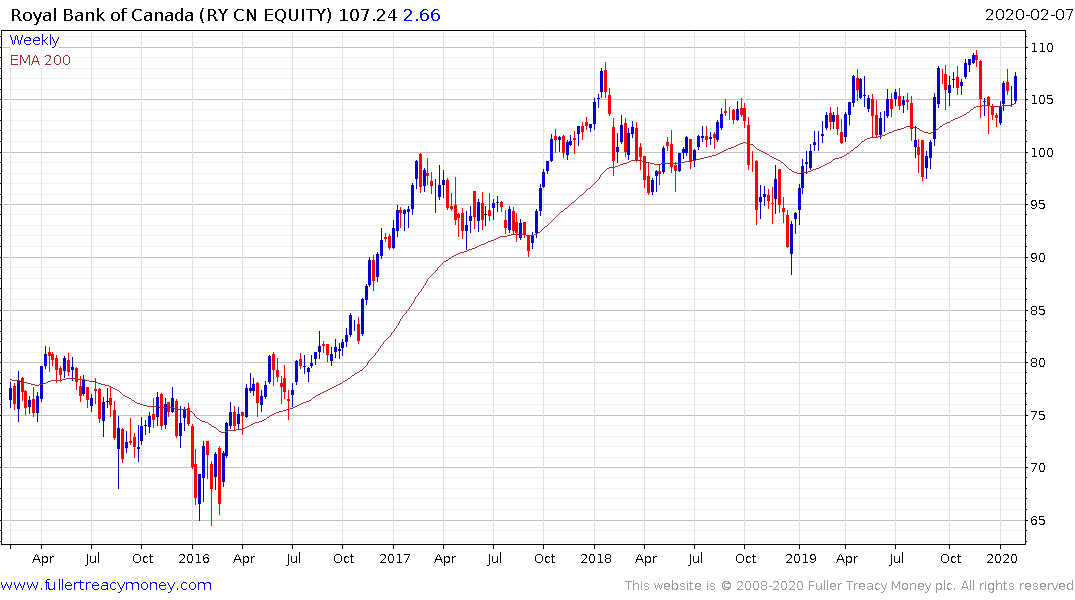 So far, the S&P/TSX Financials Index remains in a reasonably consistent medium-term uptrend. Royal Bank of Canada’s chart is almost identical to the Index. 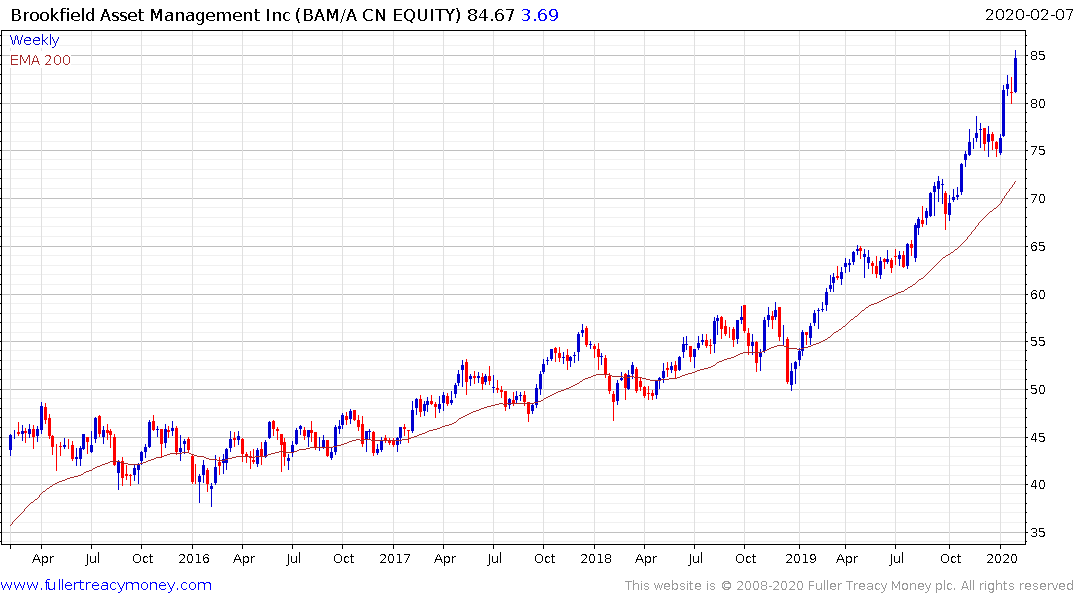 Meanwhile Brookfield Asset Management’s uptrend picked up pace in early 2019 and is increasingly overextended relative to the trend mean. The share’s performance over the last decade is a testament to the profitability of locking down asset and cashflows in one of the most liquidity-rich environments in history.