Chips and Geopolitics by Eoin Treacy

Second, at some point every tech company is going to have to make a choice between the U.S. and China. It is tempting to blame the tension between the two countries on Trump, but the truth is that China, particularly under Xi Jinping, has been significantly hardening its rhetoric and actions since before Trump was elected, and has been committed to not just catching but surpassing the U.S. in technology for years. There is a fundamental clash of values between the West and China, and it is clear that China is interested in exporting theirs. At some point everyone will be stuck in the middle, like TSMC, and Switzerland won’t be an option.

Third, Intel, much like Compaq, is an allegory for where the U.S. seems to have lost its way. Locked in an endless pursuit of efficiency and shareholder value, the U.S. gave up its flexibility and resiliency in favor of top-end performance. Intel is one of the most advanced chip makers in the world, but it turns out that capability is far too constrained to its own needs to be of general applicability. Worse, to the extent Intel was willing to become a contract manufacturer, it wanted the federal government to pay for it, the better to satisfy shareholders. The government, rightly, in my mind, chose an operator that was actually used to operating in the world as it is, not once was.

At the same time, TSMC’s justifiable carefulness in building a U.S. fab gives Intel an opportunity. Back in 2013, in one of the first Stratechery articles, I urged the company to embrace manufacturing and give up its integration, margins be damned. Intel specifically, and the U.S. generally, would be in far better shape had they acted then. As the saying goes, though, the second best time to start is now — and that applies not only to Intel, which should spend the money to get into contract manufacturing on its own, but also to the U.S. The world has changed, and it’s time to act accordingly.

Resiliency is likely to be the buzz word of the 2020s. Rising geopolitical tensions have been a factor for a few years already but did not have a great deal of urgency attached to them. The lockdowns and collapse of global supply chains highlighted the fragility of the global trade network, Meanwhile, the increasingly ambivalent tone of US/China relations are unlikely to get better any time soon.

I agree the clear conclusion for manufacturers is they will have to choose between the US and China. The big misstep China made during the coronavirus lockdown was to irritate Europeans by insisting on photo opportunities and positive press coverage in return for aid. They would have got the praise anyway but by making it a condition for assistance, it woke up many countries to the threat of a deeper relationship with a growing national socialist power.

Taiwan Semiconductor has paused in the region of the trend mean and will need to hold the low near $42.50 if potential for higher to lateral ranging is to be given the benefit of the doubt. 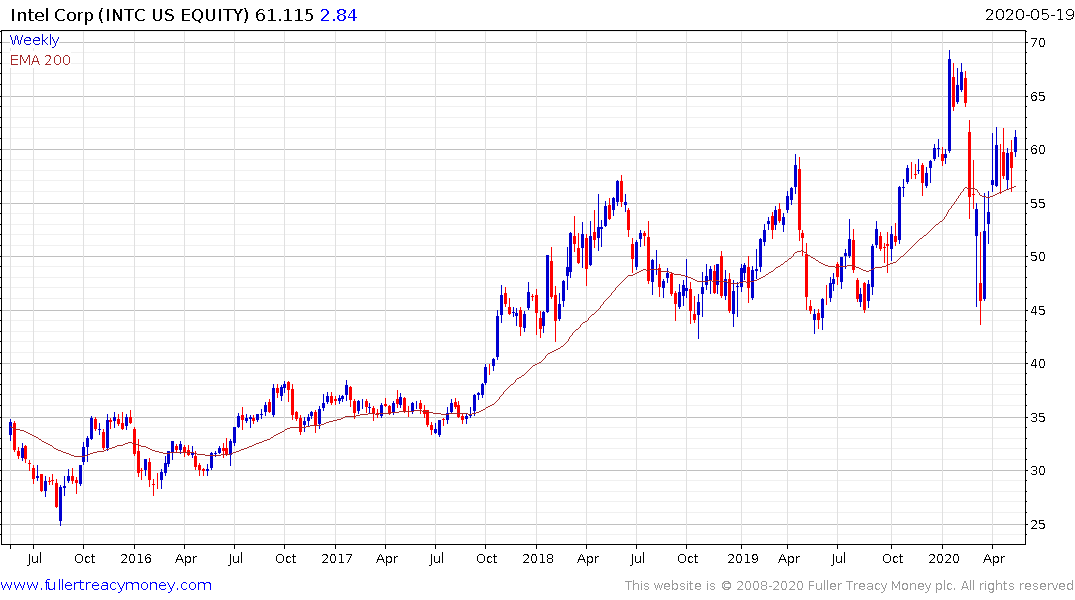 Intel has been largely rangebound for the last 30 months but is now firming from the trend mean and is on the cusp of breaking successfully above the psychological $60.