Output in the world’s largest auto market could be cut by more than 1.7 million cars should the spreading virus resulted in more shutdowns of manufacturing facilities across China, lasting into mid-March, according to an IHS Markit estimate last month.

The auto industry accounts for more than 80% of demand for the precious metal, according to a Johnson Matthey report released Wednesday. That makes it difficult for the market to ignore the shutdowns in China.

“The effects on the wider, global supply-chain are also starting to show,” refiner Heraeus Holding GmbH said in a research note. “Plants across Europe and the wider Asia region are also at risk now because of problems sourcing Chinese-made parts.”

The palladium market is another area where investors and traders are paying scant regard to the risk of a Chinese slowdown despite the fact prices are at elevated levels. 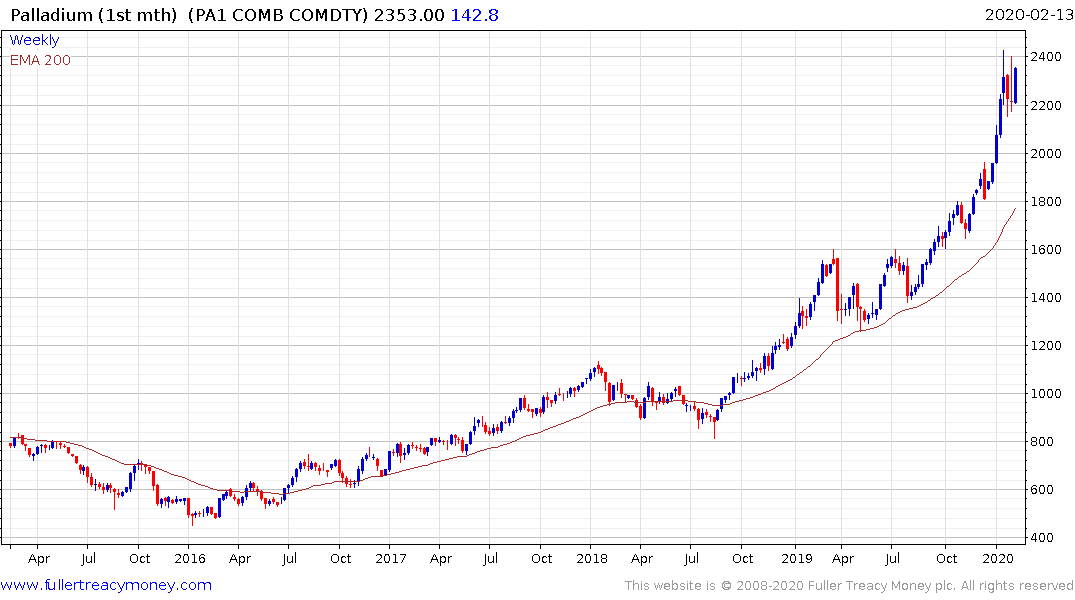 Over the last month palladium has posted two downward dynamics but the price has remained within its range; trading mostly between $2200 and $2400. This pause has is relatively similar sized to that posted in July/august and somewhat larger than those posted in November and December. 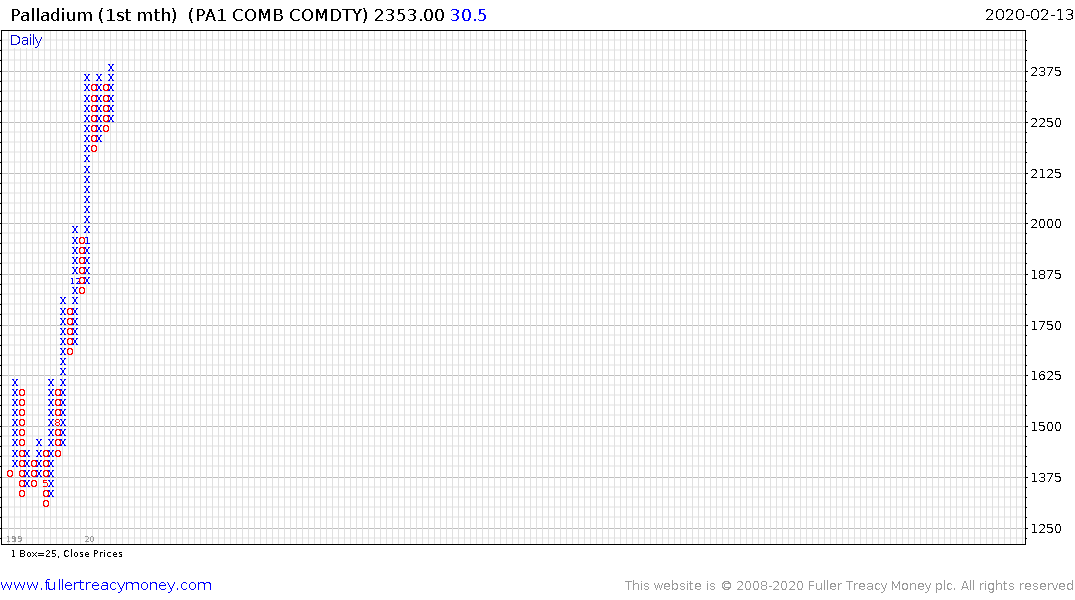 The 1% p&f chart gives us a clearly picture in terms of the consistency in the size of the pullbacks over the last year. While the price has been subject to move volatility recently, a reaction of more than seven units of scale would be required to both break the sequence of higher reaction lows and challenge that consistency. 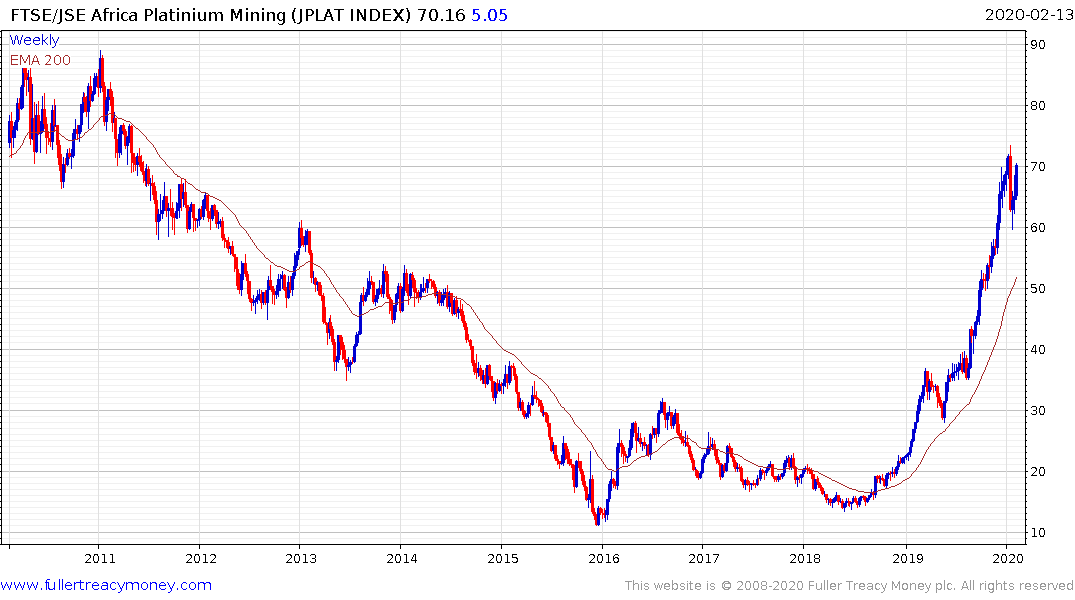 The Johannesburg Platinum Miners Index, which has been one of the primary beneficiaries of the surge in platinum prices, has bounced form the 60 area. A sustained move below that level would be required to question the consistency of the advance.

What is interesting, at least to me, is the willingness of investors to bet on the Eurozone suffering from the China slowdown while they are still ready to bid other assets higher. An alternative rationale is the Euro is now the carry trade currency of choice for speculators and that is responsible for the current downward pressure. 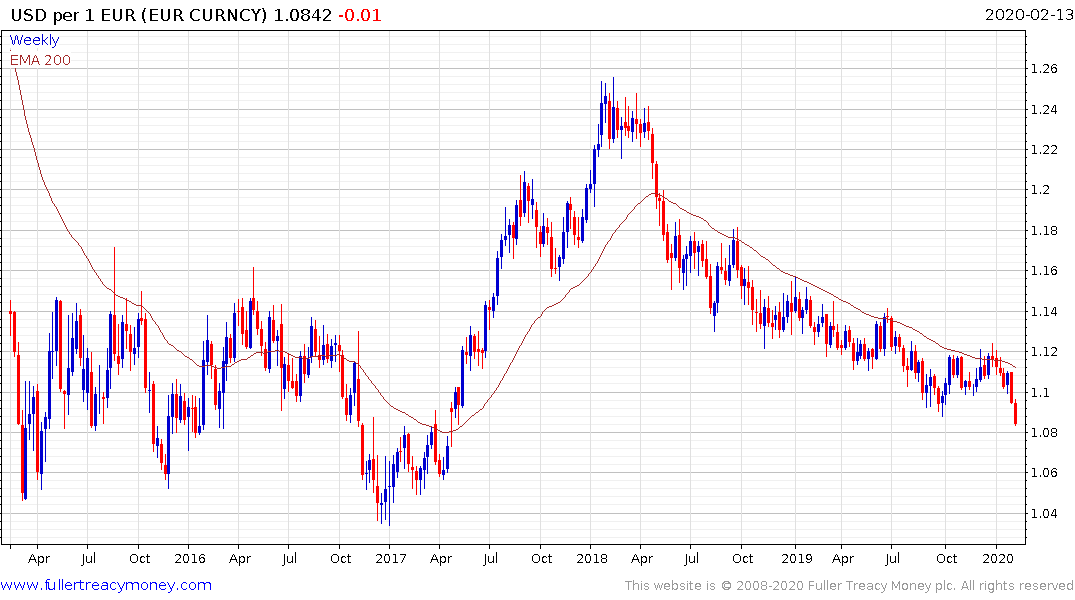 The Euro broke to new lows against the Dollar yesterday and extended the decline today to reassert supply dominance.