“We are fully capable and confident to minimize the impact of the epidemic on the economy.”

Lian also said that while the government would work to ensure the coronavirus didn’t spread further, it would encourage major projects and enterprises in good condition to resume work and production. Policy makers will also roll out measures to soften the impact of the epidemic on a case-by-case basis, especially to try to help industries that have been hit hard, Lian said.

Vice Commerce Minister Wang Bingnan said at the same press conference that many exporters in China have been resuming production, and local governments have been issuing policies to help small and medium-sized companies.

Authorities have pledged to provide abundant liquidity and there seems to be more easing measures in the pipeline. In an interview with the PBOC’s Financial News newspaper, central bank adviser Ma Jun said he expects the PBOC to push the interest rate for new loans lower and to also cut the rate for medium-term funding in February if it uses that facility mid-month, as it usually does.

If that were to happen, it would be a change to a “rather strong” easing bias for the central bank, according to Peiqian Liu, China economist at Natwest Markets Plc in Singapore.

The Chinese CSI300 Index opened down 9.1% today with the majority of issues down the 10% limit. While this is a headline grabbing phenomenon, which draws parallels with the pullback in 2015 and also in 2007, the reality is the mainland market is just catching up with the H-Shares in Hong Kong following an extended break to trading. 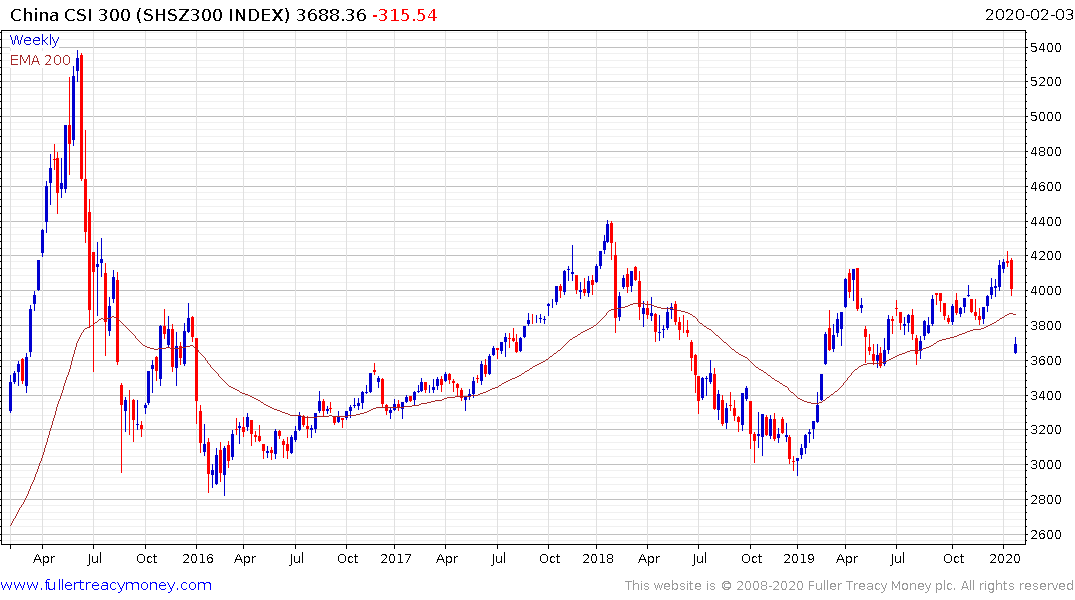 The missing ingredient for synchronised global monetary and fiscal stimulus have been China’s reluctance to pull on the traditional levers it has used to stimulate the economy and the reluctance of the Eurozone to aggressively stimulate.

China is now injecting liquidity, boosting infrastructure spending, easing the restrictions on shadow banks and easing stock loan rules. Meanwhile in Europe, Germany’s Jens Weidmann stated his willingness to pursue a more realistic inflation goal for the ECB. Any tinkering that allows for greater stimulus will be welcomed by markets.

It’s worth highlighting the rally posted by major US listed Chinese stocks today. Baidu found support in the region of the trend mean and has broken an 18-month downtrend. 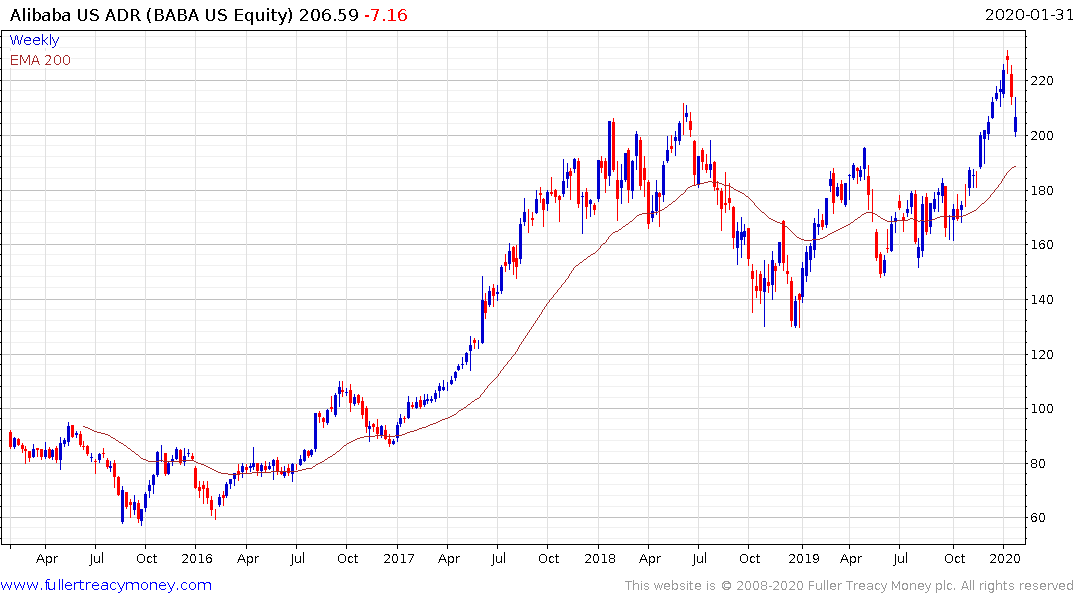 Alibaba confirmed support in the region of the upper side of the underlying trading range. 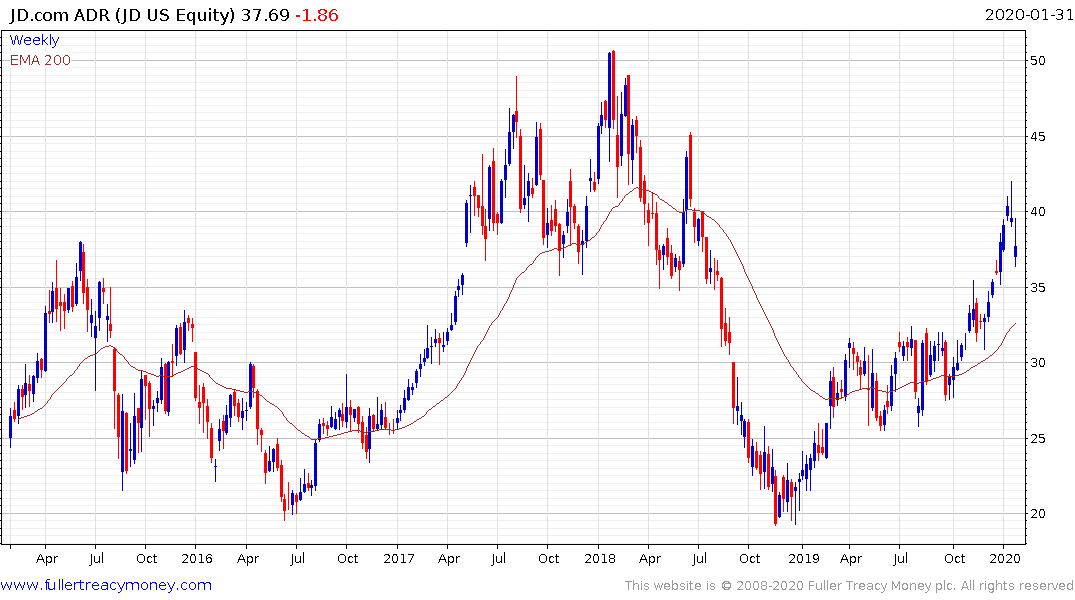 JD.com continues to trend higher in a reasonably consistent manner. 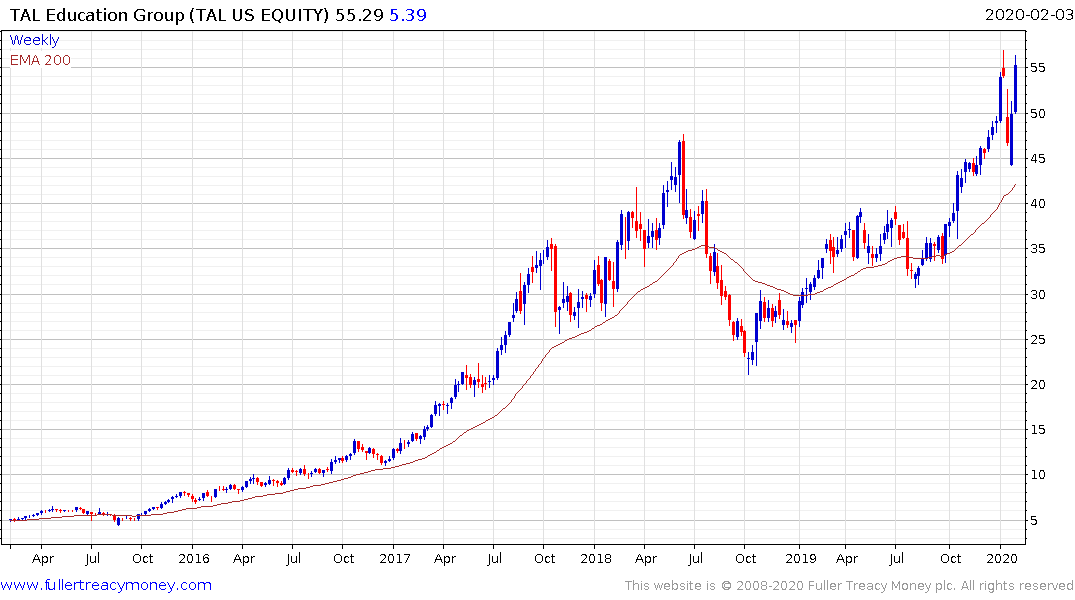 TAL Education followed through on last week’s rebound to retest its peak.

This kind of relative strength is notable because tech companies generally tend to respond most favourably to abundant cheap liquidity which helps to fund growth.