With more than $500 billion in infrastructure bonds to be issued this year and more monetary easing on the horizon, China is trying to cement a fragile domestic recovery without indulging in the kind of debt blowouts seen in the U.S. and Europe. The world’s largest exporter is therefore still reliant on other countries reining in the pandemic and on a reboot of global trade.

“We have not set a specific target for economic growth this year,” Li said, speaking in the Great Hall of the People. “This is because our country will face some factors that are difficult to predict in its development due to the great uncertainty regarding the Covid-19 pandemic and the world economic and trade environment.”

Shifting away from a hard target for output growth breaks with decades of Communist Party planning habits and is an admission of the deep rupture the pandemic has caused. Economists surveyed by Bloomberg expect China’s economy to expand just 1.8% this year, its worst performance since the 1970s.

At the same time, Li gave a precise figure for the targeted budget deficit, widening it to more than 3.6% of gross domestic product. Including the issuance of special bonds, that brings a broader measure of the deficit to more than 8%, according to Bloomberg Economics.

China’s growth rate has been decelerating for much of the last decade. At the same time the growth which has been achieved has been funded by increasing the debt load. From that perspective abandoning the growth target makes sense and not least because of the current recession.

A number of current activity indicators have returned to a semblance of normal. These include power generation and traffic flows but the missing ingredient is consumer spending. The decision to further tighten control over Hong Kong can be seen as an effort to defray domestic attention from the economy to try and boost nationalistic fervour. 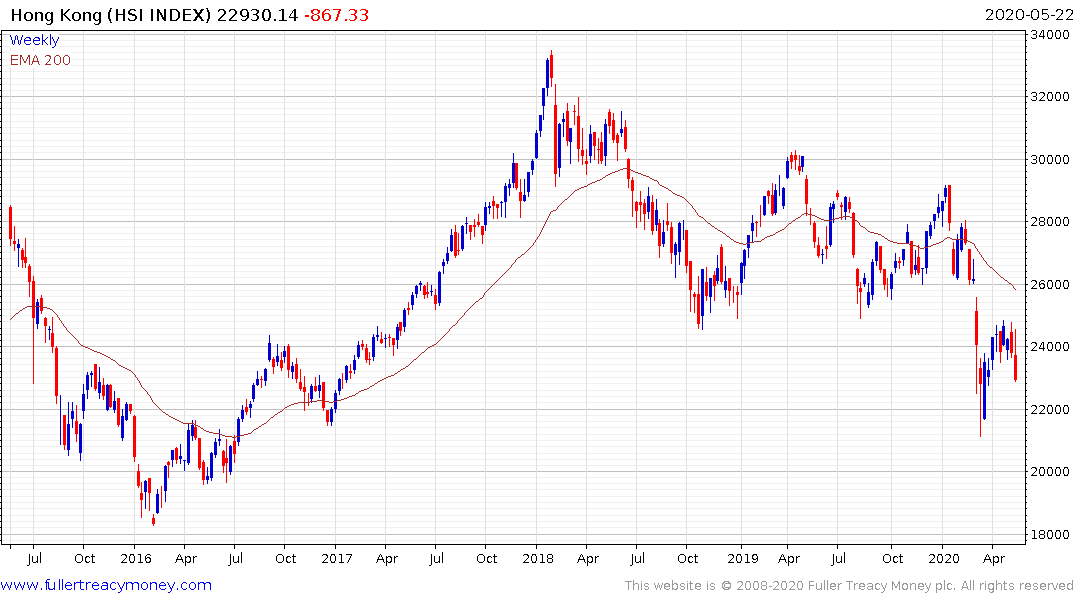 The Hang Seng dropped downwards from its short-term range today to confirm near-term resistance in the region of 25,000.