It is becoming clear that support for the time being is at best debt (or debt substitution from the market to the Fed, backstopped by the US Treasury), and not non-repayable grants. Debt dynamics on ever leveraging balance sheets suggest that CBs will have to always do more to support corporate debt, on top of the support that they will have to provide governments.

When there is a return to normality, corporate America will find itself in an even more leveraged position than the already highly leveraged position it was pre Covid19, which means that the rebound in equity and tightening of credit spreads will make these assets even more highly “valued”.

The misallocation of capital during the Japanese evergreening years had some very important consequences on growth and inflation, which are very well documented in various research papers (see BIS, NBER etc). The potential transfer of credit risk from the private to public sector through the government backstopping of bank loans, as well as the risk of good money being lent to bad, opens up Central Banks to the accusation that they will be carrying out an equivalent Evergreening of corporate debt as well as a not stemming the misallocation of capital that has allowed the rise of zombification, not only of negative but positive cashflow companies. I cannot think of anything more opposed to the doctrine of “Creative Destruction” laid out by Joseph Schumpter.

MARKET IMPLICATIONS
My core views remain that interest rates will remain “lower for longer”, supported by QE that will suppress real rates. For the time being, recent CB policy and statements don’t threaten that view, nor does the economic data being released. If anything, potential private and public sector debt increases cement that view.

The same goes for Gold – more CB intervention and support, necessitating a further increase of money supply above and beyond what the market expects, should support the value of precious metals. The significant decline in oil prices should finally allow the relative cheap miners to start outperforming gold – energy is a significant cost to gold extraction. The ratio of gold miners to gold is currently very depressed - chart below – finally there seems to be some miner outperformer (the ratio momentum has resumed its uptrend).

The moral hazard arising from bailing out badly managed companies only perpetuates the practice of running on razor thin margins and high leverage. Striving for market share and retaining zero capital on the balance sheet is an almost sure recipe for bankruptcy. However, that same practice has ensured companies are bailed out whenever the inevitable crisis strikes. Zombification is a significant risk which is only likely to be exacerbated with the current suite of policies. 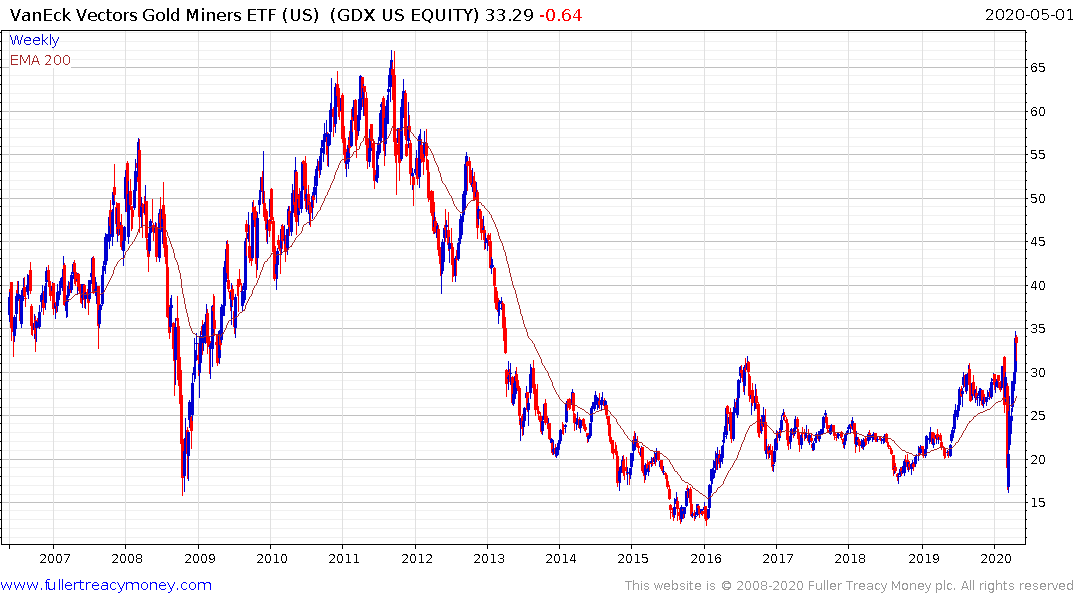 I agree that gold shares are among the most undervalued of all stock market sectors. The VanEck Vector Gold Miners ETF completed it is seven-year base formation last week and the upside can continue to be given the benefit of the doubt provided it continues to hold the region of the trend mean.