Canceled Stock Buybacks Mount, and They May Not Return for Years
Comment of the Day

Canceled Stock Buybacks Mount, and They May Not Return for Years by Eoin Treacy

The comment suggested his distaste for the practice predates the coronavirus outbreak and echoed criticism from Democratic presidential candidates who have long viewed buybacks as a waste and social ill.

“When we did a big tax cut and when they took the money and did buybacks, that’s not building a hangar, that’s not buying aircraft, that’s not doing the kind of things that I want them to do,” Trump said on Friday. “We didn’t think we would have had to restrict it because we thought they would have known better. But they didn’t know better, in some cases.”

Trump said he would support a prohibition on buybacks for companies that receive government aid. The five biggest U.S. airlines -- prime targets for bailout funds -- spent 96% of their free cash flow on repurchases over the last decade, money that could have been used to build rainy-day funds. Overall
buybacks started to slow in the first couple of months of the year in the U.S., when they were $122 billion in January and February, down 46% from a year earlier in the slowest start to the year since 2009.

While some viewed share repurchases as one of the driving forces behind the bull market, the practice was constantly criticized, particularly in populist circles. Companies were simply inflating their stock prices inorganically, using cheap money in the process, so the argument went, exacerbating wealth inequality as the ultra-rich cashed out.

Buybacks have been the primary source of demand supporting the market, particularly during pullbacks, over the last decade. The problem with relying on buybacks as a rationale for being bullish is they are inherently procyclical. The majority of companies are not in a position to buy back shares following big declines. Additionally, since debt loads have increased, at least in part to fund buybacks, they are overleveraged at peaks and debt obligations come before equity during a downturn.

Ed Yardeni has done some impressive research on how the number of outstanding shares has not contracted over the last decade despite the trillions spent on buybacks. New issues, from IPOs, is one source of new supply but that is dwarfed by the scale of stock options issued to management teams. This practice is likely to come under increasing focus following the decision to ban buybacks for a year after a company pays back funds borrowed from the US government.

The S&P500’s follow through today on yesterday’s upward dynamic confirms a short-term low and increases scope for a further reversionary rally. Today, there are plenty of buyers and bargain hunters to drive a rebound but the question of where new demand comes from will be a bigger question once oversold conditions are unwound.

The difference between the S&P500’s yield and that on Treasuries has contracted by 40 basis points over the last couple of days but is still close to the widest spread in its history. That strongly favours equities for yield investors.

That payout is likely to come from a declining number of shares as the full effects of the impending recession wend their way through the economy. I found this graphic very interesting both for the absolute low number of companies that completely alleviate their dividend and also that the number is close to that seen in 2008. One of the reasons the number of companies counted is so low is because weak companies are dropped from the Index.

Here is the description of the Invesco Buyback Achievers ETF:

Invesco Buyback Achievers ETF is an exchange-traded fund incorporated in the USA. The Fund tracks the NASDAQ Buyback Achievers Index which holds US securities that have affected a net reduction in shares outstanding of 5% or more in the trailing 12 months. The Fund is reconstituted annually in January and rebalanced quarterly in January, April, July and October. 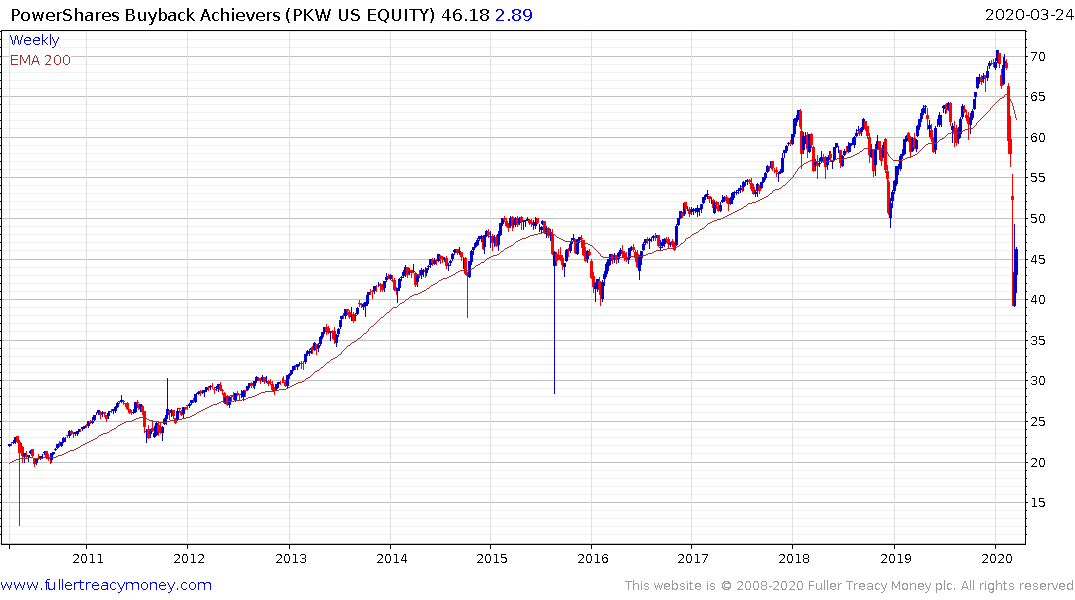 The fund is next going to be reweighted in April and relies on a 5% reduction in outstanding shares on a 12-month trailing basis therefore it is likely there is going to be a considerable reduction in the number of companies covered over the coming two quarters.  I’m posting the constituents because when it was last updated about 18% were trading with negative free cashflow. That suggests a heavy reliance on debt to fund buybacks which is now in danger.