Can I Interest You in a 100-Year Boris Bond?
Comment of the Day

Can I Interest You in a 100-Year Boris Bond? by Eoin Treacy

The U.K. has the luxury of a deep investor base that hoovers up long-dated, fixed-income assets to make sure it can meet its future pension and insurance liabilities. So much so that the yield on 50-year Gilts is lower than that of their 30-year counterparts, meaning there’s a so-called inversion at the long end of the U.K. yield curve:

The average duration of British government debt is much longer than that of its main counterparts; it’s about 14 years, compared to nearly nine years for German bunds and less than seven years for U.S. Treasuries. There is evidently investor demand in the U.K. for longer stuff, but it requires a genuine commitment from the government to stay the course and not leave any ultra-long issue stranded at the end of the yield curve.

Doing a 100-year deal in concert with more 30- to 50-year issuance would make sure there was plenty of interest at various maturities at the long end of Gilts. A century bond could rapidly build scale into the tens of billions of pounds with quarterly auctions, perhaps with a coupon of about 1.5% (by comparison, Austria’s 100-year issue went for 1.17% back in June). This would be a super-cheap way to really commit to some of the biggest infrastructure projects, such as connecting rail links properly in the north of England.

Borrowing vast sums at record low rates makes sense if the proceeds are invested in growth promoting endeavours like education, critical infrastructure and primary research. If invested in glamour projects and growth hindering strategies like high cost energy or military hardware then the benefits which accrue will be less impressive. One way or another, fiscal austerity is over and that means the government will have a growing and ongoing funding requirement.

The interesting point about the UK bond market today is the Bank of England’s base rate is 0.75% and the 10-year gilt yields 0.78%. A 3-basis point pick-up over a decade is suggests bond investors are unwilling to give even a modicum of credence to inflationary fears. 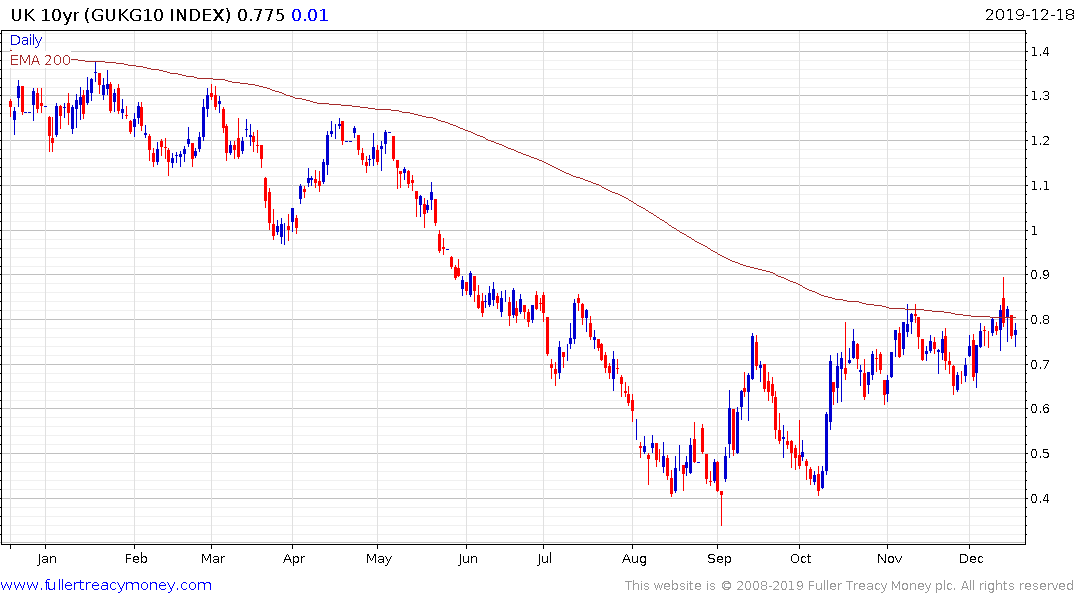 The UK’s yield curve today looks like the USA’s did in August with a significant belly in the curve starting 12-months hence. That is pricing in a rate cut within the next year but we need to ask ourselves how likely that it? The economy is likely to get a boost from the trade war hiatus and dispelling some uncertainty surrounding Brexit is also a net positive. With global growth likely troughing, it is unlikely the UK will need to cut rates. That suggests the rich levels at which Gilts are trading is unlikely to be sustained.