Bad Loans in Europe Tumble, but They Are Never Fully Gone
Comment of the Day

Bad Loans in Europe Tumble, but They Are Never Fully Gone by Eoin Treacy

You are pushing out the door the risk, but part of this risk comes back in through the window,” said Massimo Famularo, a Milan-based adviser on bad-loan deals.

The ill-health of Europe’s banks is a drag on the economy and a factor for why the area has yet to fully bounce back from the crisis. When banks retain exposure to bad loans rather than selling them outright, they have less capital to back fresh lending to the economy.

Lending growth has been weak in countries with the most nonperforming loans, or NPLs, such as Italy, Portugal and Greece.

“The sale of NPLs is good for the balance sheets of the banks, but it doesn’t solve the NPL problem in the system,” says Giovanni Bossi, former chief executive of Italy’s Banca IFIS SpA. He estimates only a small portion of the disposed loans has been worked out by their buyers.

The nonperforming loan problem in Europe is half the size it was at the height of the crisis. There are two ways of looking at this development. The first is the easy to exit loans have been dispensed with, so the second half must be stickier and, therefore, harder to deal with. The other is that real progress is being made but it is not as quick as many would like.

The biggest obstacle to growth in the European banking sector is the absence of an interest rate margin and trillions in negative yielding debt. That is why the ECB is considering additional purchases of bank debt in any future round of quantitative easing.

The ECB is a long-term holder of debt and therefore is precluded from purchases of bonds with negative yields which are sure to provide a loss on maturity. It needs a yield and there is not much in Europe that comes close to a sound credit which has a positive one.

There are conflict of interest arguments about the central banks regulating the financial sector and also owning its bonds, so Chinese walls would be necessary if this policy is adopted.  What is clear is banks need some form of assistance to help them through the reality of negative interest rates, once adopted. 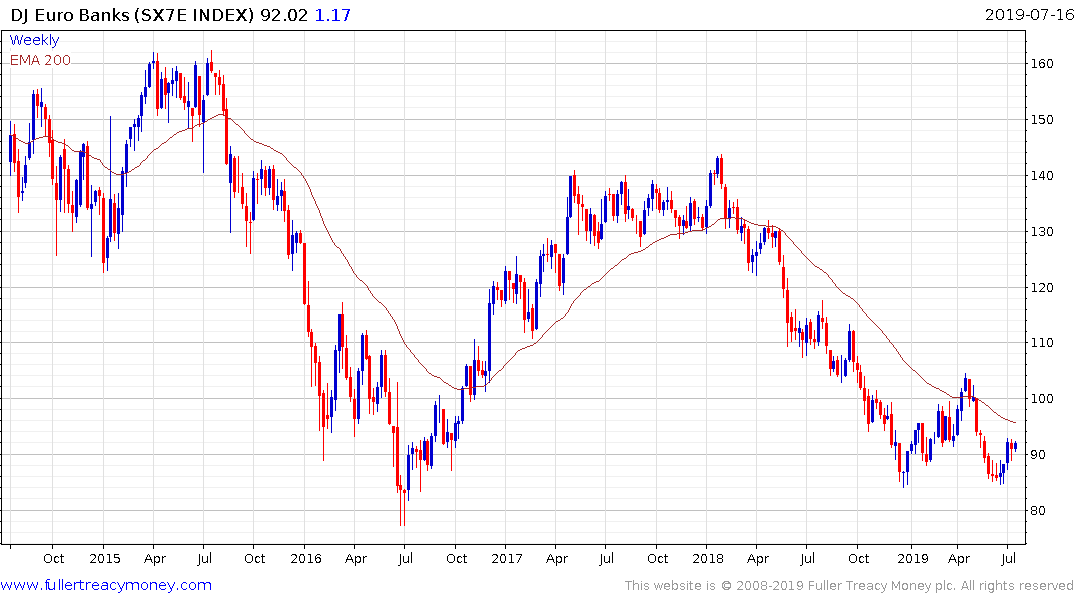 The Euro STOXX Banks Index found support in the region of the lower side of the developing base in June and is now back testing the region of the trend mean. A sustained move above it would confirm more than a short-term return to demand dominance.