Back to school, miners league table
Comment of the Day

Back to school, miners league table by Eoin Treacy

Vedanta's planned group restructuring was completed in 2H13 calendar, with the court clearance of Sterlite's merger into Sesa Goa. This was an important step in simplifying the group's structure, reducing the scope for future conflict between majority and minority shareholders. Post the merger of Sterlite and Sesa, we see the group's buyout of the Indian government's stakes in HZL and Balco as critical for maximising cash fungibility across all group entities and expect progress on this in the next 12 months. Beyond this, management has set three near-term priorities for improvement for the group: an iron ore mining re-start, bauxite sourcing in India, and Copper Zambia development. We expect all of these areas to show improvement in 2015. Buy.

Valuation
Our price target is set at a 5% discount to our DCF valuation, to reflect some of  the inherent delivery risks within Vedanta's growth plan. Our DCF valuation (10.9% WACC - cost of equity 13%, post-tax cost of debt 6.1% and target gearing 30%: RFR 4.0%, ERP 6%)is calculated using life of mine cash flow analysis.

Risks
Key downside risks include lower metal prices than we expect, sustained strength in the Indian rupee, higher import duties, slower execution of projects and the slow or noreceipt of government permits for the alternative bauxite mines in Orissa and the Lanjigarh refinery expansion programme. The company has a large capex program which may require further debt funding or capital raising, either at the Sterlite or Vedanta level.

The new Indian administration under Narendra Modi has lofty ambitions. Urbanisation, export oriented manufacturing and chipping away at the country’s infrastructure deficit are all goals the new government is working towards. Greater per capita consumption of just about all industrial and energy commodities goes hand in hand with these objectives and India needs a concerted strategy for sourcing the resources it needs to fuel growth. 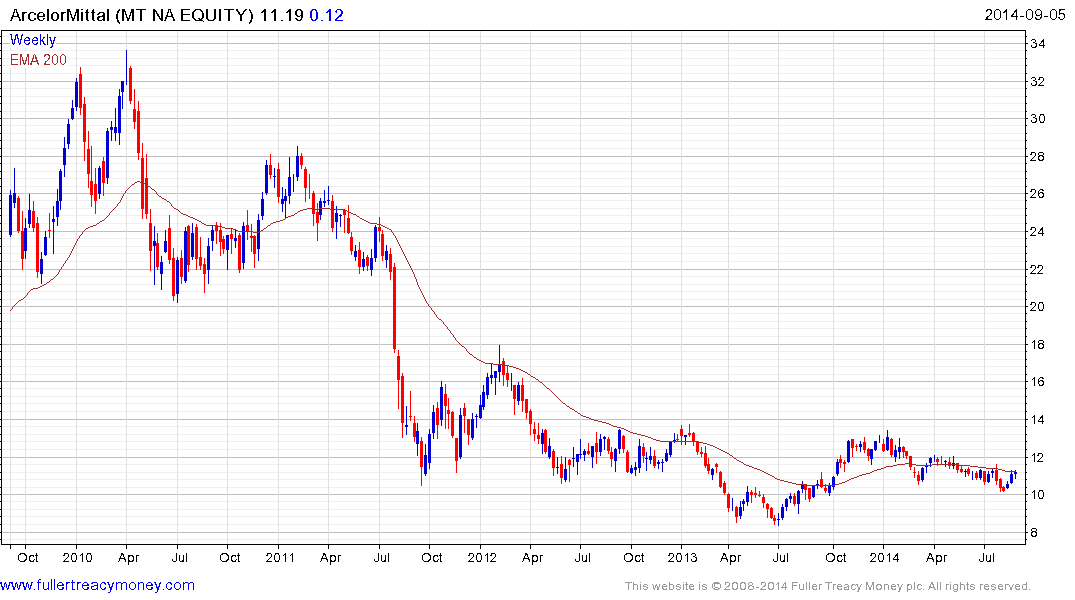 Despite the fact that the Mittal brothers acquired Arcelor to form one of the world’s largest steel companies, India represents a negligible contribution to the company’s balance sheet. As India’s per capita consumption of the alloy increases this can be expected to change. The share has been ranging with a mild downward bias since 2012 but found support three weeks ago in the region of €10 and a sustained move below it would be required to question current scope for continued higher to lateral ranging. 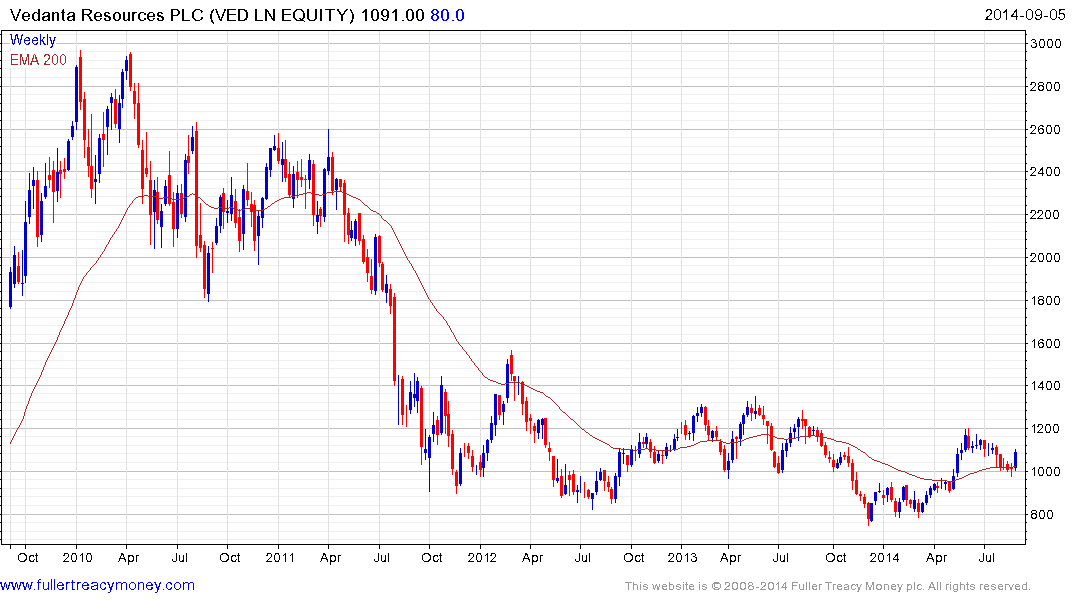 Vedanta remains within a three-year range but firmed this week from the region of the 200-day MA and a sustained move below the 1000p level would be required to question medium-term scope for continued higher to lateral ranging. 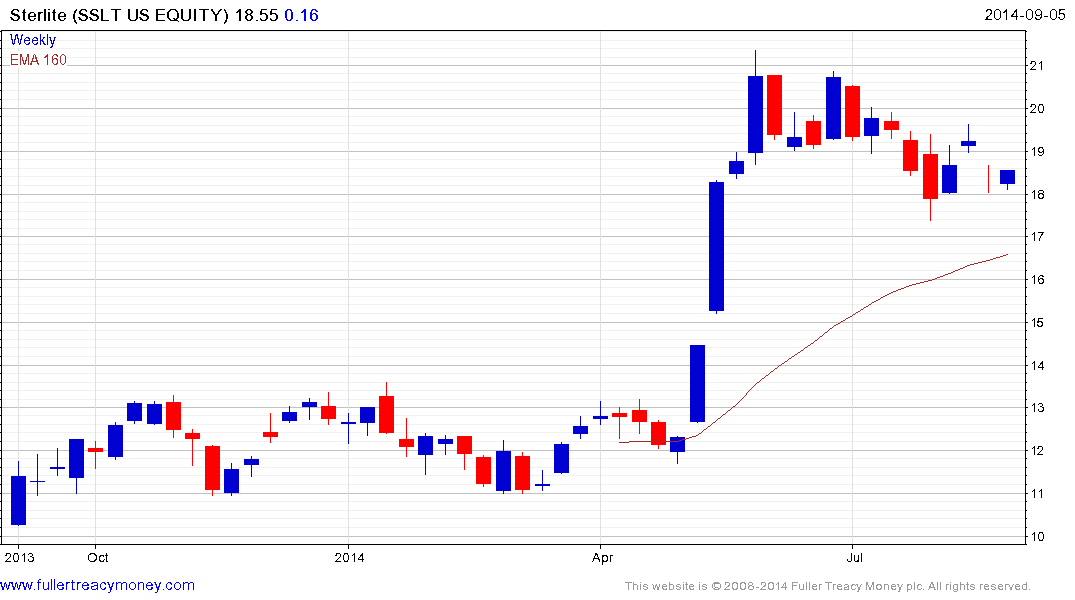 Sterlite maintains a US ADR and also found at least short-term support this week in the region of $18. 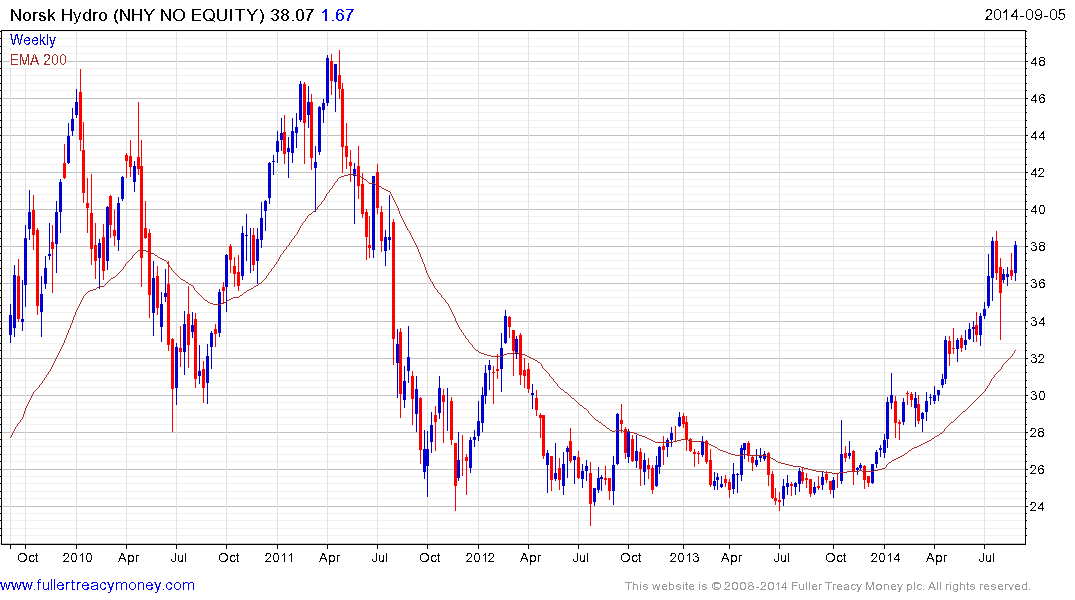 Among other shares covered in the above report, some of the more interesting chart patterns include:
Norwegian listed Norsk Hydro completed a two-year base in February and a first step above it in June. A sustained move below the 200-day MA would be required to begin to question recovery potential. 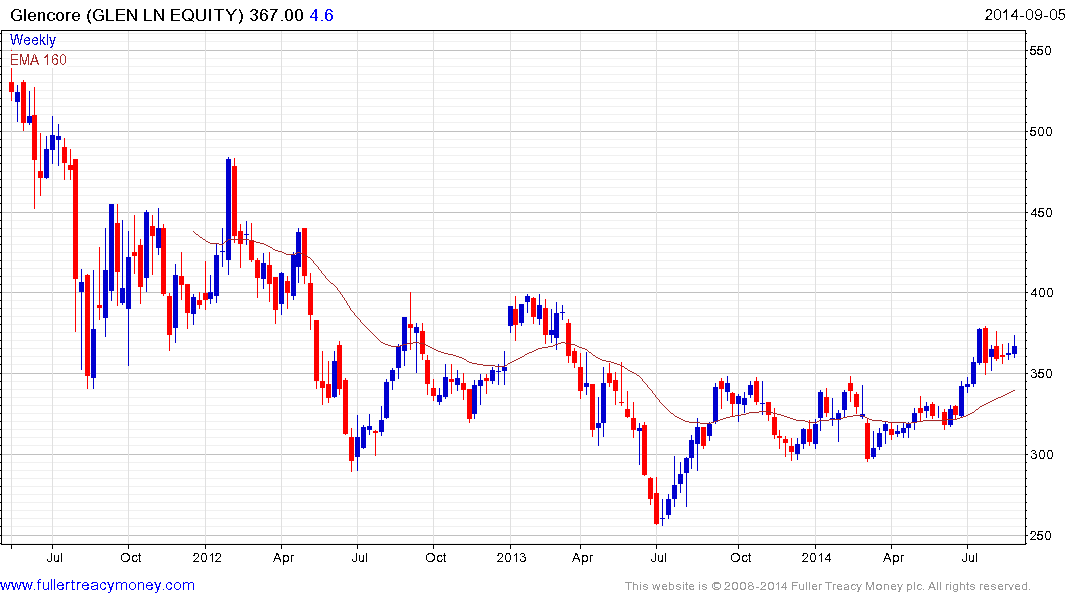 UK listed Glencore rallied in July to break the progression of lower rally highs evident since its IPO and a sustained move below 330p would be required to question medium-term scope for continued higher to lateral ranging. 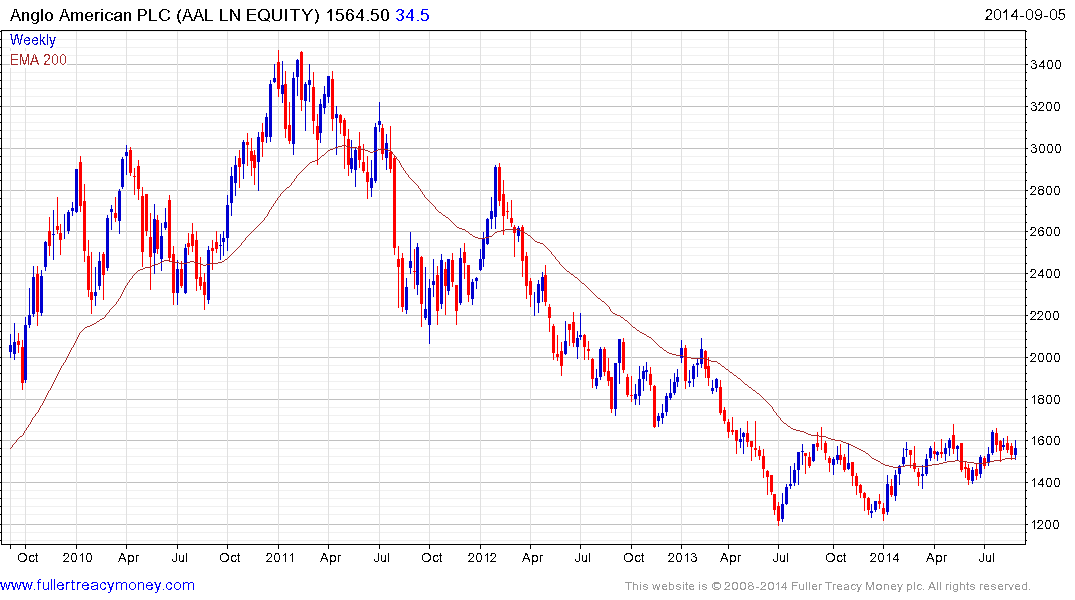 UK listed Anglo American has held a progression of higher reaction lows within its base and found support this week in the region of the 200-day. 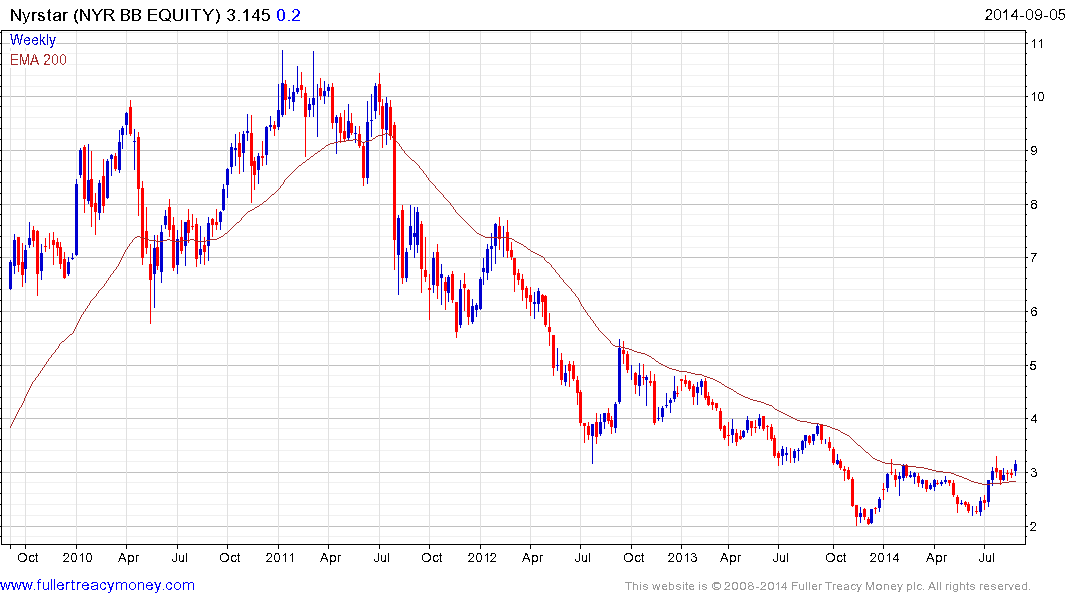 Belgium listed Nyrstar rallied in July to break the three-year progression of lower rally highs and has been ranging above the MA since. A sustained move below €2.75 would be required to question recovery potential.