The worry about China is the sustainability of its debt-fuelled economic growth. The basic weaknesses of the Eurozone are that it still doesn’t have a backstop for its rickety banking system and that it lacks a shared fiscal capacity; what’s more, Italy’s finances are so weak that they continually threaten to upset European solidarity. In the US, the national institutions of economic policy actually work: they demonstrated this in 2008 and are doing so again now. The Fed and the Treasury exert a huge influence not only over the US economy but the entire global system. The question is how they stand in relation to a profoundly divided American society and how their technocratic style of policymaking is received by the know-nothing nationalist right wing of the Republican Party and its champion in the White House.

Over recent years, each of these weaknesses has at various times seized the attention of the fund managers and business leaders who direct global business, and the experts and technicians who advise them. It isn’t a secret that China’s debt bubble, Europe’s divisions and America’s irrational political culture pose a challenge to the functioning of what we know as the world economy. What caused the panic last month was the realisation that Covid-19 has exposed all three weaknesses simultaneously. Indeed, in Europe and the US the failure of government has been so severe that we now face a public health catastrophe and an economic disaster at the same time. And to make matters worse, Donald Trump appears tempted to juggle the two.

This article decries the reliance of economies on central banks largesse. I think most of us have some sympathy with the fact that the swamping of asset markets in liquidity is not the most ideal scenario because of the risk of mispricing and misallocation of resources. However, it is the reality we are dealing with.

The total assets of central banks have increased by in excess of $4.6 trillion in only a few months. The running total of deficits posted by the major economies is running at a quarterly $1.9 trillion. The promise of support for the corporate bond market has resulted in $1 trillion of issuance.

On top of all that the flood just keeps coming. Japan announced $1 trillion in stimulus last week. The EU has announced $750 billion of support for peripheral debt markets. Most countries are running large deficits and printing the money to pay their bills. It’s not unreasonable to put the total for assistance since February at about $10 trillion, with more than half originating in the USA.

The interest rate differential the US Dollar enjoyed for the last few years has now been eroded which removes a significant support for the currency. Meanwhile the willingness to spend without regard for how debts will be repaid is taking a toll on the currency. The Dollar Index has now broken support in the region of the trend mean and a sustained move above 99 will be required to question potential for additional weakness. 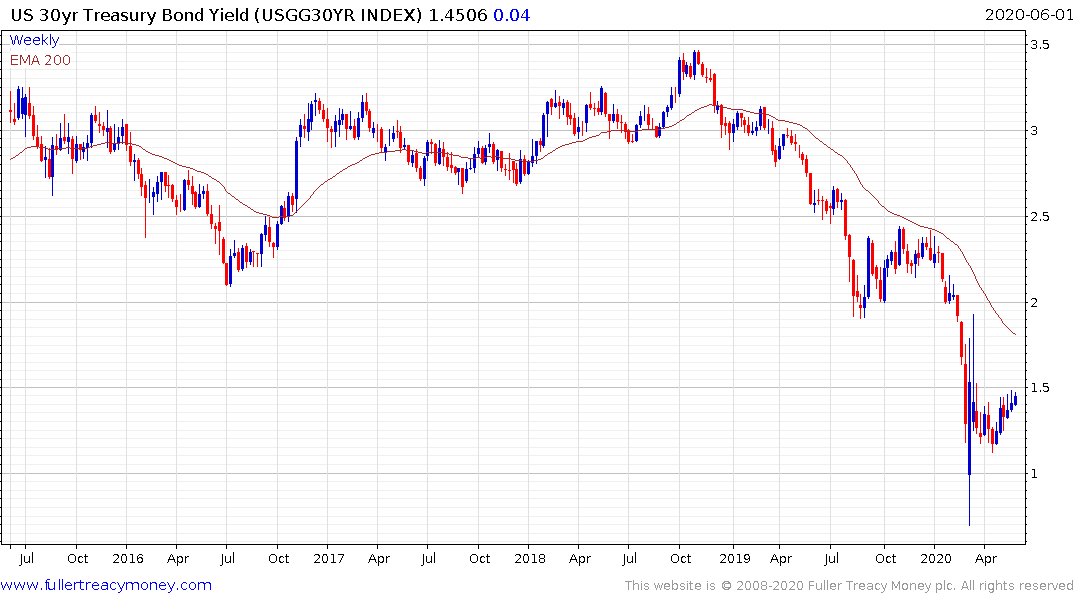 US Treasury yields have been very inert for the last couple of months but that condition will not persist indefinitely. The yield curve is starting to steepen with upward pressure on 30-year yields. It is currently testing the 1.5% level and a sustained move above 2% would probably represent a pricing in of inflation risk.

The relative attraction of non-US Dollar denominated assets is being burnished by the greenback’s weakness.