2020 JPM Macro Quantitative and Derivatives Conference
Comment of the Day

The long term hope for value as a factor comes from a burst of inflation and higher rates and therefore discounting the longer dated cash flow that growth companies have. This does not feel imminent but could be possible if in the next few years de-globalization gains momentum and/or further longer term effects from COVID-19. There is a value component to be captured in the market but not necessarily low P/B and P/E. Value and Growth are not polar opposites. Value has lagged not necessarily because it’s out of favor but because best performing 'value' could be high forecasted growth and no current profits, which leaves more rationally priced stocks behind. There’s been more factor crowding, which will also likely be impactful.

The speaker argued that we still have a VIX double the historical long term average therefore running smaller notional positions vs. 6 months ago. Any risk exposure should be relatively small right now. Recent realized volatility of those portfolios has been high. Usually the market moves inform the risk but in Feb 2018, the VIX threw the market. Before 2004, VIX was an indicator. Once it became tradeable, volumes were relatively small therefore unlikely to be impacting itself. Since VIX is modeled off of a variance swap, it is heavily weighted towards deep out of the money options that do not trade that often. VIX has become less of an indicator over time but more of something that drives itself. The impact of VIX on out of the money options has been significant. People using it as an indicator need to recognize that it has a feedback loop built in. This will likely result in a higher than average VIX, that will be reflective of market strength.

A point I have made repeatedly over the years is when it comes to designing an algorithmic trading system you can decide what to buy or sell in any manner of cases but you can only decide how much to buy with a very small number of tools. 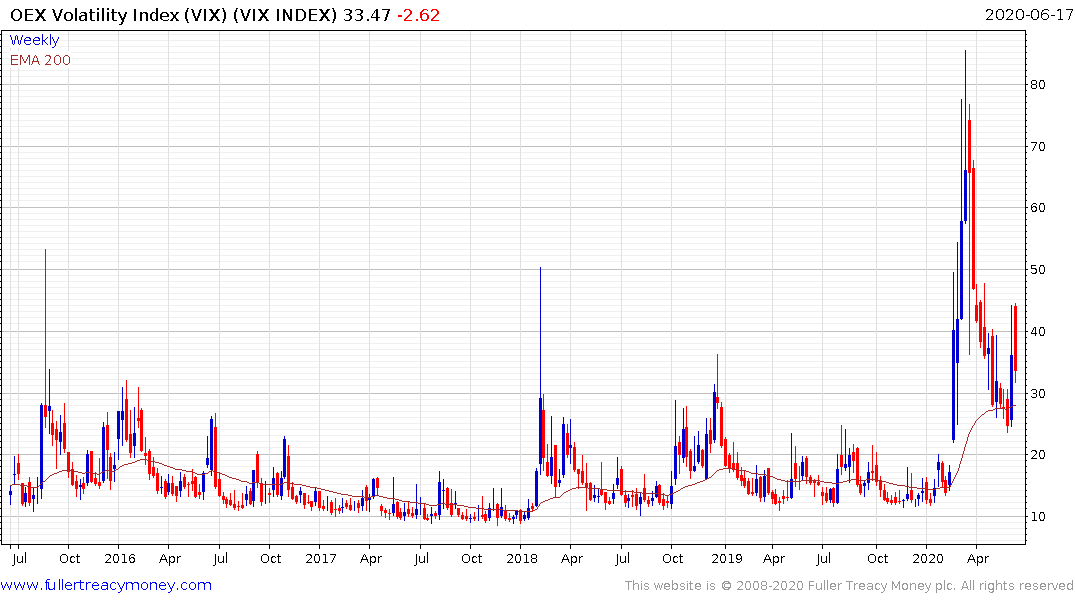 The VIX Index continues to hold the 30 area and a sustained move below the trend mean will be required to signal a return to a full risk-on mode.