In 55 years of observing markets, we have NEVER seen such a downside capitulation as October 2008; and, we have believed we are in the biggest secular bull market of my lifetime!  This morning Chinese Foreign Ministry spokeswoman Hau Chunving said, “China will not accept any kind of extreme exertion of pressure, intimidation or blackmail. Neither will China give in an inch on major issues of principle.  Now it's time for Washington to show sincerity and demonstrate to the world that the US is still a reliable partner that can carry out negotiations.”  And with that the renminbi is at decade lows versus most currencies.  Such action has the preopening S&P 500 futures off some 40-points . . . Good Grief! 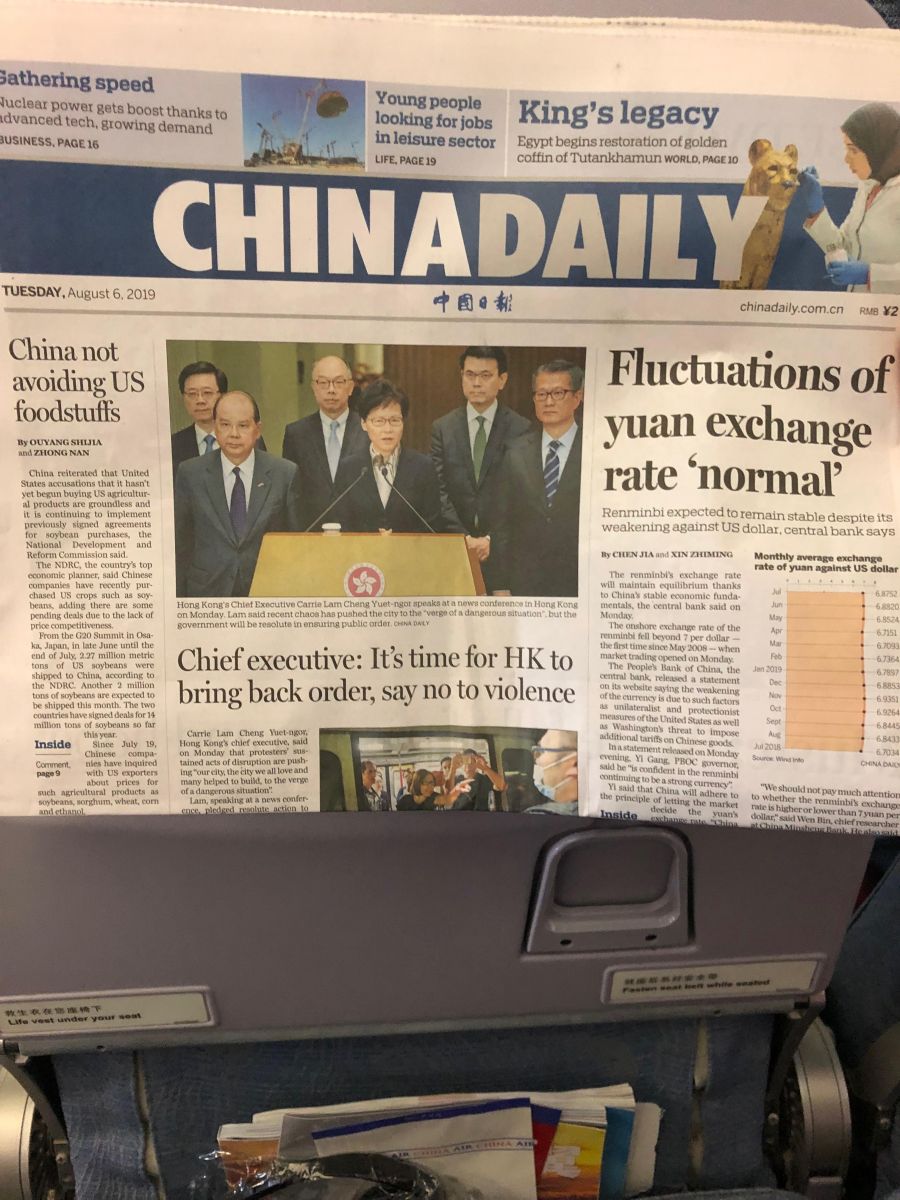 This was the front page of the China Daily newspaper on the flight from Beijing to Guangzhou yesterday. The drop below CNY was normal currency activity, there is a clear need for peace to spontaneously break out in Hong Kong’s protests and apparently China is not avoiding US agricultural exports. This is just one more example of how the same news can be spun in a number of different ways. 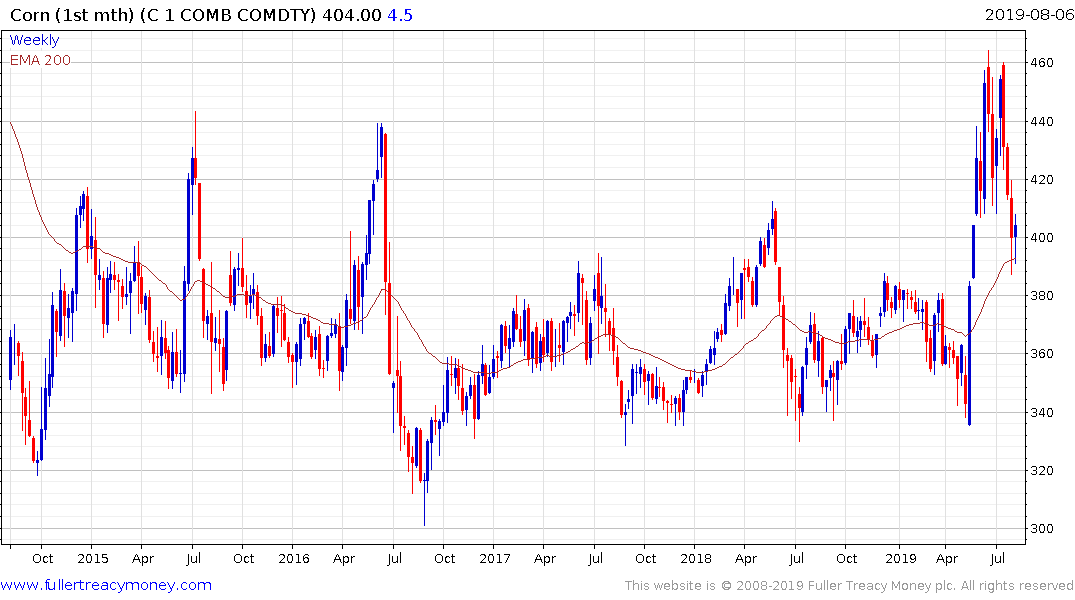 The other way of describing the China Daily reporting is as propaganda. If China were indeed buying US agricultural goods it would show up in commodity prices. Corn prices have come back to test the upper side of the underlying base formation. If a return to demand dominance beyond the short-term is to be reasserted it will need to find support soon. 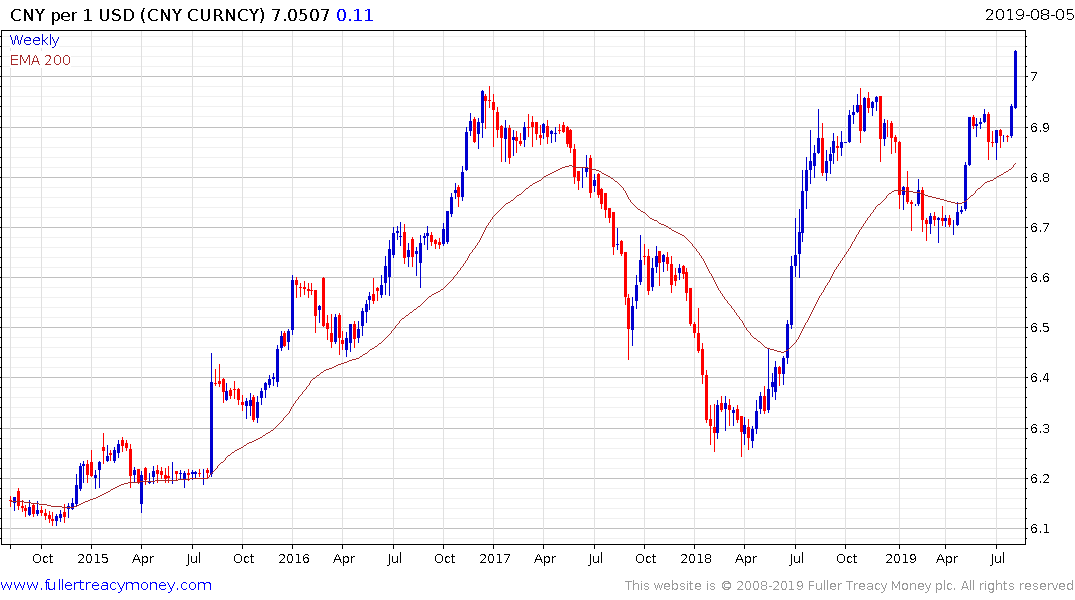 The Yuan was a little steadier today not least because China cannot afford to risk capital flight. Nevertheless, it is quite unlikely we are going to see it trade stronger than CNY7 any time soon. The simple fact of the matter is China has a weakening economy and all other factors being equal the currency would be weaker than it is today without government support. The trade war provides handy cover for a devaluation. 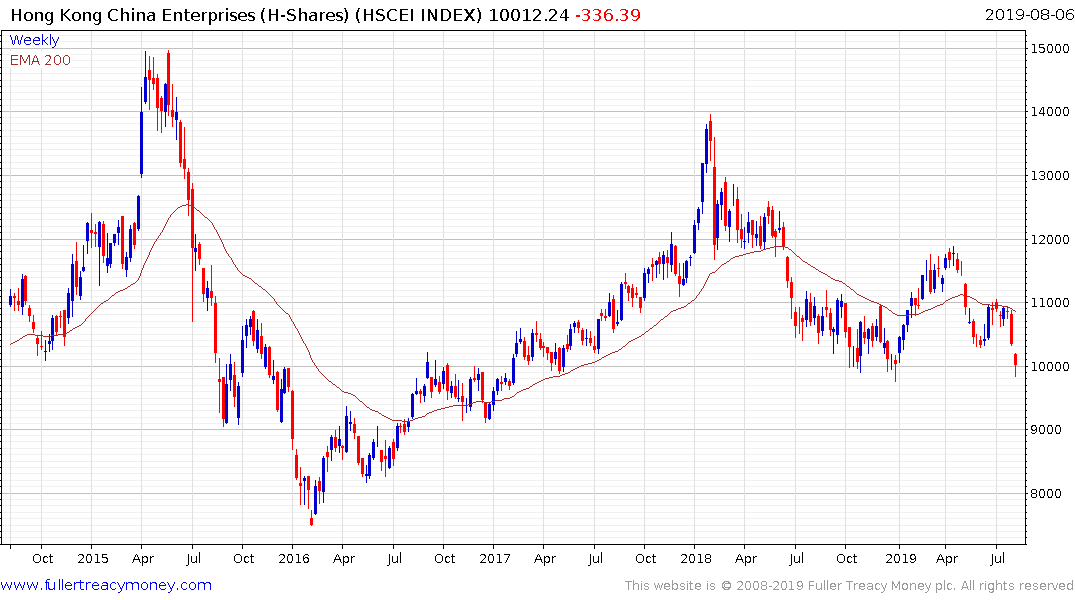 I continue to think the risk of military intervention in Hong Kong is underappreciated. In fact, there is some logic to the argument the protestors are being more ambitious in their demands because they want to force the central government’s hand into a heavy-handed attack. They may be hoping, probably vainly, that would spur international support.