'The common enemy' by Eoin Treacy

During the global financial crisis, banks were at the epicenter of the problems, generating a great deal of public anger. This time, there are no bankers to blame for the crisis. In fact, they can be part of the solution by providing relief to private companies and individuals that are badly hit by the crisis. We observe that:

Bank balance sheets are in better shape running into this cycle than they were in the global financial crisis.
Banks are not at the root cause of this crisis; rather, they are needed to stem the acute global liquidity crisis.
Various forbearance measures by banking regulators will help spread NPLs (non-performing loans) and provisioning over a longer period and, more importantly, give banks room to prevent otherwise creditworthy corporates from failing due to an acute drop in economic activity.
The decision by regulators to lower capital requirements and allow banks to temporarily operate below minimum requirements indicates that there is no immediate intention to bail in banks. Doing so would in any case not solve the pressing current need to try to cushion the immediate economic downturn.  The longer-term impact of ECB measures may be the intertwining of sovereigns and banks once again – the so-called sovereign-bank nexus. The cost of extraordinary support today, will likely emerge tomorrow in the form of more directed lending and increased holdings of sovereign bonds.

Outside the banking sector, it is not clear what pound of flesh governments may demand for special support for affected sectors (e.g. airlines). It is clear that in some other sectors where leverage was too high (energy) or secular forces too powerful (e.g. retail), there will be defaults and restructuring. Default rates are never zero in a recession, regardless of what caused the recession, and this remains true no matter how much solidarity is generated by current events. In both financials and nonfinancials, individual issuer analysis now becomes more important than ever. Where one is positioned in the capital structure will matter too – amplifying returns in the consequent bull market for the winners, leading to haircuts, below-par buybacks or debt-for-equity swaps for the losers. Correlations tend towards 1 in bear markets, amid indiscriminate sell-offs, but they don’t during recessions and bull markets: rather, from here, successful credit portfolios need to avoid the losers.

In short, the fundamentals are clearly weak. A deep recession and lots of uncertainty will be with us for some time. But it is evident that we are in the phase of fear, panic and loathing (see our cycle chart). Regarding policies to soften the blow, expect fiscal support of over USD 1 trillion in each major economic region.

Corporate defaults are inevitable considering the leverage in the system and the sudden disappearance of revenue for many companies. Where companies had borrowed heavily to fund acquisitions or buybacks, they now have to make debt payments with no, or much reduced, incoming revenue. That is an obvious problem particularly affecting some of the most indebted tourist, auto and aeronautics companies. The biggest challenge for banks will be in how exposed they are to small companies on a local level because many are now in dire financial straits.

The biggest question is how lengthy the recession is likely to be. The stock market has already priced in a significant contraction with many mid cap sectors down in the region of 40 - 50%. That has excised any growth and a lot of leverage from valuations. The pace of technological innovation is delivering on new solutions to both treatment and containment on a near daily basis and these measures will gain traction soon. The most important point about quick testing, better drug treatments and wider availability of respirators is the potential for healthcare systems to be overwhelmed will be much reduced. The eventual provision of a vaccine will greatly enhance scope for herd immunity. That should give everyone some solace that another wave of infections will prove less deadly than the first.

The above report is focused on Europe and the Eurozone economy was struggling to growth before the crisis. It is unlikely to lead growth on the way out of this crisis. For that we need to watch both China and the USA.  China was first in so it should logically be first out of the economic contraction. The USA’s cities are much less dense than those of Europe so social distancing is easier and the nation’s technology sector increasingly turning towards solutions. 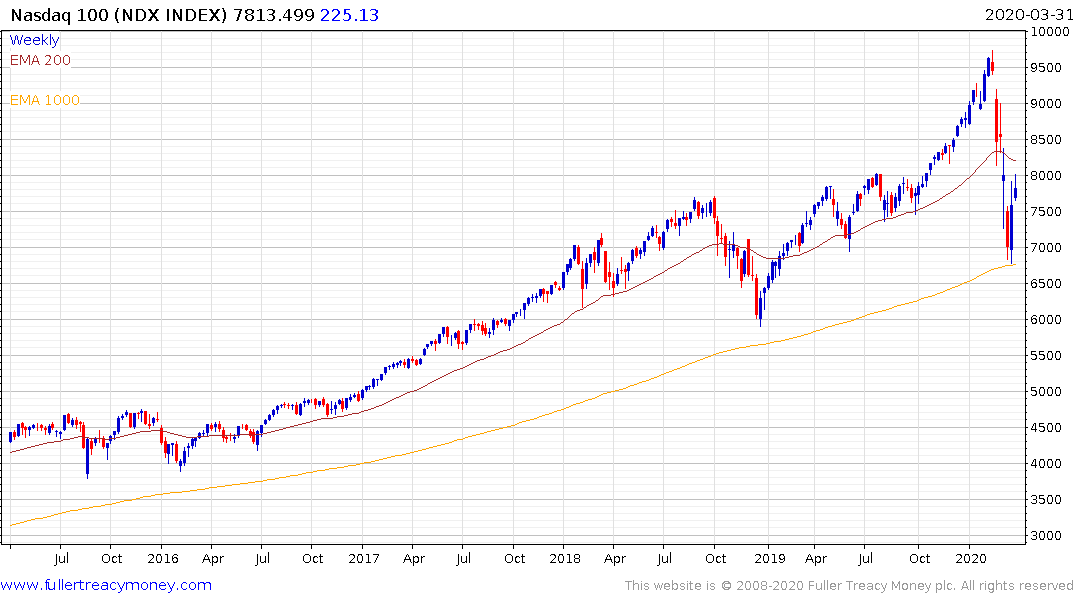 We are still likely to see a great deal of back and forth trading and it is yet to be seen where the first range forms. For the Nasdaq-100 or the Philadelphia Semiconductors Index that could form between the 1000 and 200-day MAs. 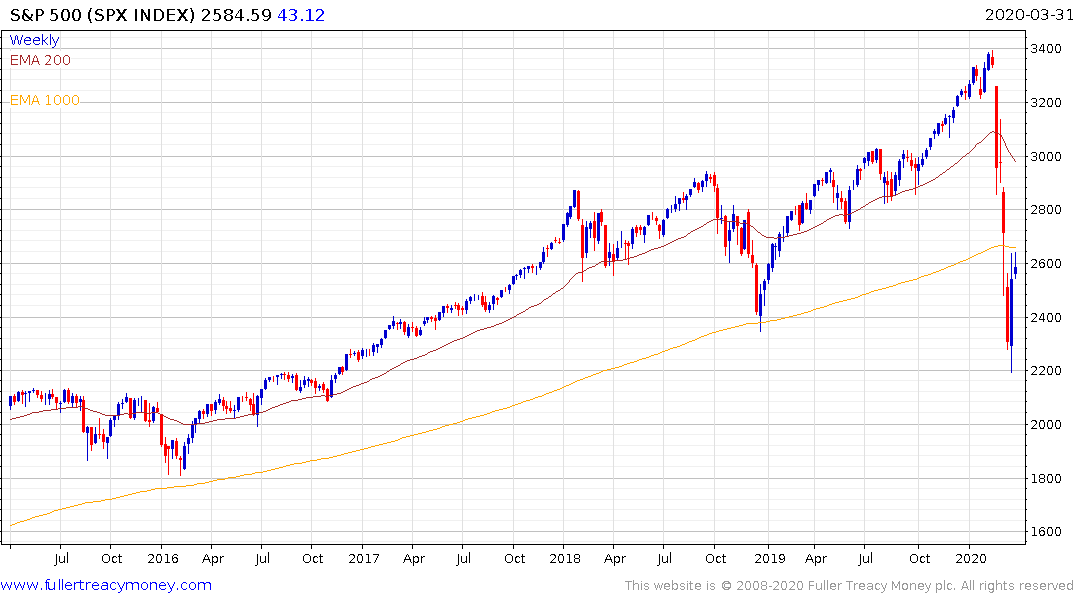 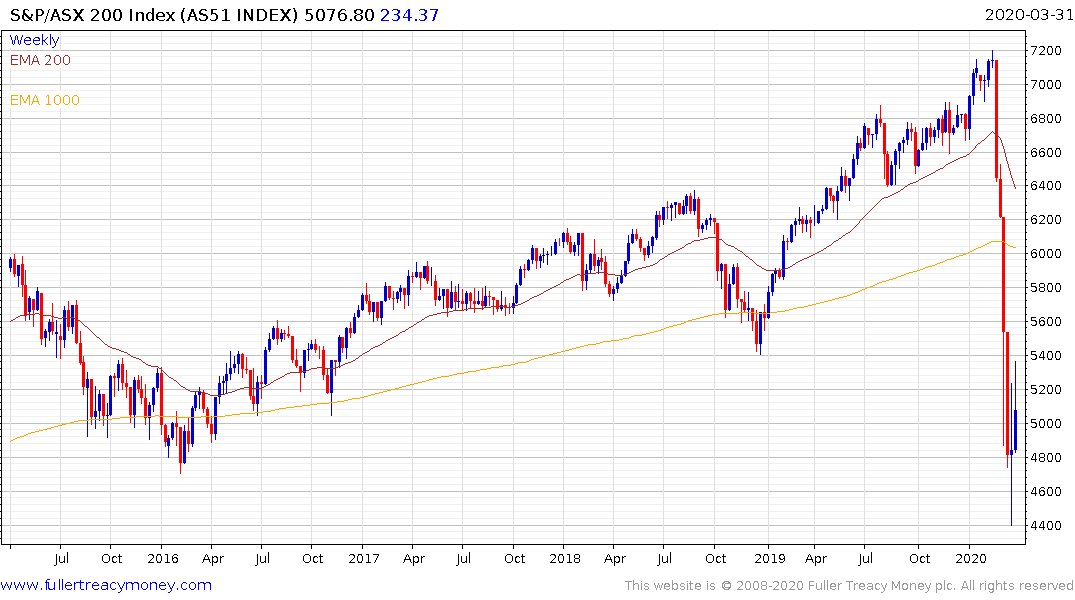 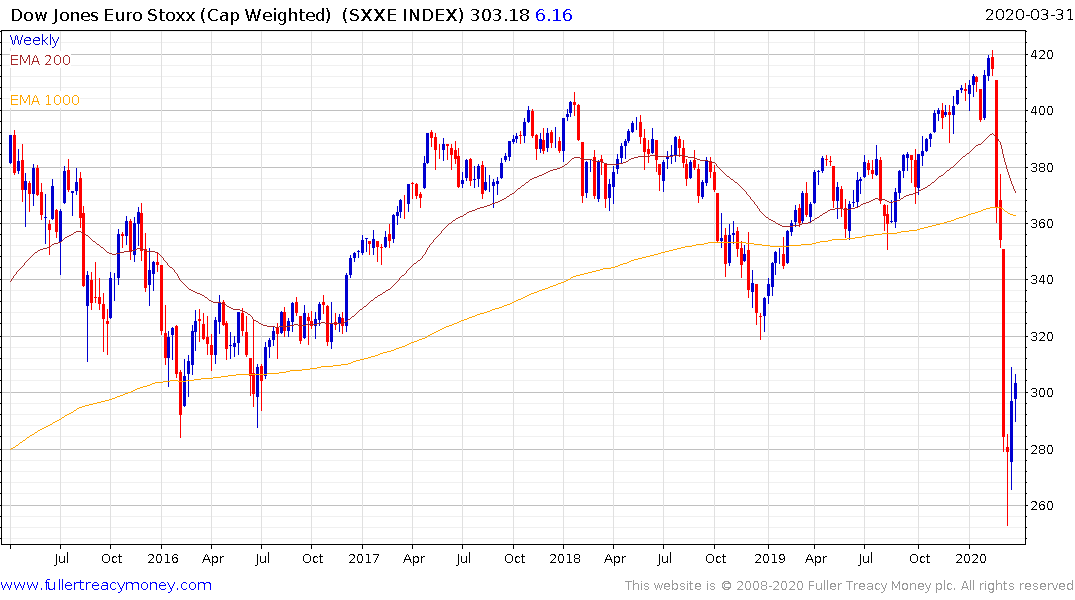 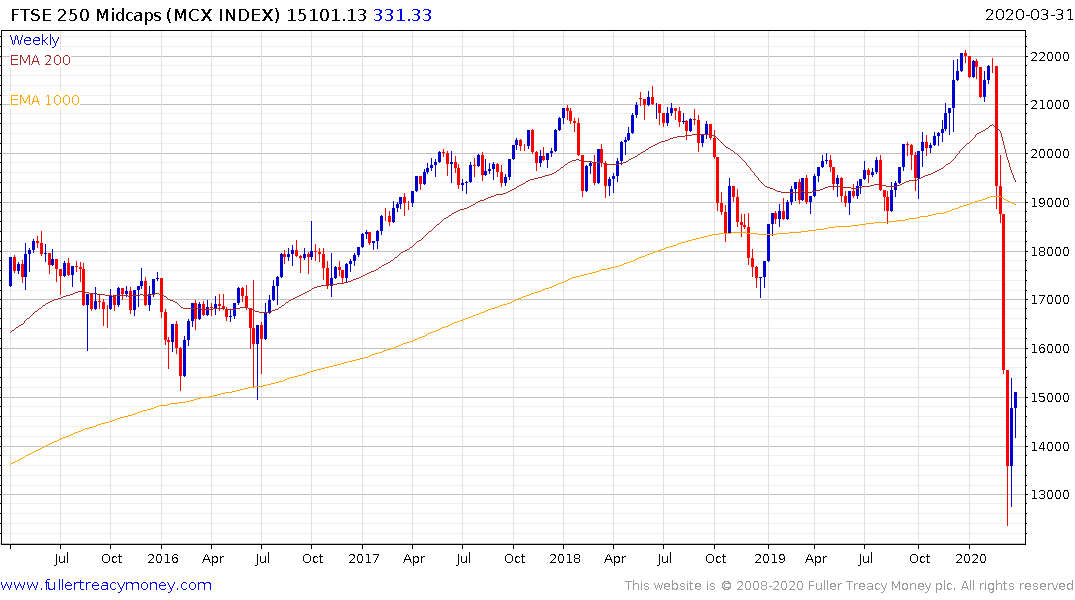 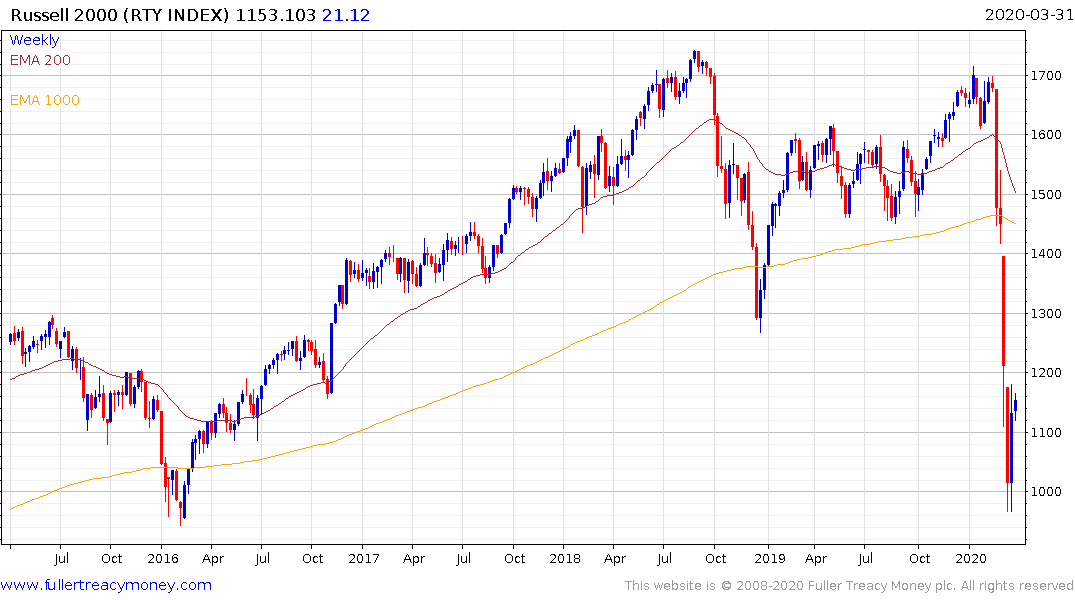 The majority of global indices and particularly banks and midcaps are nowhere in sight of either of these medium or long-term trend means. By definition they have experienced much greater technical deterioration. In order for mega-0cap dominated indices to retain relative strength the weaker portions of the market will need to at least stabilise.