However, the strong reading from the first large-scale trial to post efficacy results bodes well for other experimental vaccines, in particular one being developed by Moderna Inc. that uses similar technology. Its big trial could generate efficacy and safety results in weeks. If that study succeeds as well, there could be two vaccines available in the U.S. by around year-end.

Pfizer expects to get two months of safety follow-up data, a key metric required by U.S. regulators before an emergency authorization is granted, in the third week in November. If those findings raise no problems, Pfizer could apply for an authorization in the U.S. this month. A rolling review is in process in Europe.

Leading the Race
The positive preliminary data mean the U.S. pharma giant and its German partner are on track to be first with a vaccine, after signing advance deals with governments worldwide for hundreds of thousands of doses. The companies have said they should be able to produce 1.3 billion doses -- enough to vaccinate 650 million people -- by the end of 2021. About 50 million doses are expected to be available in 2020.

“It shows that Covid-19 can be controlled,” BioNTech Chief Executive Officer Ugur Sahin said in an interview. “At the end of the day, it’s really a victory of science.”

This news is the foundation of the argument for removing social distancing guidelines by the end of the second quarter at the latest.

It no longer matters whether one agrees with wearing a mask, practising social distancing, vacating offices, opening or closing schools or the potential for overloading the healthcare system. The question of whether this was necessary or not is now irrelevant. The introduction of vaccines will render the argument mute.

It doesn’t even matter if the vaccines are safe or how much difficulty there is in transporting them at extremely low temperatures. The whole argument that vaccines are the solution is they give politicians cover needed to walk back social distancing guidelines. The timing of the announcement, a week after the US election does beg the question of whether it is politically motivated.

The challenge for investors is the question of how all the additional debt may act as a drag on future growth potential is now more relevant than ever.

This report from JPMorgan estimates returns over the coming decade takes that concern as a central argument. 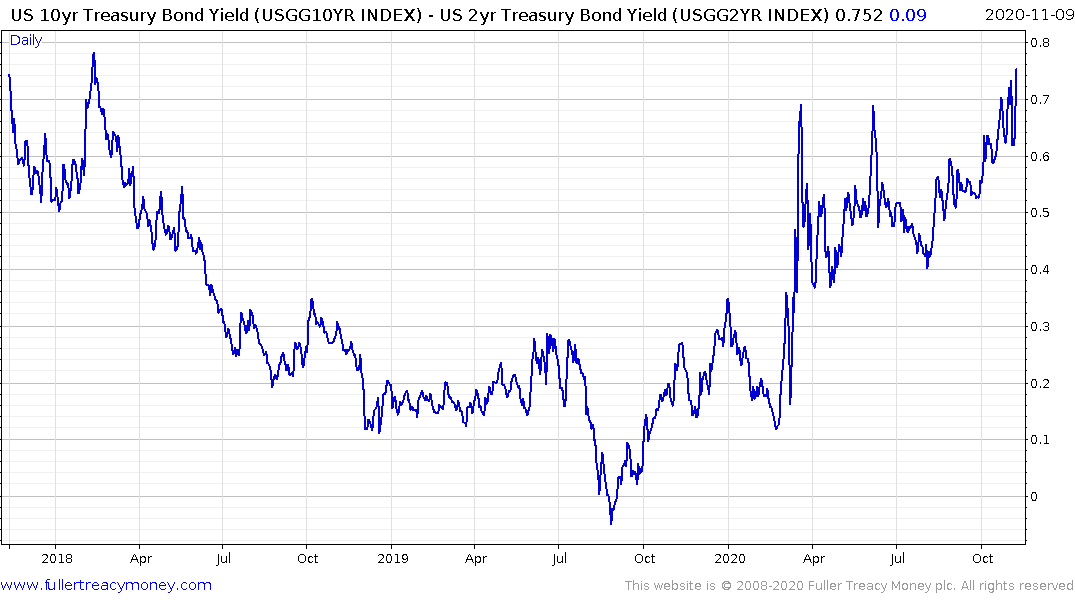 The yield curve spread surged through 70 basis points today. That suggests upward pressure on government borrowing costs. The Fed has clearly stated they want the US government to issue more debt so they can buy it. Rising yields introduce urgency into the Fed’s plans for additional bond purchases. 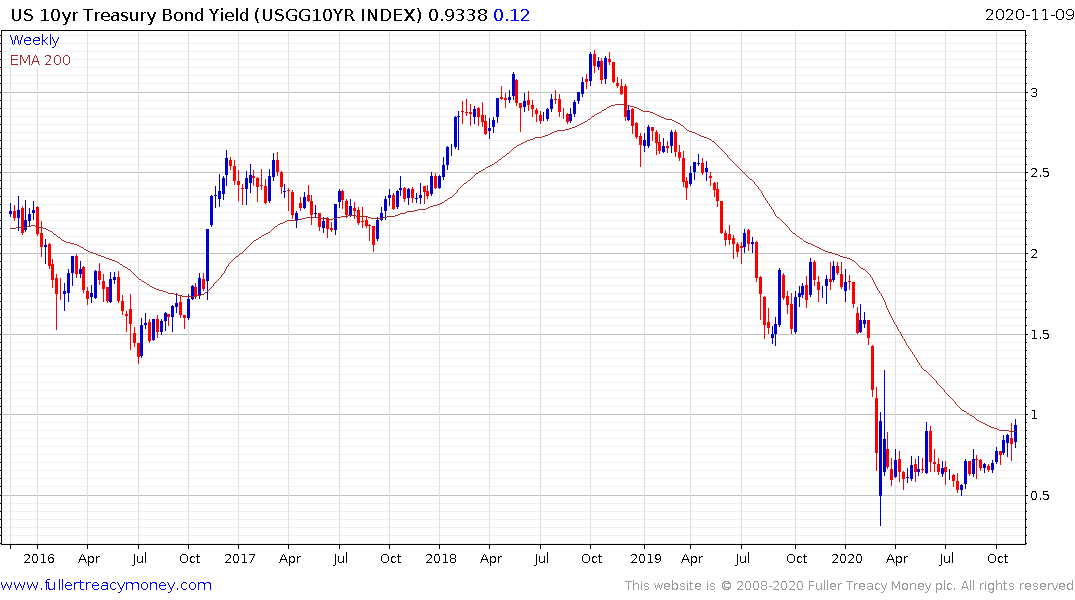 10-year yields are back testing the psychological 1% level and another clear downward dynamic will be required to check the advance. 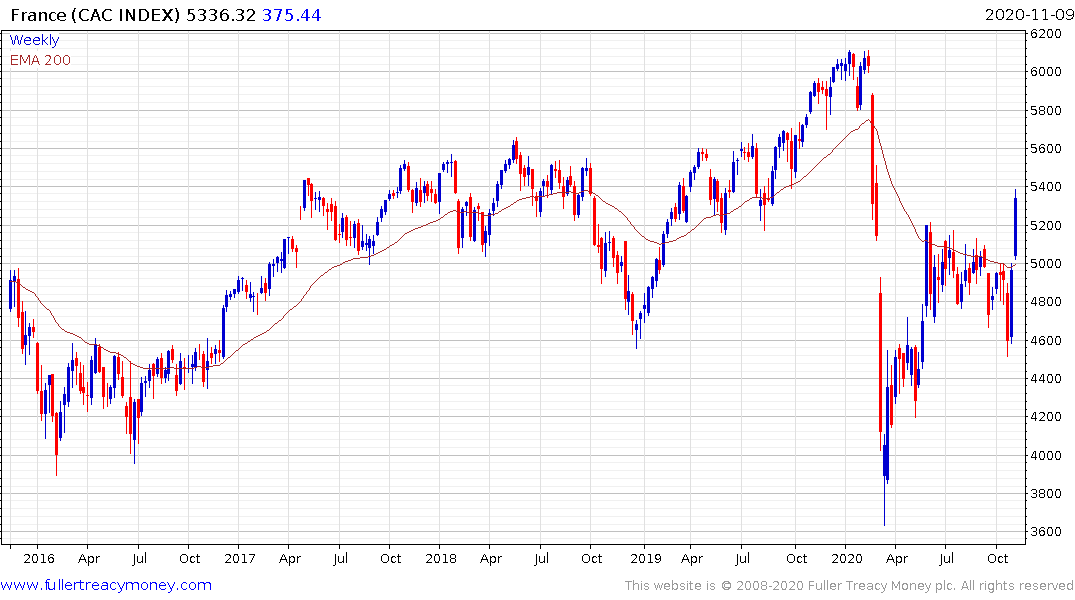 The rotation out from stay-at-home and into recovery candidates received a significant boost today. European markets in particular rebounded since they have been most acutely affected by lockdowns. 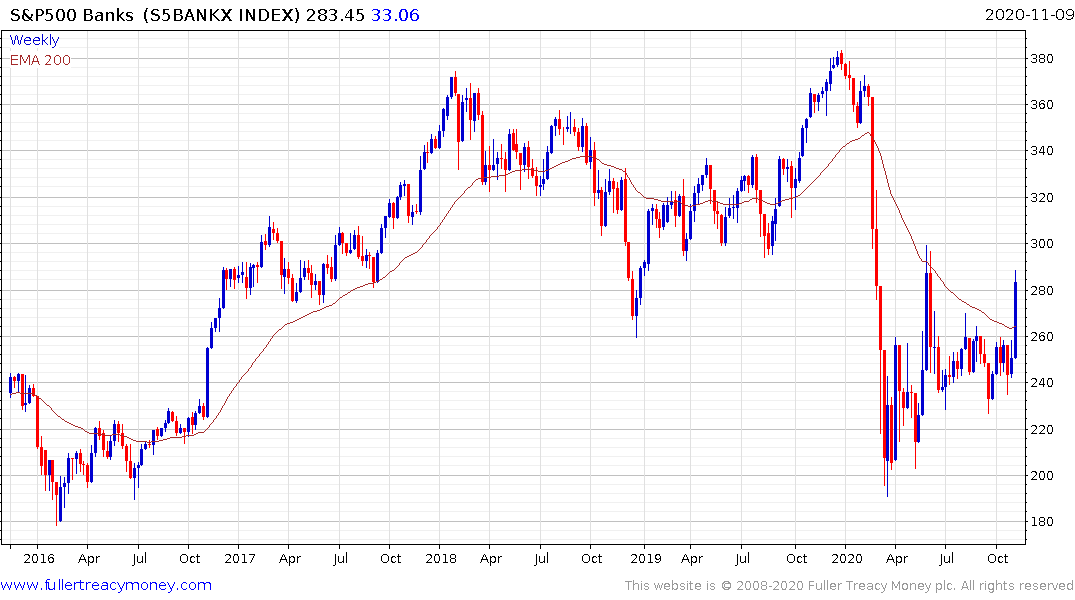 Banks jumped highter on the outlook for higher margins as the yield curve steepens. Nevertheless, the reliance of the market on liquidity has not diminished. If anything, it has become even more dependent on the outlook for additional stimulus because companies and consumers still need assistance with millions of people still out of work. 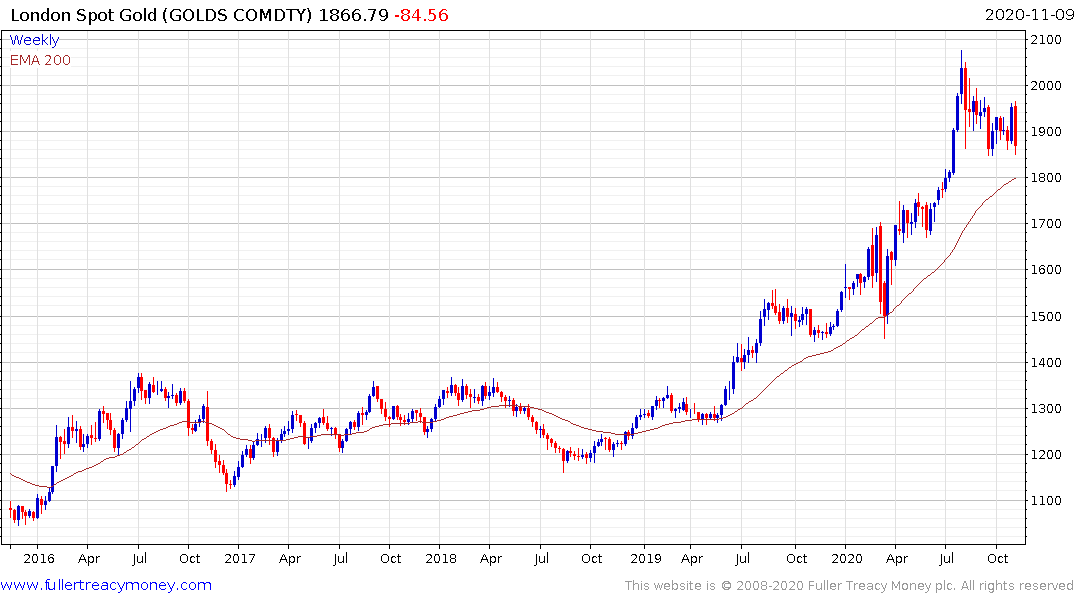 Gold pulled back sharply today to test the lower side of the three-month range. This the second time in as many months that the upside has been capped. It suggests we may need to wait a while longer for a return to medium-term demand dominance.