Musings From The Oil Patch May 5th 2020 by Eoin Treacy

These large stock buybacks, coupled with increased debt, despite low interest rates, have contributed to a remarkable decline in corporate cash balances.  Cash balances for S&P 500 Index companies have fallen to the lowest level since 1980, while debt has soared.  Based on how volatile these two measures have become, we wonder whether, following the recession we certainly are in, cash on company balance sheets becomes a prized asset.  Likewise, will debt become toxic?  Given very low interest rates, something not likely to change anytime soon, will corporate executives adjust how they manage their balance sheets?

Traditionally, dividends account for about 2% and share buybacks about 3% of the historical annual average stock market return of 5%.  The cessation of share buybacks would cut investor return expectations more than in half, and returns will be further reduced to the extent that dividends are eliminated and/or restricted.  That will be a huge blow to investors who sought out stock market returns to replace those lost from bonds due to low interest rates.  The neighboring chart shows that about 6% of buyback programs, representing 14% of the expected value of buybacks for energy, have been suspended so far this year.  We certainly expect these numbers to rise as the year unfolds, regardless of legal restrictions imposed by government relief payments, due to cash-preservation steps by managements following the oil price collapse.

As Exhibit 17 shows, energy in the S&P 500 Index was the fourth lowest sector, ranked by dollars committed to share buybacks.  Not a surprise, given the oil price crash of 2014, was the sharp decline in dollars spent on share buybacks over the last five years compared to the last 10 years.  The amount of money spent on energy share buybacks for 2015-2019 was only 31% of the 10-year expenditures.  We will not be surprised to see the next 5-year period having even less money spent on stock buybacks, unless there is a miracle recovery in oil prices.

If we consider what investor returns by sector of the S&P 500 were in the fourth quarter of 2019, energy topped the list with nearly a 10.5% yield.  That was nearly 80% greater than the yield of the S&P 500 Index.  That will change in 2020, and likely in 2021, as we expect that is how long it will take for the oil market to balance.  The unanswered question is how the risk profile for investing in energy stocks may change, as well as investing in the stock market overall?

Royal Dutch Shell cuts its dividend last week which was a significant departure from its long-held policy of reliable payouts. However, the move was anticipated by the significant decline in the share over the last few months and the decision did have had a measure effect on the price. The primary reason investors look at the energy sector now is because of the attractive valuations. Meanwhile, the uncertain outlook for the oil price is the reason valuations have improved. 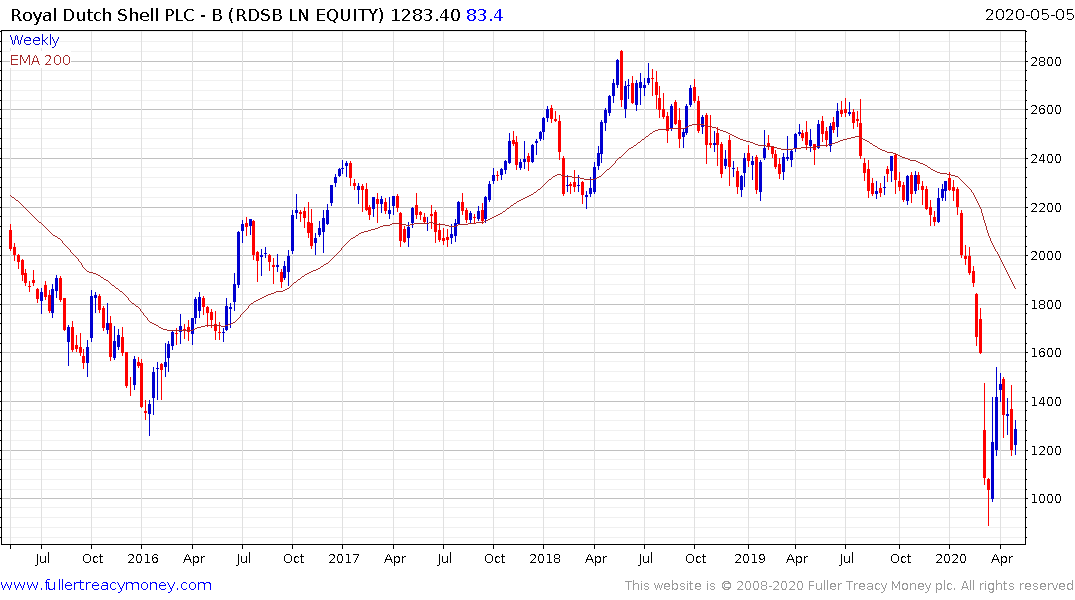 The forced liquidation of almost a quarter of all open interest in the West Texas Intermediate market, with the US Oil Fund’s roll signalled the bottom in the oil market. From here on out, $10 is likely to be a floor. It will be difficult justify an argument that the price should rally very much beyond $50 considering how much excess supply is available to bring to market but there is a lot of leeway for trading in that $40 window. 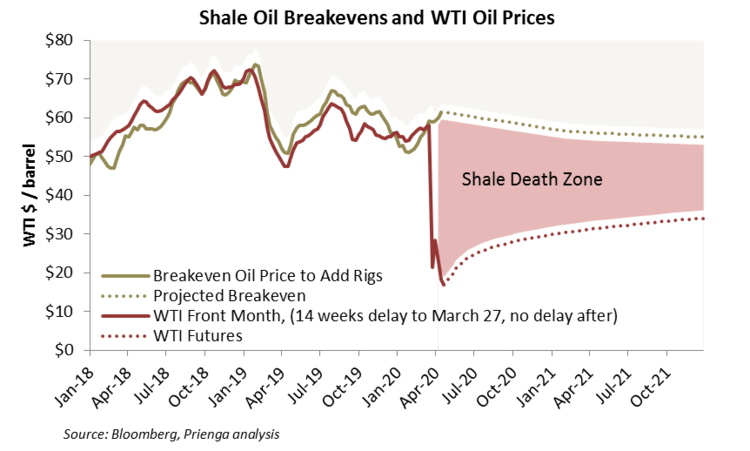 Shale producers need $60 to justify spending on new drilling. Without new drilling US domestic supply will contract. That’s the primary idiosyncrasy of shale production. Supply is much more elastic than for conventional wells. 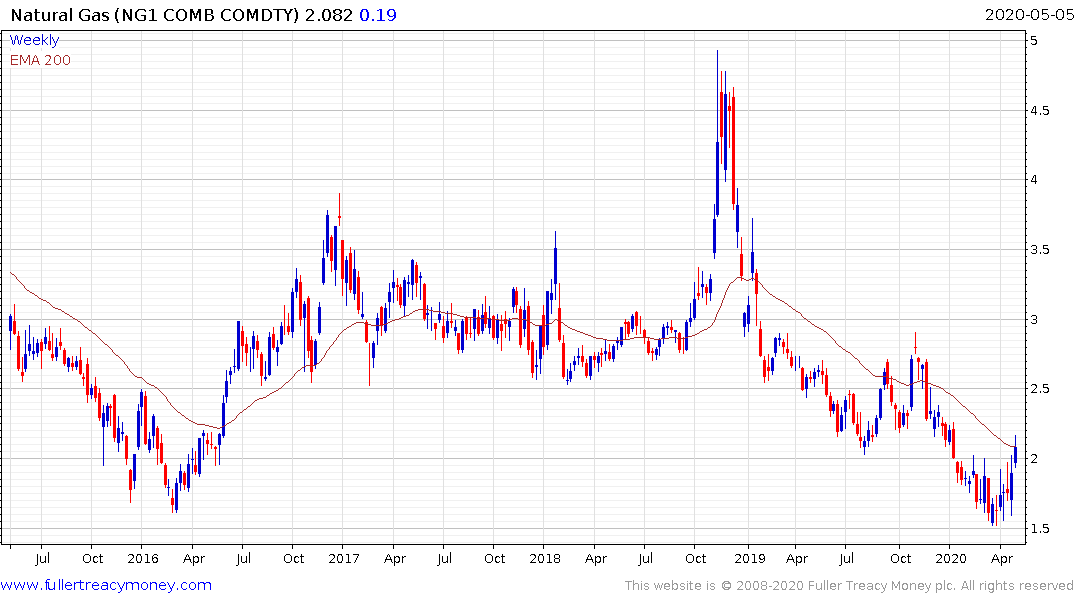 Natural gas is the primary beneficiary because it is a significant by-product shale production. The price broke out to out of a three-month base today to challenge the region of the trend mean. A downward dynamic and sustained close below $2 would now be required to question potential for additional upside. 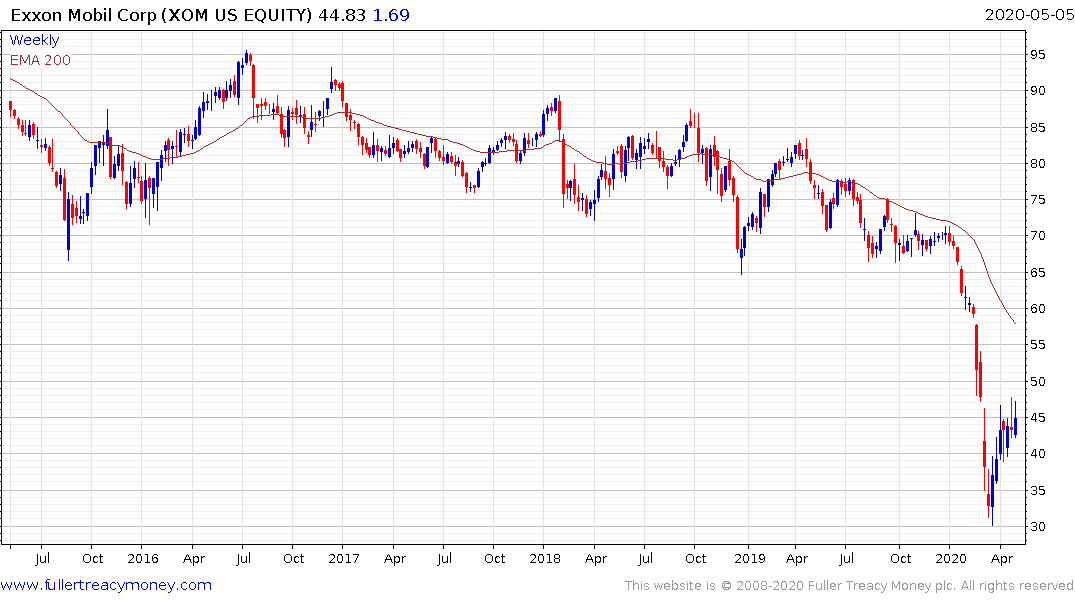 Exxon Mobil has never cut its dividend and currently yields 7.6% but it is unlikely to recover quickly because of the uncertainty about future oil demand. The two big uncertainties as we look at the end of the lockdown phase is how many businesses will reopen and what level consumer activity will stabilise at.