Musings from the Oil Patch May 15th 2018 by Eoin Treacy

Internationally, the old conventional view suggested that the U.S. would have to be actively involved in the Middle East, as well as most other well-developed oil and gas basins around the world.  The U.S. would be competing against other countries – especially in Europe and Asia – for new supplies of oil and gas, which would lift prices higher.  This vision projected the U.S. being actively involved in every territorial dispute in the Middle East and having to expand its naval power to patrol and protect international shipping routes from potential disruptions, which would bring economies to their knees.  That vision was reminiscent of what had transpired during the 1970s, as OPEC gained control over global oil pricing and used its newly-found oil weapon for geopolitical gains.

Today, geopolitical scholars and analysts wonder whether the diminishing needs for Middle East oil are making the U.S. less willing to become involved in the region’s battles.  The concern over whether the U.S. will be actively working to prevent the outbreak of war in the Middle East has forced countries and their leaders to consider finding other political partners for support.  Those leaders have also had to consider the impact reduced U.S. oil purchases may mean to the availability of petrodollars, an important ingredient in commercial trade and military expenditures.

The changing global role of the U.S. is also having an impact in Europe where the continent’s dependence on Russian natural gas supplies may be challenged by the emergence of the U.S. LNG business.  Cheap and dependable gas supplies from the U.S. may make European leaders more willing to agree to U.S. demands for increased military expenditures, as those leaders consider their experiences having been held hostage to Russian geopolitical desires via its manipulation of natural gas supplies in the past.  The world of international politics is rapidly being upended by the growing volumes of U.S. oil and natural gas.

If the USA’s increasingly powerful position as a swing producer of oil and gas is reducing the need for it to play the part of the global police force then what can we conclude from China launching its first domestically produced aircraft carrier this week?

After all China is nowhere near meeting its surging demand for energy from domestic supplies. Therefore, it may feel that it needs a blue water navy in order to secure the supply lanes for the commodities it has secured through various agreements particularly in Africa, Latin America and the Middle East.

China has some of the largest inground reserves of shale gas in the world, but they are concentrated in mountainous areas in the south west which are already prone to earthquakes. The difficulty in getting those resources out of the ground is likely to act as an additional impetus to pioneer electric vehicles as a solution to the country’s energy dependency. That is also a handy pretext for expanding one’s military presence internationally. 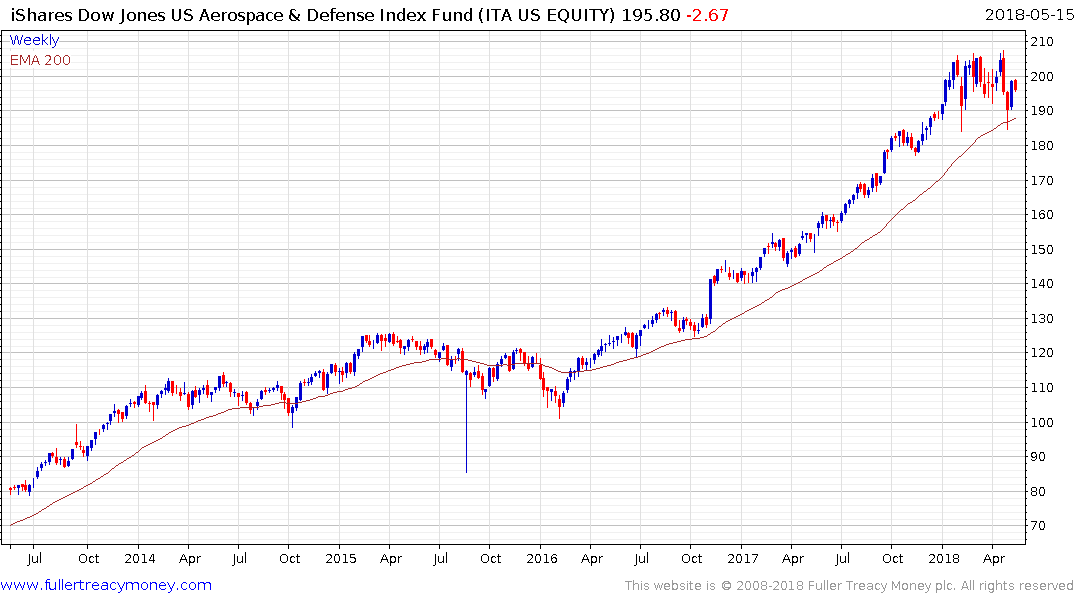 The iShares Aerospace and Defense ETF lost momentum in January following a particularly consistent trend in 2017 and has now bounced from the $190 area twice which also now coincides with the region of the trend mean. Boeing is a big part of the reason behind the fund’s loss of momentum.