Musings from the Oil Patch June 26th 2018 by Eoin Treacy

To appreciate how the energy world is changing, two charts presented by Mr. Dale set the stage.  Global energy growth last year was 2.2%, up from 1.2% in 2016, and above the 10-year average of 1.7%.  That robust growth came as a result of strong global economic growth, but also due to a decline in energy productivity.  While the International Monetary Fund is warning of potential dark clouds on the horizon for global economic growth, its forecast remains robust, meaning energy growth is likely to remain high.

Also important is the difference in where energy growth originated.  The driver for the above-average growth was the strength of the developed economies of the OECD, but also some deterioration in energy productivity.  However, nearly 80% of the total energy growth came from the non-OECD or developing economies of the world.  That is not surprising as they benefit from the global economic recovery, especially China.  China saw energy demand grow by 3%, nearly three times its growth rate of the past several years.  That higher growth was driven by recoveries in numerous high-energy sectors such as iron, crude steel and non-ferrous minerals.  Still, the high growth rate was well below China’s 10-year average rate, even though it was helped by a decline in energy intensity that was more than twice that of the global economy.

The picture of primary energy fuel mix highlighted the title of Mr. Dale’s remarks – Two Steps Forward and One Step Back.  He pointed to the dramatic growth in natural gas and renewables as the two steps forward.  Combined, those two fuels accounted for 60% of the total growth in energy fuels.

The backward step was the growth in coal usage.  In 2017, global coal use rose by 1.0%, or 25 million tons of oil-equivalent, marking the first annual increase since 2012.  The increase was driven by India, although China’s consumption also rose after declines in the three prior years.

Batteries might eventually remove the need for quite so much back up conventional power generating capacity as renewable penetration of the energy market continues, but that is still some ways off. At present natural gas represents the happy medium between reliance on coal and the fact that renewables are not yet ready to stand on their own. 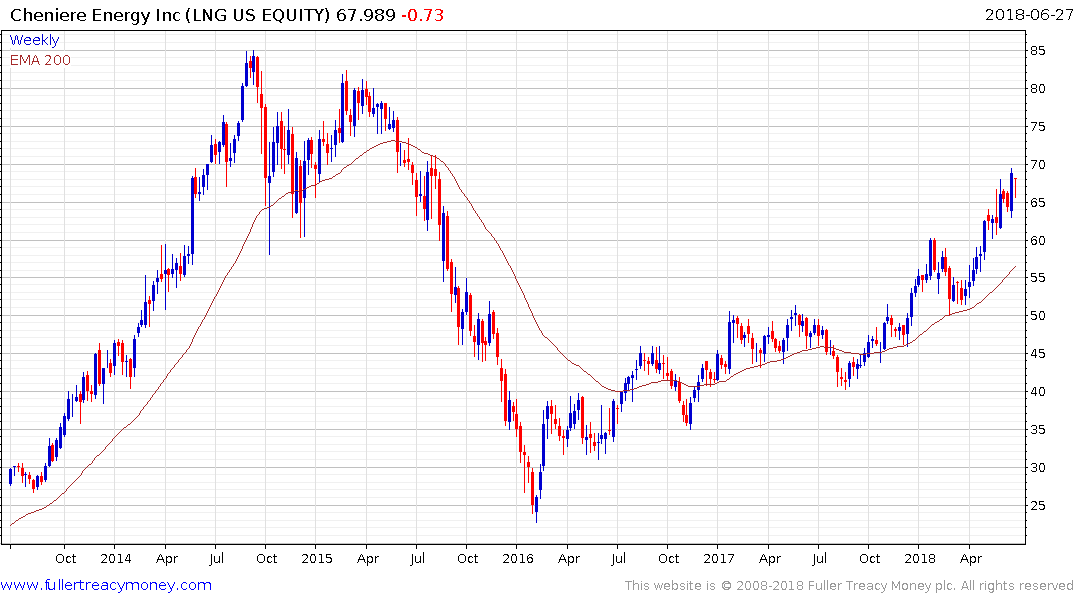 Cheniere Energy which owns one of the USA’s only LNG export facilities collapsed in 2015 from its peak but has been recovering consistently since as LNG demand continues to rise. While somewhat overextended relative to the trend mean at present, a sustained move below it would be required to question the medium-term upward bias. 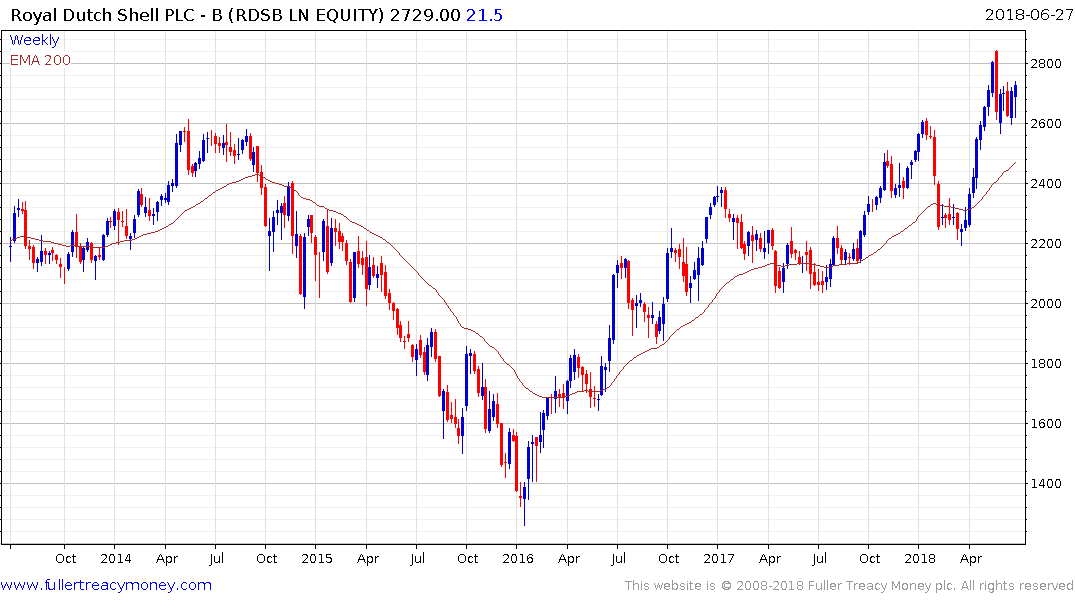 Royal Dutch Shell’s reaction has so far been limited to a consolidation above the previous peak. A sustained move below the trend mean would be required to question medium-term scope for continued upside. 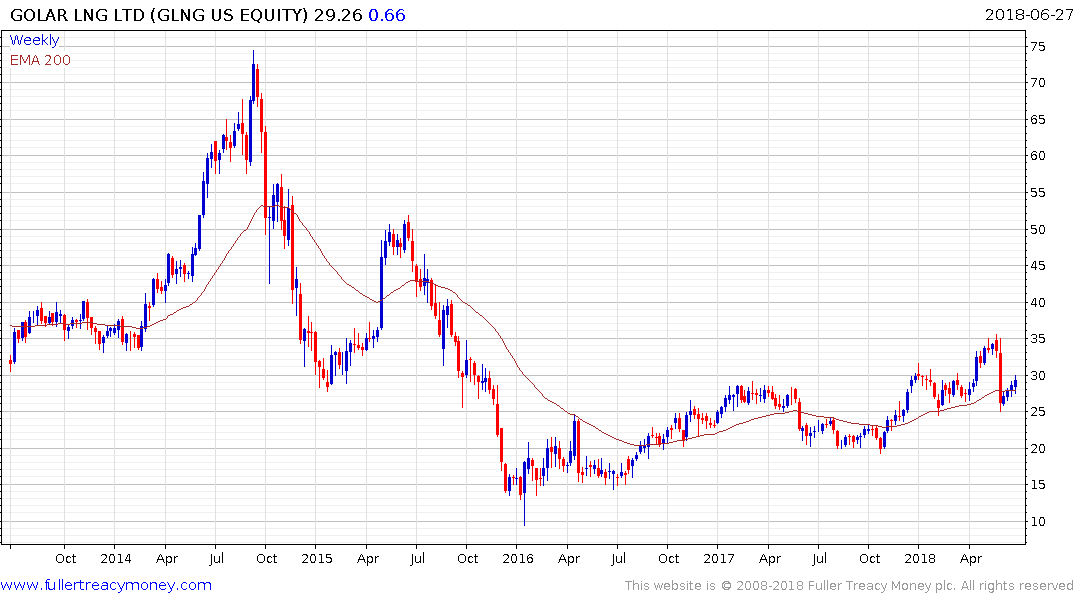 Golar LNG accelerated to its early 2016 low and has held a progression of higher major reaction lows since. 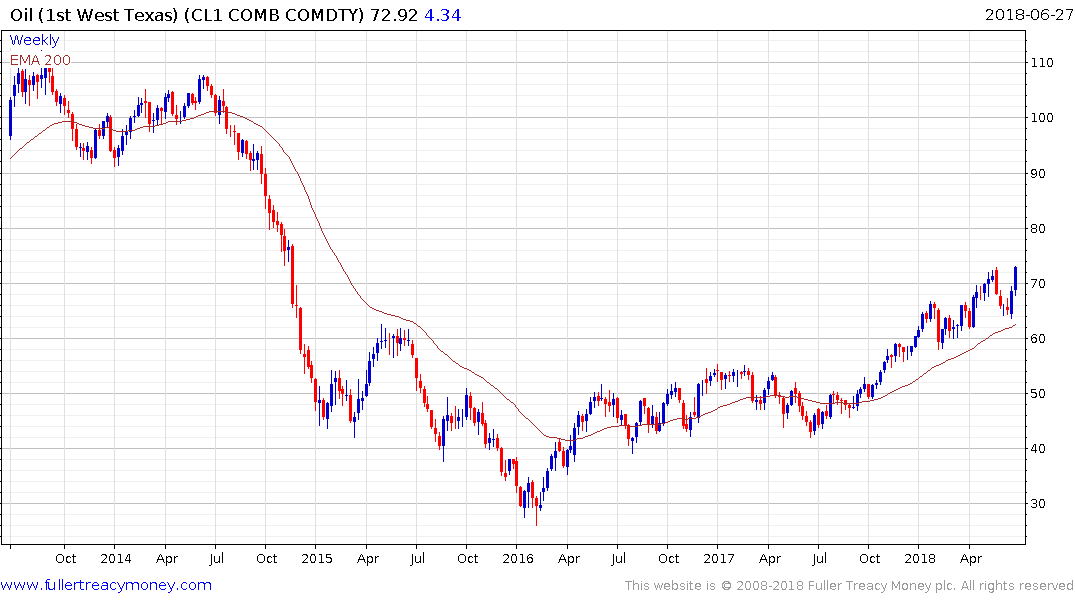 Meanwhile West Texas Intermediate Crude Oil has been resurgent and moved to a new recovery high today on lower US stockpiles.