Musings from the Oil Patch January 23rd 2017 by Eoin Treacy

Looking at these two events from a 30,000-foot perspective, one sees a leading oil trader shutting down literally just after the bottom in oil prices was set in 2016, and now an influential and successful oil industry player, who helped shape industry trends for decades, is throwing in the towel on trading energy equities.  Based on the history of the stock market, market bottoms, whether for the overall market or specific stock sectors, are generally marked by a high level of disinterest among investors (often reflected in low weightings in the market sector), long-term bullish investors capitulating and selling their shares, while expressing the opinion that “this market is different, and not likely to improve anytime soon.”

A common refrain among institutional investors currently shunning energy investments, is that they have been burned by the predictions of recoveries that turned out to be wrong.  Since energy’s weighting in the S&P 500 index is so small, they plan to overcome any outperformance by placing bigger bets on the outperforming information technology sector, the top performing sector in 2017.  Who can argue with investing in the FANG (Facebook, Amazon, Netflix and Google) stocks, given their industry dominance and favorable outlooks?  The question is whether their valuations excessively reward their future earnings prospects?

Brent Crude oil has not pulled back by more than $5 since June and continues to trend higher in a reasonably consistent staircase step sequence uptrend. Consistent trends are usually the easiest to analyse, so we can say with confidence that a reaction of more than $5 would be required to question the consistency of the advance. 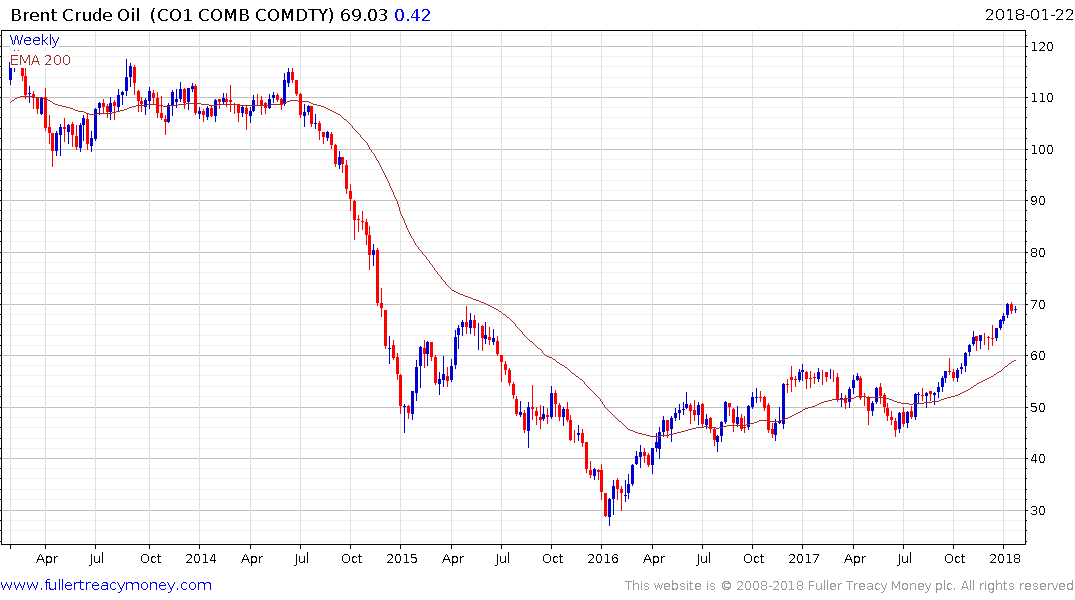 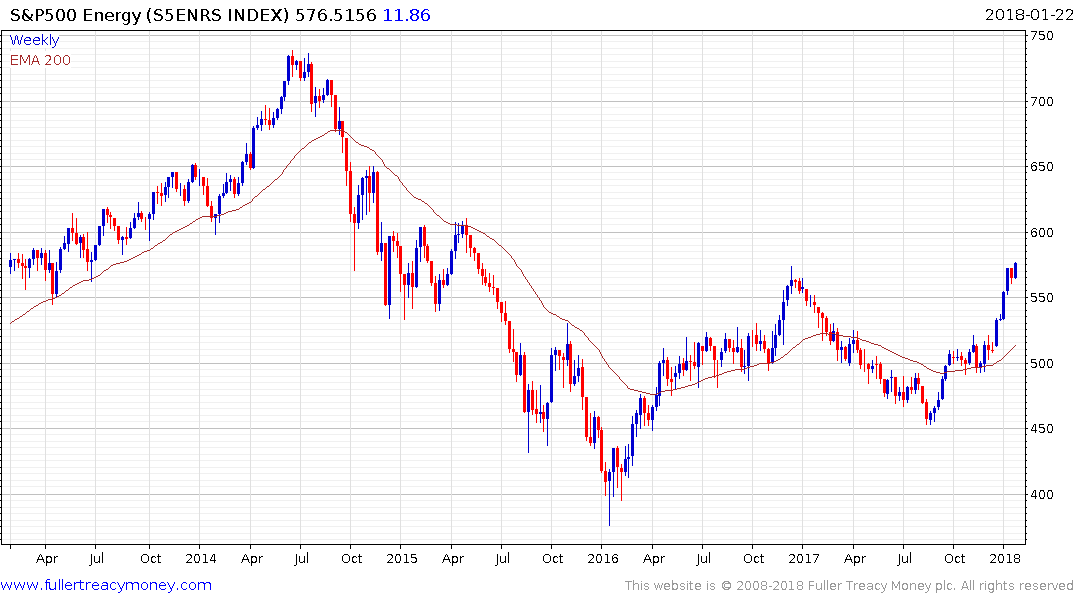 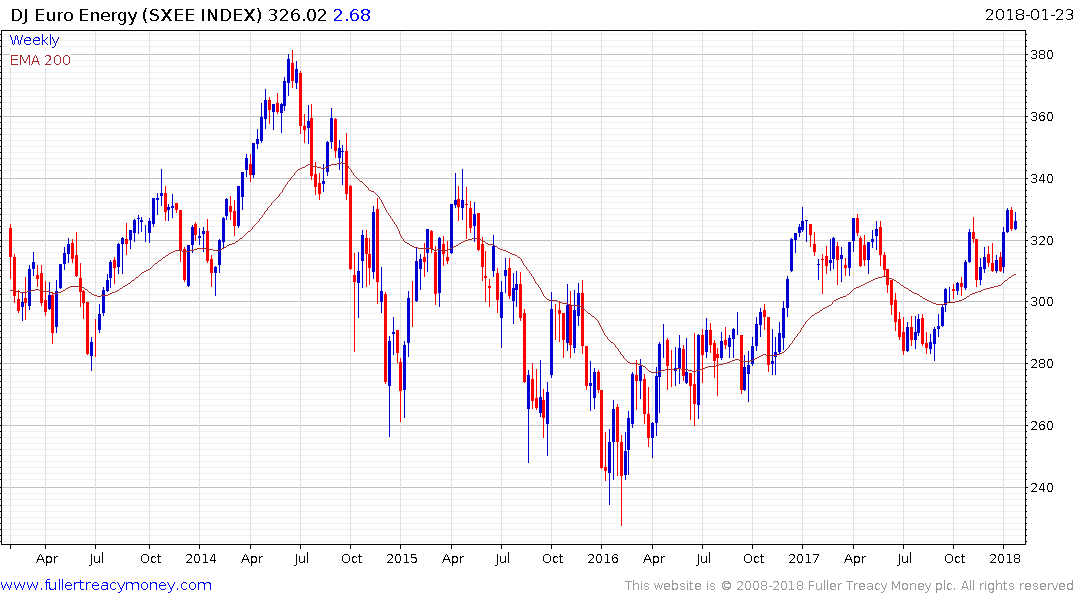 Meanwhile, the S&P500 Energy Index and the Dow Jones Euro Stoxx Energy Index are both lagging returns in the oil price. That suggests the majority of people do not yet believe higher prices are sustainable. This additional commentary from a subscriber adds some colour to US energy supply outlook:

I thought I'd give a brief update from the real oil fields (not the ones imagined by CNBC commentators, analysts, anti-oil people, etc.):

A drilling rig southeast of Oklahoma City, OK had a blowout - 5 crew missing and presumed dead, 17 crew safe with 1 treated for burns. Pictures show that the rig's pipe stand was full, indicating that it was out of the hole when the blowout occurred. No matter how much time passes since my days on drilling rigs, these events always move me. I think few professions have the kind of forever-grip.

Unit Drilling (UNT US) continues to perform well. The chart speaks for itself. 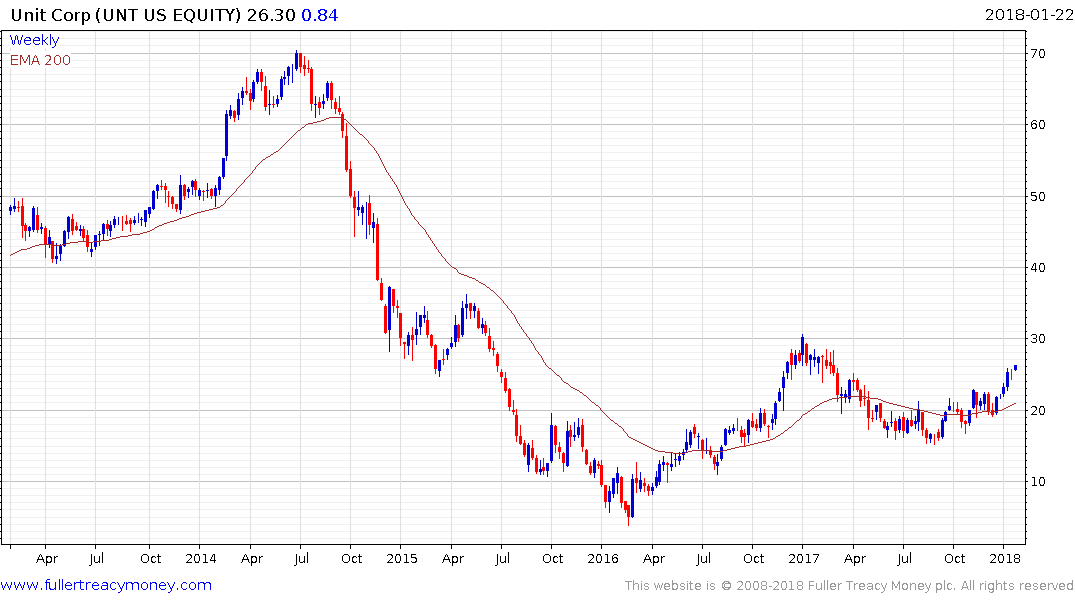 Based on recent conversations with folks actually working in the oil fields, I'd say that we are still a fairly far distance from the overinvestment phase of the recovery. WTI at 64.45 and Brent at 69.92 this morning represents a new breakout after a very brief consolidation, which may encourage more drilling contracts to get signed. In the slightly longer term, as we have discussed, a substantial amount of new supply can be brought online quickly as the number of DUCs [Ed. Drilled-but-Uncompleted] remain fairly high. I think of DUCs as cash flow ready to be turned on. This should limit price growth at some point. Of course, some major national producers are seeing depletion and governmental stupidity taking a bite out of production... which is ever so good for US oil and gas producers and the drillers/etc.

Have a great week!

At some stage energy investors will likely return to thinking about producers from an optimistic perspective and the shares then have the potential to play catch up with the oil price. Of course, that will also encourage new supply into the market so higher levels may be difficult to sustain all other factors being equal. 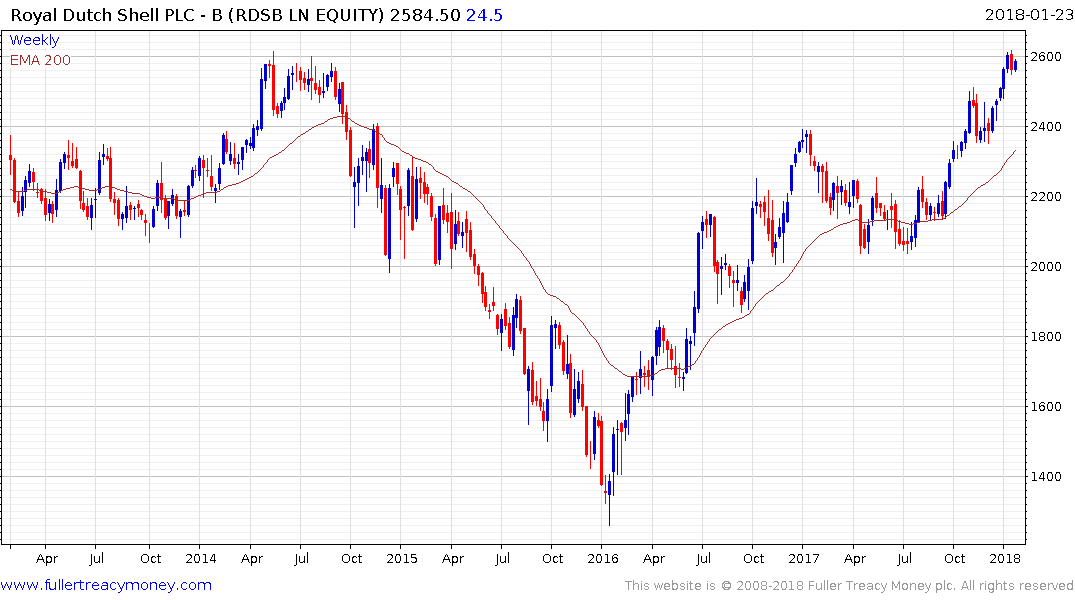 The FTSE-350 Energy sector is dominated by Royal Dutch Shell which is a majority gas producer. The share continues to test the 2014 peak bear 2600p but a sustained move below the trend mean would be required to question medium-term scope for additional upside.