Email of the day on the Australian Dollar by Eoin Treacy

You may have seen this but thought it worth sending as it has potentially big impact for us Aussie’s.

Thank you for this article which I’m sure will be of interest to subscribers. Here is a section:

Wilson, however, says that given Australia's funds have accumulated such a large stock of foreign assets, an aggregate decision of super funds to hedge their exposure will result in flows that will be twice as large as a percentage of GDP.

It is therefore plausible that strengthening in the Australian dollar could trigger a "scramble to hedge" particularly among performance ranking obsessed super funds.

"A discrete increase in hedge ratios by Australian super funds now has the capacity to overwhelm the underlying outflow."

Australia, Wilson says has actually built up a "significant stock of foreign currency exposure" – well in excess of $1 trillion, or the equivalent of or 60 per cent of GDP.

That is because the banks, which borrow heavily from offshore, hedge the currency risk of virtually every dollar they raise, while super funds are prepared to take on more foreign exchange exposure. 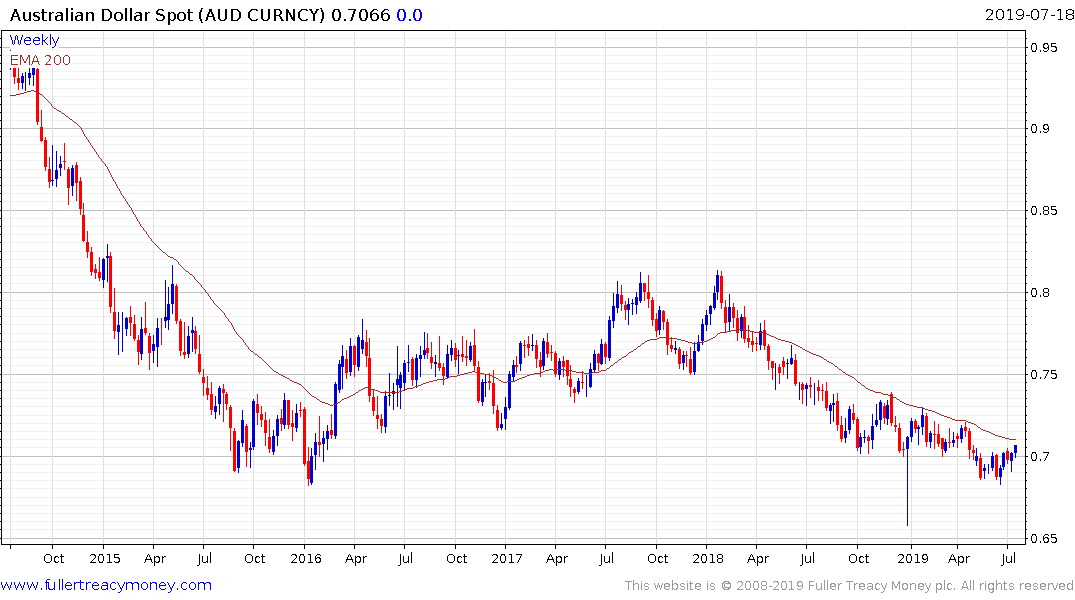 The bulk of the Australian Dollar’s decline occurred between 2011 and 2015. Since then it has been ranging mostly between 70₵ and 80₵.  Such persistent weakness changes investor behaviour. Foreign markets become more attractive in a weak currency market so outward flows build up. At the same time the value of commodity imports increases since they are denominated in Dollars. If that goes on for long enough it will help the current account as detailed above.

The big questions for Australian Dollar bulls are how long will the run-up in iron-ore prices persist? How healthy the LNG market is going to be? And how healthy the domestic economy is.

Iron-ore is rallying because of China’s stimulus which is fueling infrastructure development and the drop in Brazilian supply. It stands to reason that when Brazil’s exports pick back up it will result in the iron-ore price correcting. Exports of iron-ore have grown from about 10 million tonnes in 2000 to more than 70 million over the last several years.

LNG volumes have grown from about 2.5 to 6.5 million tonnes per month since 2015. Meanwhile the price for those exports has been weak. Australia is now a major energy exporter and its proximity to Asia is a significant factor in supply growth bullishness.

Both of these are positive developments but the fiscal and monetary stimulus underway represents a headwind for the Australian Dollar. Considering the reliance of Australia’s exports on global growth it is reasonable to expect that the bullish case for the currency rests on global growth picking back up.

From a technical perspective it is now back testing the region of the trend mean. With commodity prices starting to stabilize other commodity-related currencies are firming and a sustained move above 71₵ would break the 18-month sequence of lower rally highs and signal a return to demand dominance.