The four biggest private-equity firms have raised about $30 billion to invest in energy deals. They don’t all agree on how to spend that money.

Carlyle Group LP is prepared to bet that oil prices have bottomed out and sees now as the best time to deploy its money, co-founder David Rubenstein said last week. Apollo Global Management LLC says the sell-off in oil isn’t over yet and the highest-returning deals are still on the horizon.

“There will be attractive opportunities to buy now,” Rubenstein said March 23 at the SelectUSA Investment Summit in Washington. Greg Beard, who leads energy investing at Apollo, sees a different timeline: “The worst, the problems, are yet to come,” he said in an interview last month.

Private-equity firms are trying to take advantage of crude’s 54 percent plunge since June, which has made targets cheaper. Carlyle, Apollo, Blackstone Group LP and KKR & Co. raised about $30 billion in the past 18 months for energy- related deals.

How and when they spend that money depends on their view on the future direction of oil. Apollo, led by Leon Black, has recently bought debt of companies struggling to meet their repayments because the firm expects oil will remain at multiyear lows, potentially allowing it to take control later. Carlyle has raised billions to acquire companies in leveraged buyouts because it expects oil to start rising, allowing it to sell its holdings at a profit later.

?“Oil prices will come back a bit,” Rubenstein said. “If you can buy now at relatively low prices and hold on for a few years, you’re going to do quite well.”

The speed with which the major private equity firms have been able to raise large pools of capital to invest in the energy sector is a testament to just how much liquidity is still sloshing around the system. There are plenty of opportunities to acquire attractive assets as overleveraged players are squeezed by lower than expected prices for both oil and gas. The fact that private equity has already become so active suggests they will aid in base formation development. However base formation development and recovery are not the same thing. 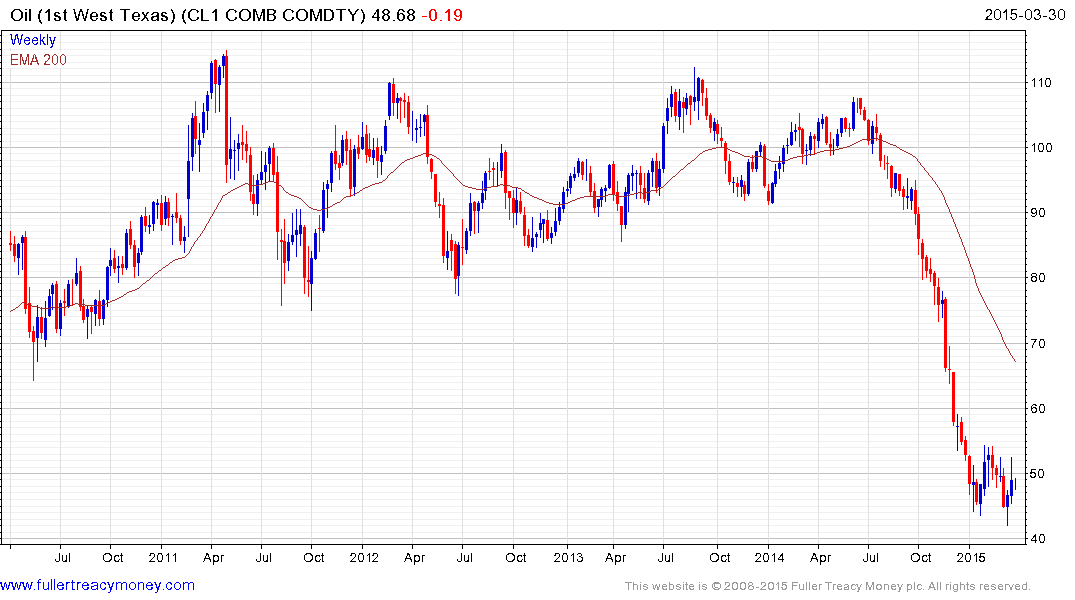 West Texas Intermediate Crude Oil continues to range above the psychological $40 area and natural gas has steadied above $2.50. Breaks in their respective progressions of lower rally highs will be required to signal returns to demand dominance beyond continued scope for short-term ranging.

I searched for bonds issued by US listed energy companies on Bloomberg with ratings of BBB and lower and with prices trading below par. The search returned 236 issues with an average price of 74.95, and coupon of 6.075% and average yield to maturity of 31.41%. Little wonder then that bargain hunters are circling. 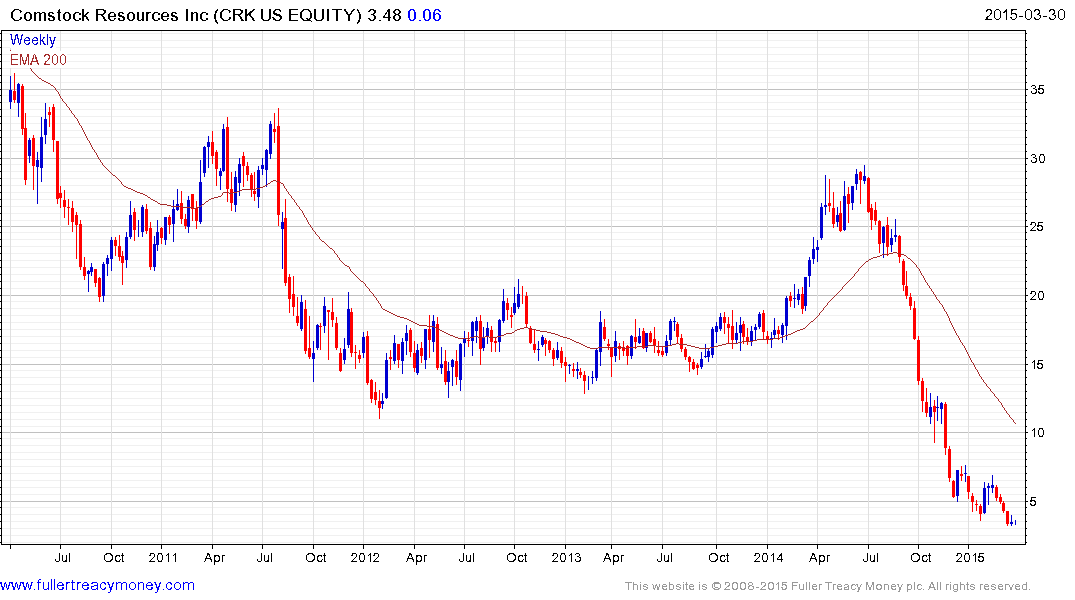 Comstock Resources is an extreme example of one of these issuers. The share has dropped from $30 to less than $4 since July.  It has steadied above $3.20 over the last week and a clear move below that level would be required to signal further deterioration. The company caught my attention because its CCC rated 2019 bond is priced at 41.625 and yields 36.7%.

This note from Moody’s dated February 28th coincided with the company securing an additional line of credit and highlights the challenges it faces. Here is a section:

"With weak commodity prices eroding the company's cash flow and credit metrics, Comstock's proposed secured notes issue will provide the company with critical cash liquidity with which to fund its operations over the 2015-2016 time period," commented Arvinder Saluja, Moody's Vice President. "The deterioration in credit metrics is further exacerbated, however, by the increased interest burden associated with the proposed senior secured notes as well as the absence of any hedging of commodity price risk on the company's production." 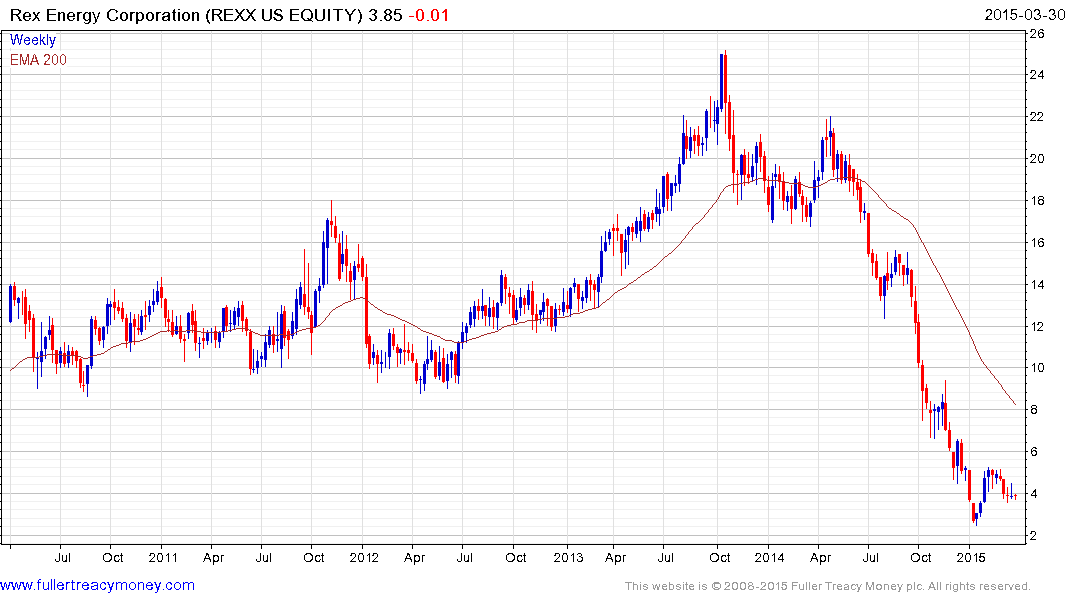 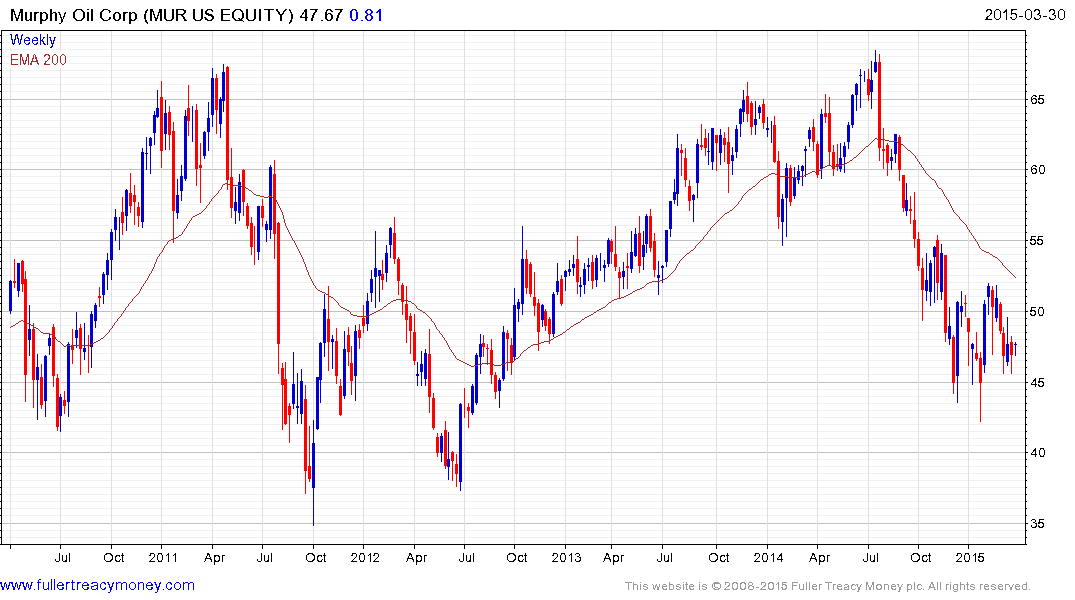 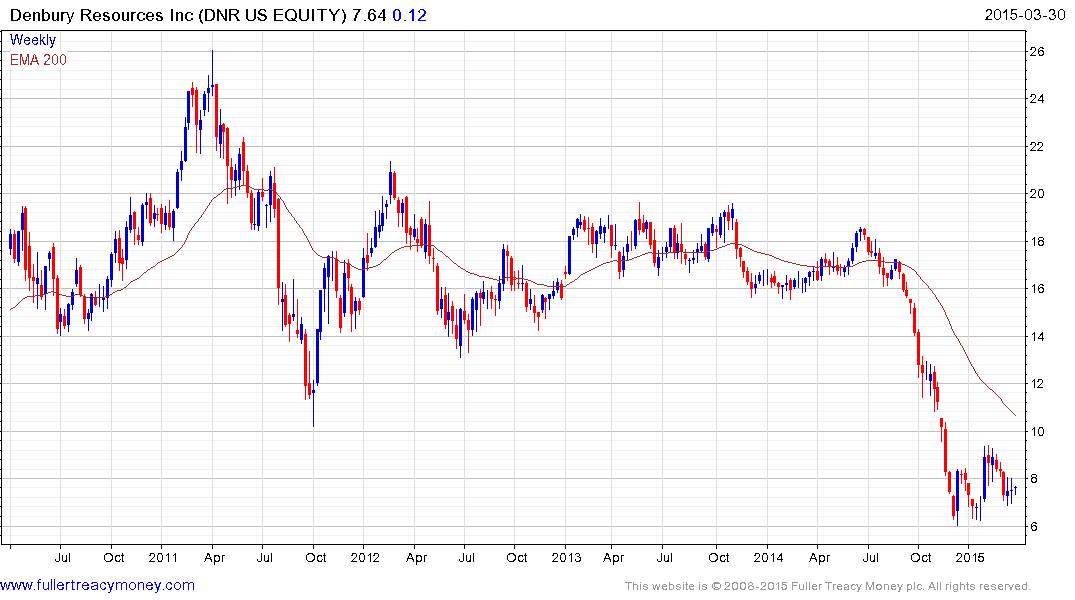 It would be cavalier to expect oil prices to rebound back to last year’s highs in the absence of a major geopolitical event such as a war in Saudi Arabia’s main oil producing region for example. In the absence of such a move the most likely scenario is for oil prices to engage in a potentially lengthy ranging phase.

Bargain hunting in this environment will be dependent on companies surviving the ongoing period of rationalisation but there are likely to be attractive opportunities in both the equity and high yield markets.