Elections in 2019 by Eoin Treacy

I’ve been discussing the rise of populism, for two years, as a revolt against the status quo which is leading to a lurch to the fringes of political opinion. The clarion call for people everywhere demanding change is “What about me?” The only way governments know how to placate disaffected people is to give them more money. That is why we have seen so many countries pursuing fiscal stimulus/deficit spending measures. 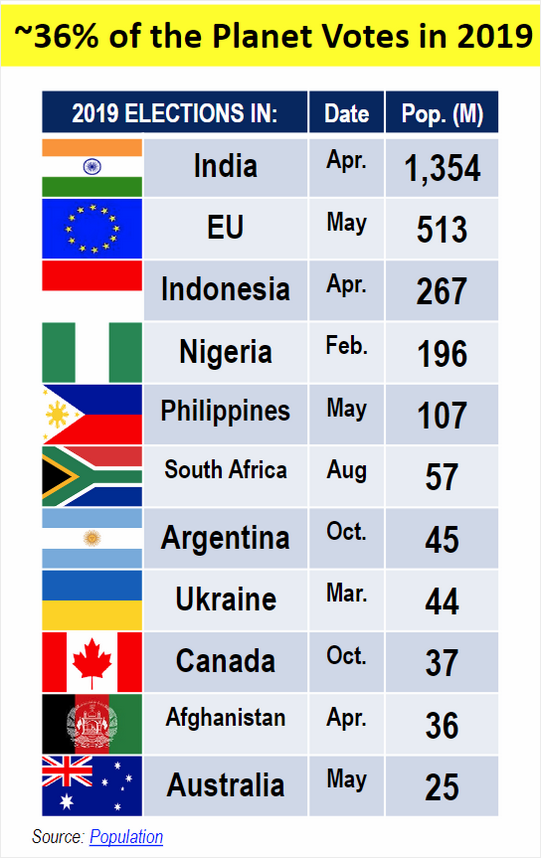 Little attention is being paid at present to the fact adopting procyclical policies is likely to exacerbate peak to trough economic cycles. Afterall, we are almost a decade into an economic expansion and there is ample evidence of inflated asset prices. It stands to reason that by amping up spending now, countries are setting themselves up for a headache when the next economic contraction occurs. 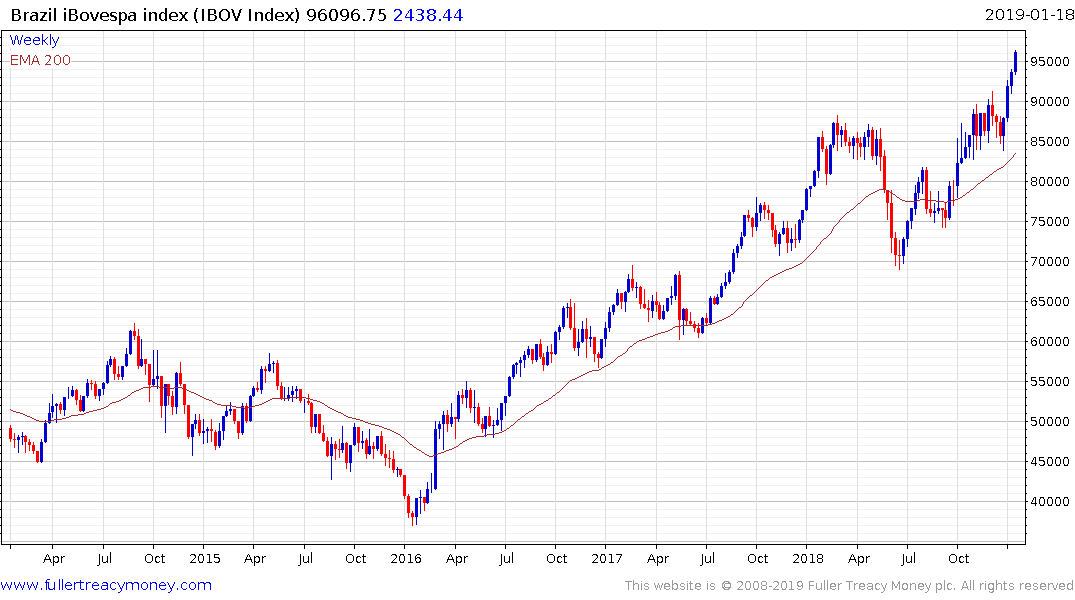 For emerging markets, the big question along with fiscal rectitude is governance. Corruption and poor management represent significant costs for any economy but more so for emerging markets. Brazil for example is still running significant deficits but this is being forgiven by investors because the outlook for improving governance is trumping that concern, at least until we see what in fact Bolsonaro can deliver. 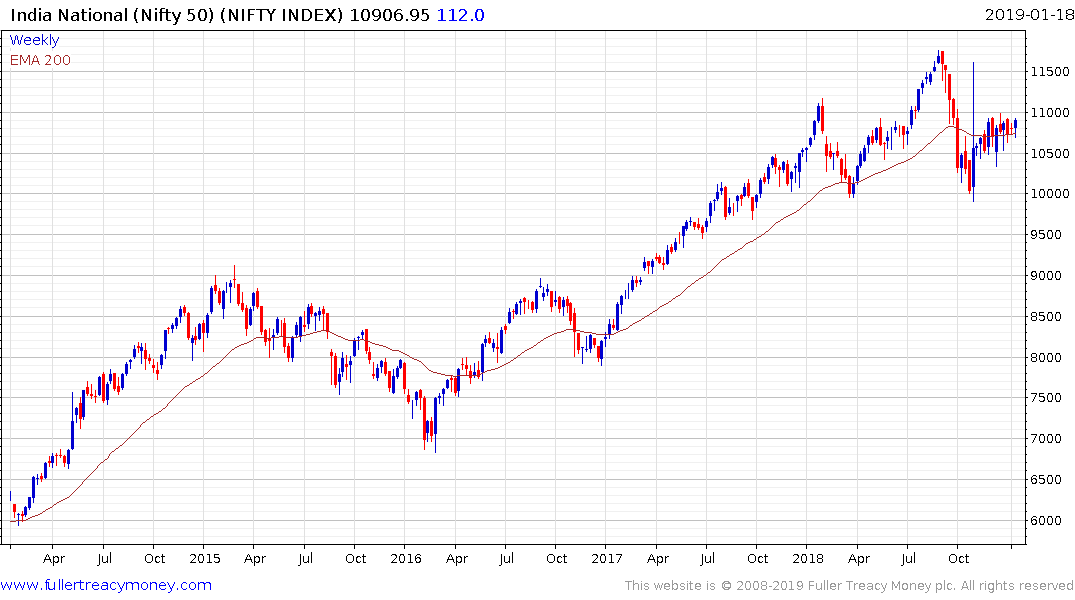 With a new central banker and an election in a few months it is reasonable to expect there will be some rate cuts in India to help the Modi administration in its electioneering. The fall in energy prices over the last few months has been an added bonus but the country’s world beating growth rate and large young population are the primary arguments for taking an interest in India. The Nifty Index continues to hold in the region of the trend mean. 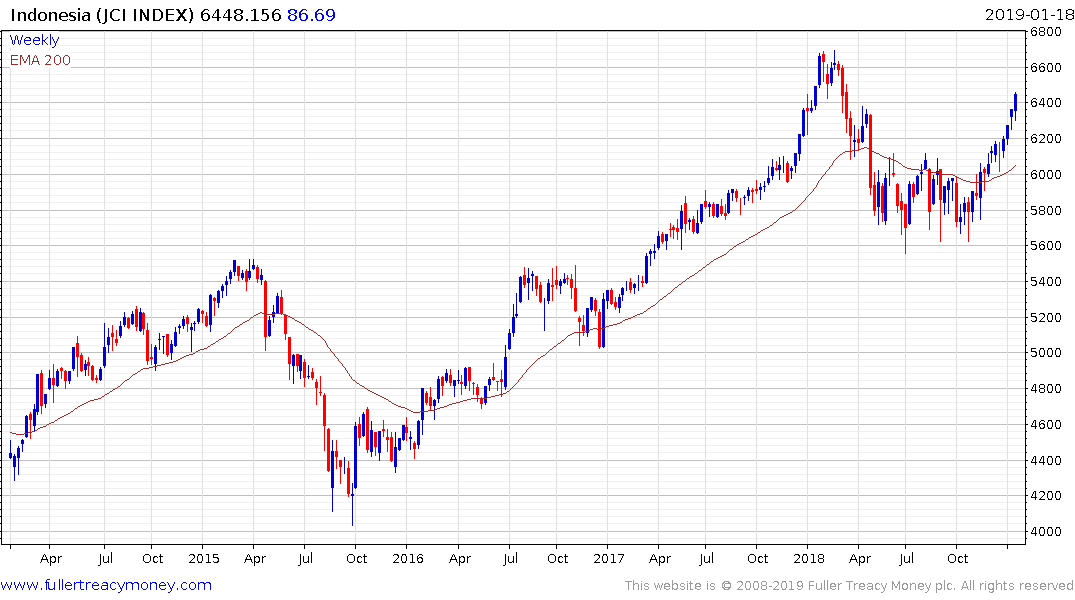 Indonesia’s election will be around the same time as India’s but is receiving considerably less media coverage. Widodo has been a stablising figure and is seeking re-election. The Jakarta Composite continues to exhibit relative strength as it pulls away from the region of the trend mean. 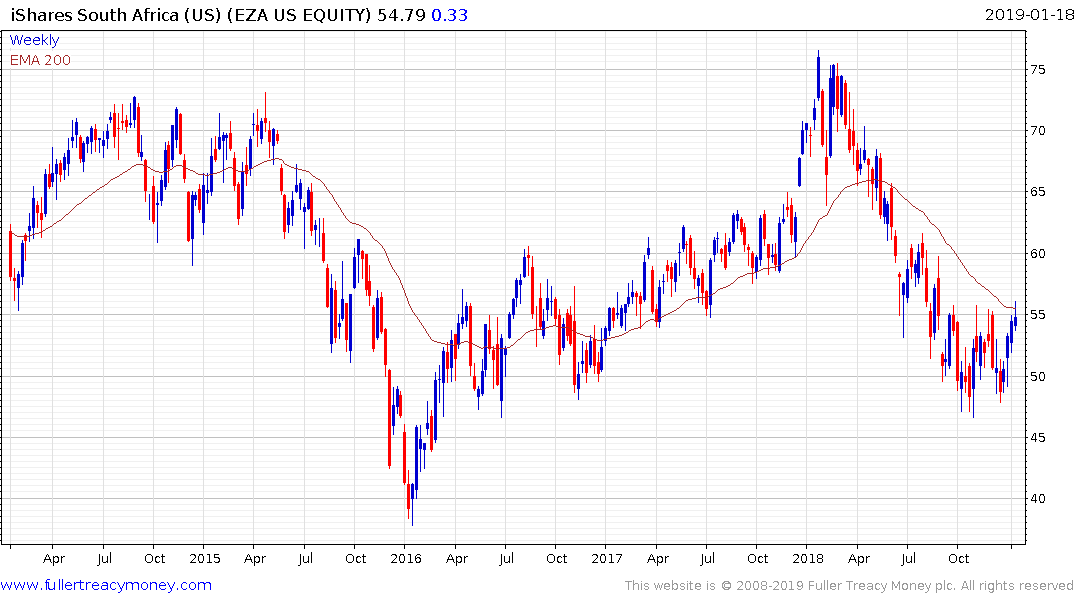 South Africa’s ANC has been rocked by corruption but it too has a new prime minister who will now face elections for the first time as leader of the country. The iShares MSCI South Africa ETF is currently steadying from the lower side of an evolving seven-year range. 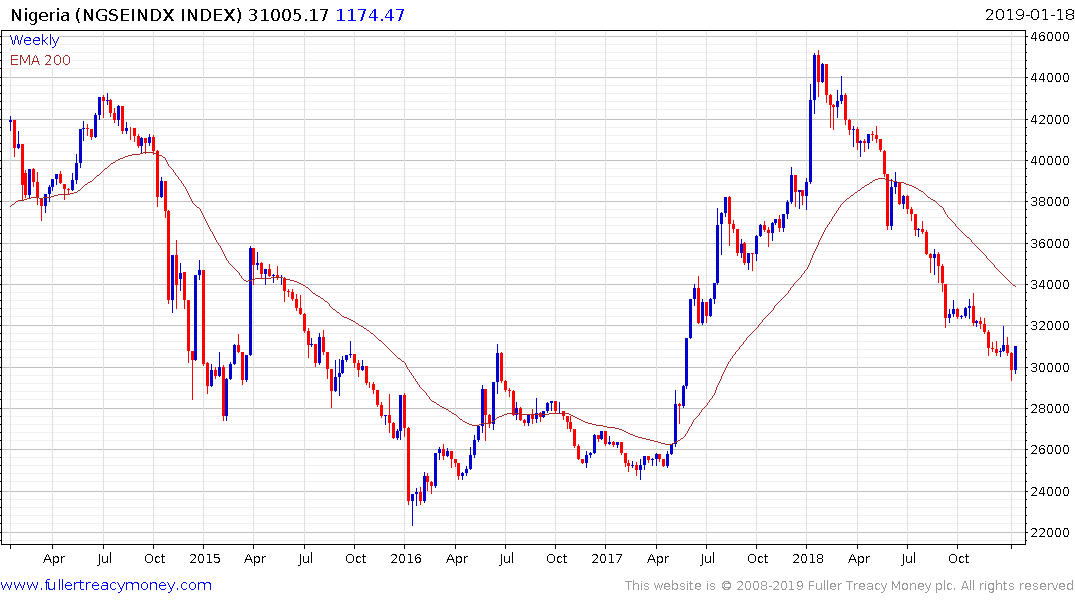 Nigeria’s governance is coming off a low base but arguably it is improving. Nevertheless, the fate of the stock market tends to be heavily influenced by oil prices. Despite the bounce in Brent Crude, the Index remains in a consistent downtrend. 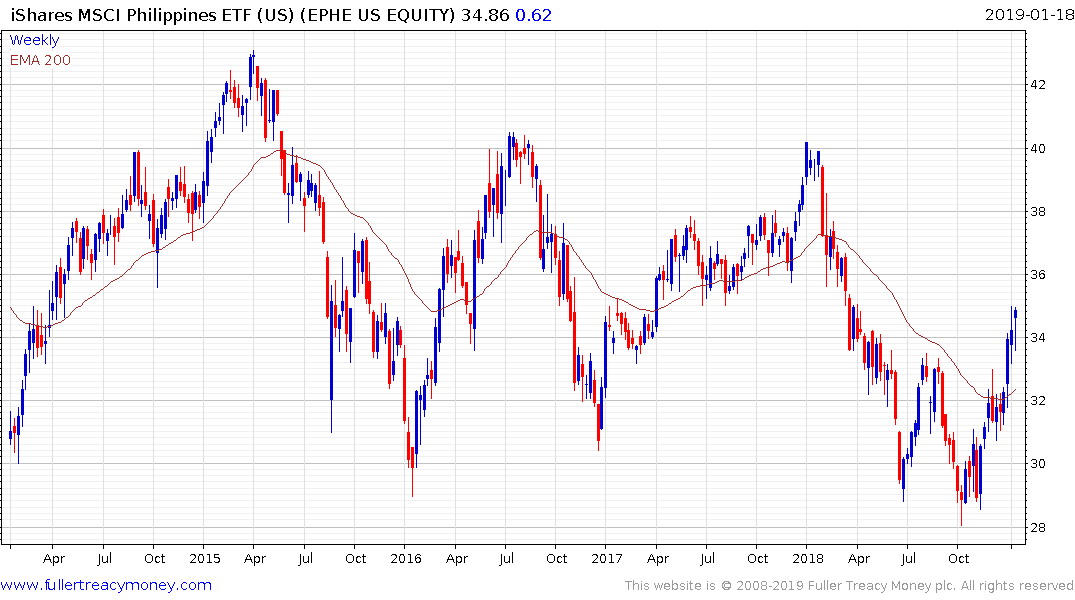 The Philippines’ Rodrigo Duterte suspended habeas corpus in his drive to combat drug dealing and the scale of executions has raised the ire of the media globally. On the economic front has been much more conventional and while the Peso has trended downwards throughout his tenure, the iShares MSCI Philippines ETF has been largely rangebound. It is currently rebounding from the lower side. 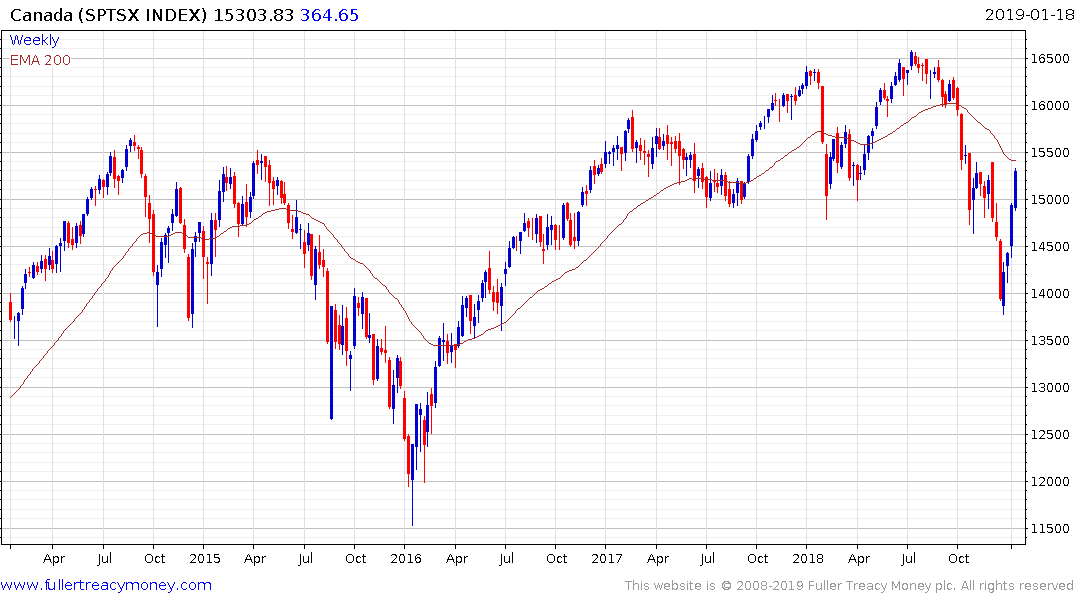 Canada seems to best by geopolitical issues from its tussle with Saudi Arabia on human rights questions to the arrest of Huawei’s CFO which has resulted in China making like difficult and even threatening the death penalty for Canadian citizens within its borders. The broader issue for Canada is the administration is ideology based when real politick demands solutions for the challenge of slowing global growth. The TSX has just about unwound a short-term oversold condition relative to the trend mean but needs to sustain a move above it confirm a return to demand dominance beyond short-term steadying. 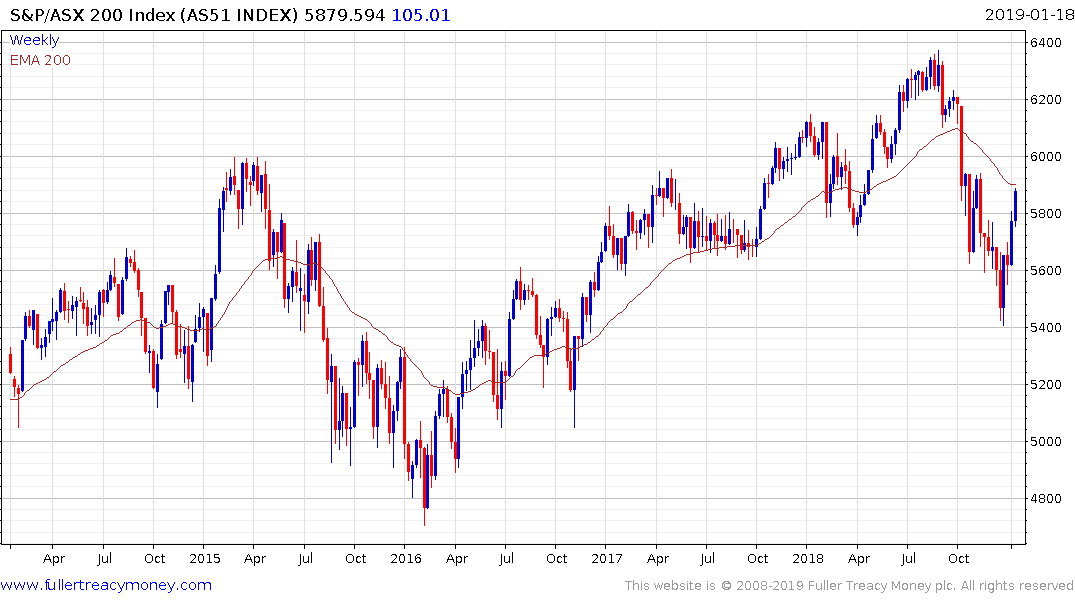 No countries are more influenced by the health of the Chinese economy than Taiwan, South Korea and Australia. In addition to recent softness in the housing market, Australia has to contend with slowing demand for commodities from its biggest customer. Those challenges continue to weigh on the Australian Dollar. The S&P/ASX 200’s performance has been flattered by the currency’s weakness and it has now completely unwound its overextension relative to the trend mean.