“Compared with a few days ago, chances for a reversal only from a technical point of view look to be smaller,” said Minoru Shioiri, a Tokyo-based manager in the credit and foreign- exchange trading division at Mitsubishi UFJ Morgan Stanley Securities Co. “The move has a lot to do with the onshore fixing. So, rather than a technical story, it’s a question over whether there is any change in the central bank’s stance over the yuan.”

UBS AG said yesterday recent depreciation may suggest the People’s Bank of China is shifting away from allowing a steady pace of gains and this may lead to a reversal of “hot money” inflows.

Investors should buy the offshore yuan at 6.12 per dollar as introducing more volatility into the markets is part of the process to liberalize China’s capital account, said Jonathan Cavenagh, a Singapore-based strategist at Westpac Banking Corp.

?“Where I would definitely reset my view is a move above 6.15 per dollar,” said Cavenagh. “That would potentially be a game changer because that’s where you potentially start to move to regions where some of the structured products in offshore yuan start to get stopped out. The move into the 6.15 to 6.20 range is something where I probably have to reconsider my view in a fairly meaningful way.”

Introducing greater volatility into the currency markets may be part of the PBoC’s plan to adjust its reliance on foreign capital flows and to cool the expansion of the shadow banking system but it is unlikely to be welcomed by China’s neighbours who are likely to feel a ripple effect. Considering just how large the shadow banking sector has become, it would be rash to expect the Yuan to continue to appreciate as it has done over the last decade since it is no longer in China’s interests to the have the strongest currency in the world. 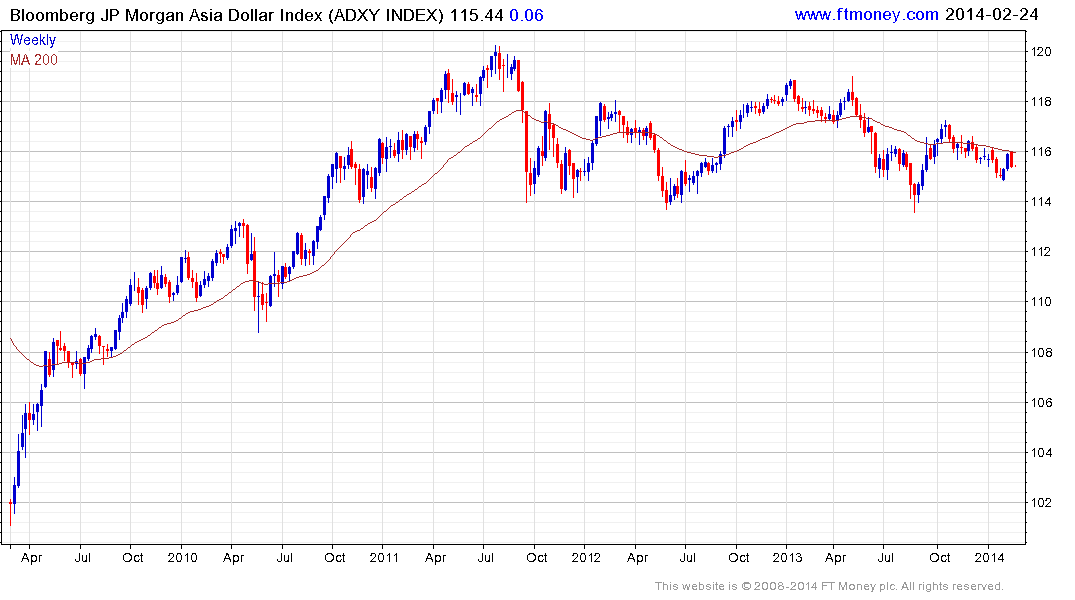 Until recently, the steady nature of the Yuan’s appreciation has been a stabilising factor for the Asia Dollar Index since it occupies a 38.66% weighting in the Index. However the potential for greater variability in the currency’s value suggests this will have a knock-on effect for the Index. It has been ranging below its 2011 peak for more than two years and a sustained move above the 200-day MA would be required to question potential for additional lower to lateral ranging. 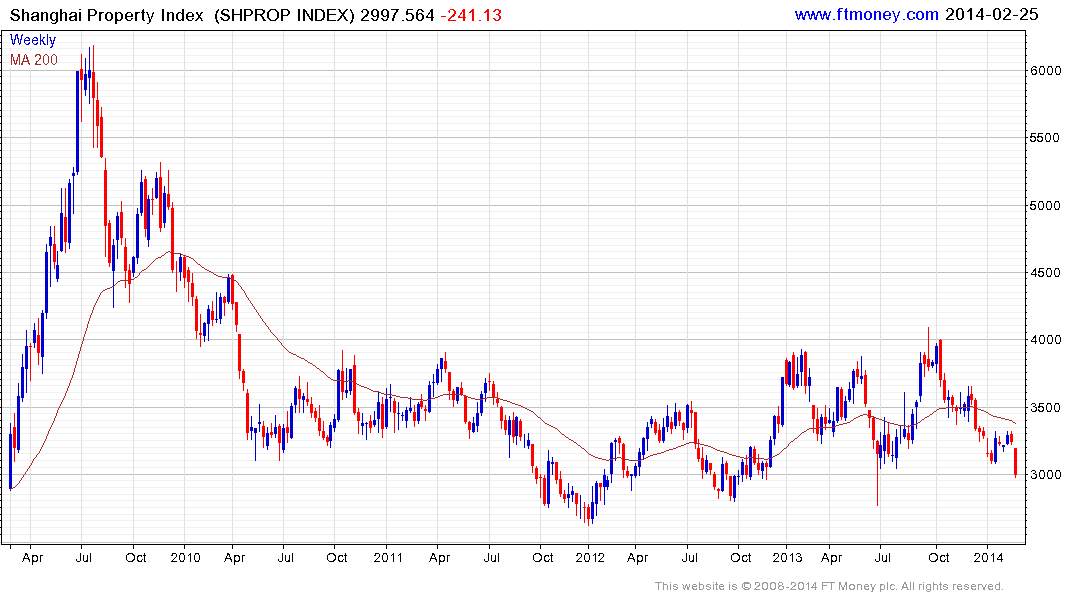 The reference in the above article to the fact that Chinese property developers have been accessing capital via US Dollar denominated loans is a cause for concern which is being reflected in their share prices. The Shanghai Property Index failed to sustain a move above 4000 in October and has pulled back to test the lower side of its range near 3000. A clear upward dynamic will be required to suggest a return to demand dominance in this area and to check potential for additional weakness.