On the theme of geo-political risk which impacted many Canadian-listed issuers in 2017, we see more of the same in 2018 as sovereign entities seek sources of revenue on the wings of social populism (real populism, not anti-Trump rhetoric). Ultimately, work stoppages provide sound-bites for speculators but as the cumulative effects of one-time bonuses for “back-to-work incentives” wear off and fundamental labour input costs rise, the actual cost pressures on metals extraction will continue to firm and provide additional pricing support.  Particularly important is the amount of Chilean copper production that will be subject to labour-related contract negotiation in 2018. Look for abundant news to add short-term price support through the first half of the year.

Other news items that may impact the price of Pb and Zn the second half of the year is increasing Zn output as major players re-start and expand operations in response to the firm Zn (Pb & Cu) carried over from 2017. We see 2018 as a transition year and do not expect significant supply response until 2019 (e.g., Lady Loretta re-start as part of Glencore’s near-term production target of 18% growth).

The longer-term outlook for base metals continues to be strong based on the lack of new Pb/Zn supply and not only incremental demand. In particular, the discovery and development of large-scale Pb/Zn deposits remains a challenge and should support higher longterm price datums.

Here is a link to the full report and the quoted section:

The mining sector went through a painful process of rationalization between 2011 and 2015 which resulted in exploration being cancelled and development of new mines being shelved. A substantial and sustained price rally is generally required to encourage new supply into the market following such an event. After two years of rallies the first signs of interest in developing new supply are now being seen but it will take time for it to come on line. 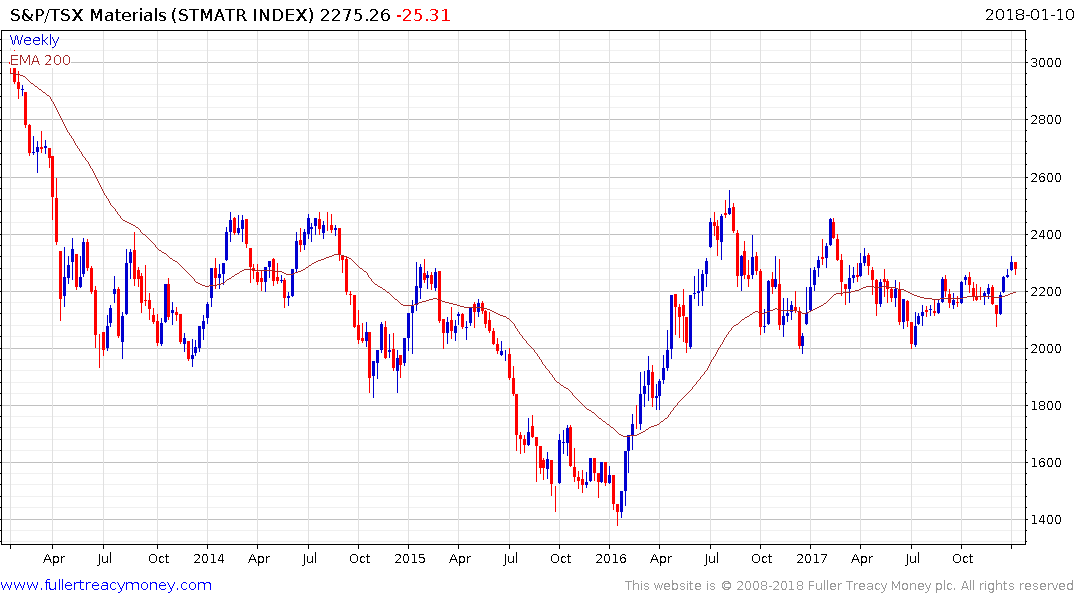 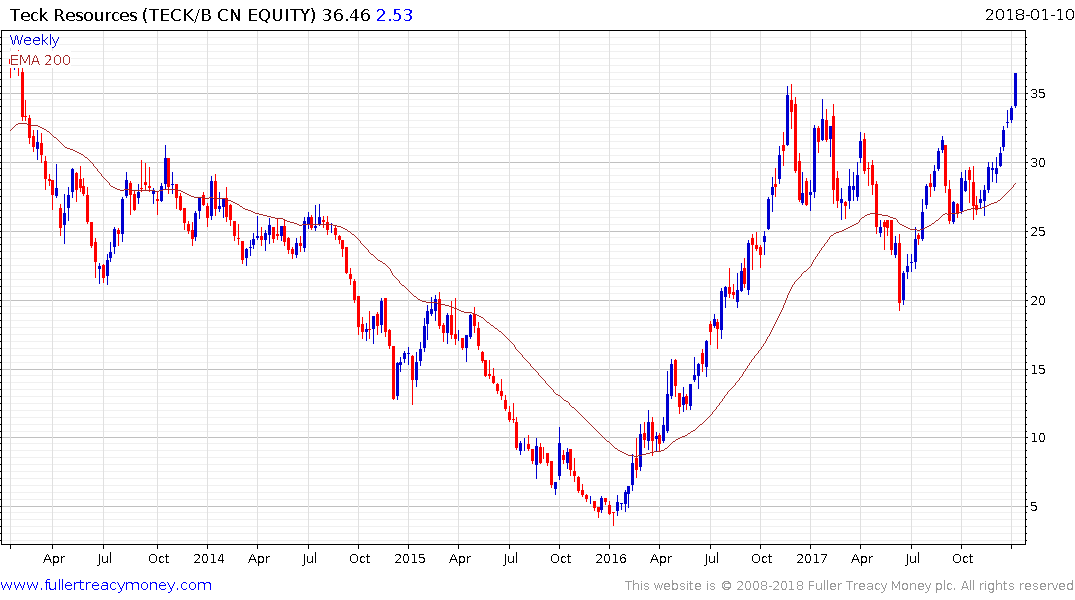 A challenge for the performance of the Canadian Materials Index versus the UK’s Mining sector or Australia’s Resources Index is the Index is heavily weighted by the combined Potash Corp of Saskatchewan and Agrium, Nutrien, at 14% as well as a large number of substantial gold mines. The diversified miners like Tech Resources on the other hand have broadly similar patterns to their international peers. 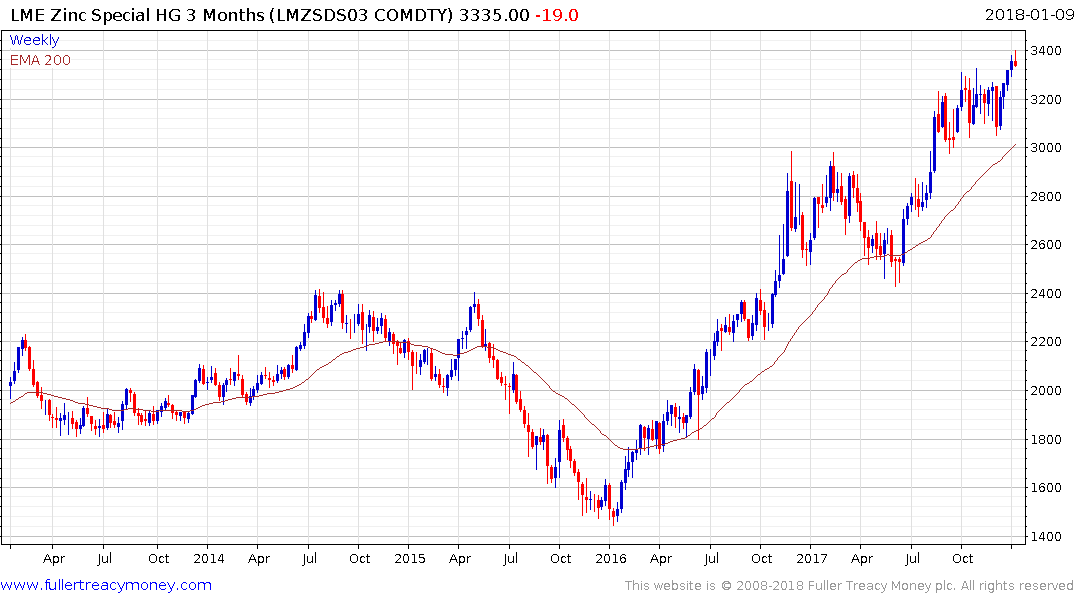 Zinc remains on a recovery trajectory and will need to hold the recent breakout to new recovery highs if the medium-term trend is to remain consistent. 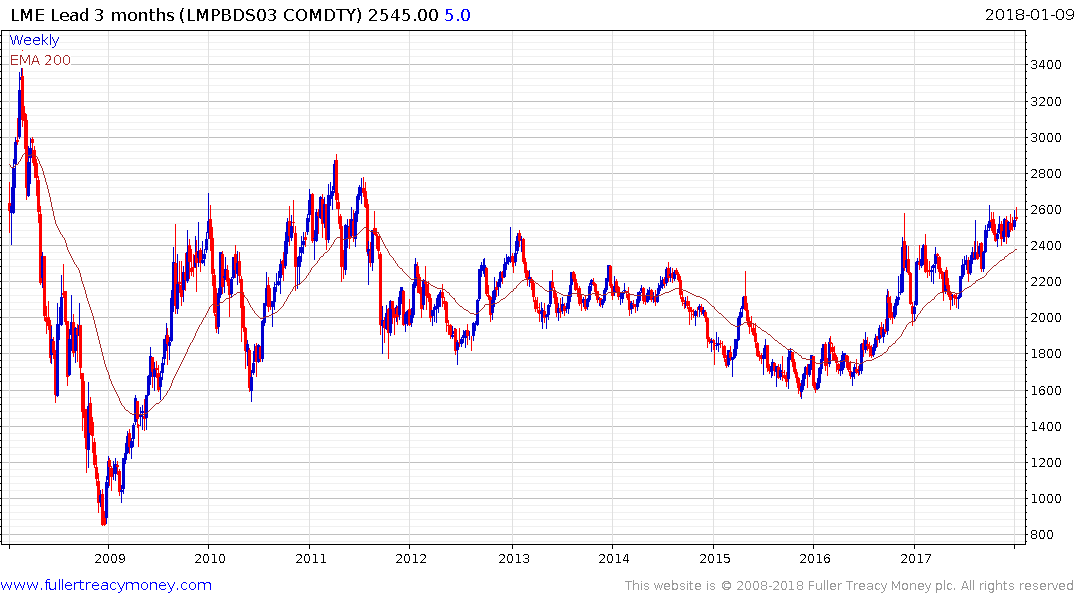 Lead is testing the upper side of an eight-year range and will need to hold the region of the trend mean if potential for continued upside is to be given the benefit of the doubt.