The five new Standing Committee members are party leaders with long careers in Chinese politics, including one of Mr. Xi’s longtime allies and a scholar of international relations. But the party declined to name a younger leader to the committee who might succeed Mr. Xi when his second term as president ends in 2023.

That was a departure from China’s carefully scripted transfers of power in recent decades and a possible signal that Mr. Xi intends to govern beyond this next five-year term. Mr. Xi may also want more time to test possible successors, while avoiding lame duck status with an heir waiting in the wings.

But by discarding the unspoken conventions that have ensured relatively stable leadership changes in recent years, Mr. Xi has pushed Chinese politics into new territory that critics have warned could lead to turmoil, or a cult of personality with echoes of Mao.

“If Xi goes for broke and breaks precedent by not preparing for an orderly and peaceful succession, he is putting a target on his back and risking a backlash from other ambitious politicians,” Susan L. Shirk, the chairwoman of the 21st Century China Center at the University of California, San Diego.

“By taking such a risk, he shows himself to be more like Mao than we originally thought — he demonstrates his power by overturning institutions,” said Professor Shirk, a former State Department deputy assistant secretary for China policy.

Xi Jinping is 64 years old which means he will be older than the “unofficial” retirement age of 68 when the next Party Congress is next held in 2022. He has not anointed a successor so there is going to be a hiatus in promotions for ambitious party cadres over the next five years. Meanwhile the trajectory of his rule points towards his desire to extend his tenure beyond two consecutive terms.

If Mao unified the country and Deng delivered prosperity then Xi likely sees his contribution as regaining China’s geopolitical status. Island building, modernisation of the military, international military bases, a blue water navy, investing in technological innovation and overseas infrastructure projects are all likely to figure highly in his list of priorities.
The bigger domestic question is what kind of priority the Xi administration is going to put on deleveraging the property market. The Shanghai Property Index continues to steady from the region of the trend mean but will need to hold the progression of higher reaction lows if medium-term scope for continued higher to lateral ranging is to be given the benefit of the doubt. 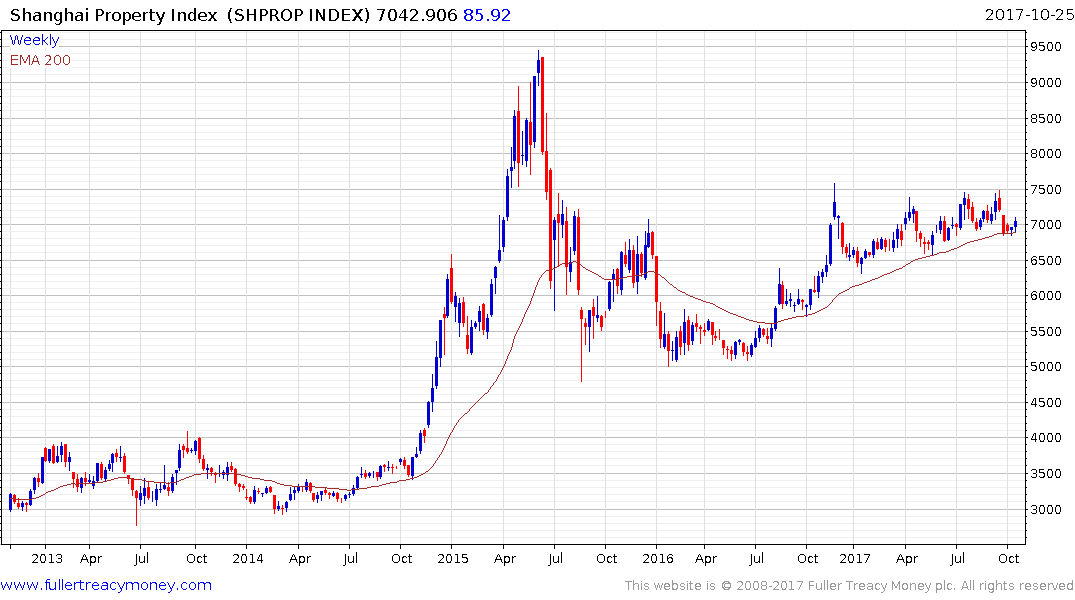 While separate from considerations about investments, China’s policy of activism in international commentary means that it is increasingly difficult to find objective opinion in the media. For example, companies like Bloomberg and Reuters generate most of their income from terminal sales and China is a major growth market for these businesses. Therefore, they do not have a financial incentive to promote investigative journalism. As the editors of the Cambridge University press will attest, writing anything which upbraids the Chinese administration is met with opprobrium by the Chinese thought police. The New York Times is one of the few mainstream media outlets willing to write what it thinks about China.