The impact showed in Wednesday’s smallest increase in stock leverage since late June. The CSI 300, which was up almost 17% for the month on Monday, has now given up half those gains.

An attack from the People’s Daily newspaper on Moutai was taken as another sign of Beijing’s desire to slow the recent run-up, after government-backed funds sold shares or announced plans to so in the past few days. Increasing tensions with the U.S., the central bank’s clampdown on easy money and a drop in retail sales are also adding up as reasons to start selling.

Data Thursday showed the Chinese economy returned to growth in the second quarter, expanding a better-than-expected 3.2%. While industrial output rose 4.8% from a year earlier, retail sales shrank 1.8%, weaker than a projected 0.5% increase. That suggests the recovery is still largely industry-driven, with consumer sentiment remaining fragile.

“Retail sales came worse than expected, which hurts sentiment towards some consumer stocks,” said Daniel So, a strategist at CMB International Securities Ltd. “A stabilizing economy means the scale of monetary easing may be smaller than expected. Ample liquidity was one of the key reasons for markets to jump.”

Overseas investors continued to trim their holdings of mainland-listed shares, selling nearly $4 billion worth of the stocks through exchange links in the past three days.

The CSI 300 pulled back sharply today to test the upper side of the underlying range. This represents the first area of potential support so evidence of demand returning in the next day or two will be required if the benefit of the doubt is to be given to the breakout. 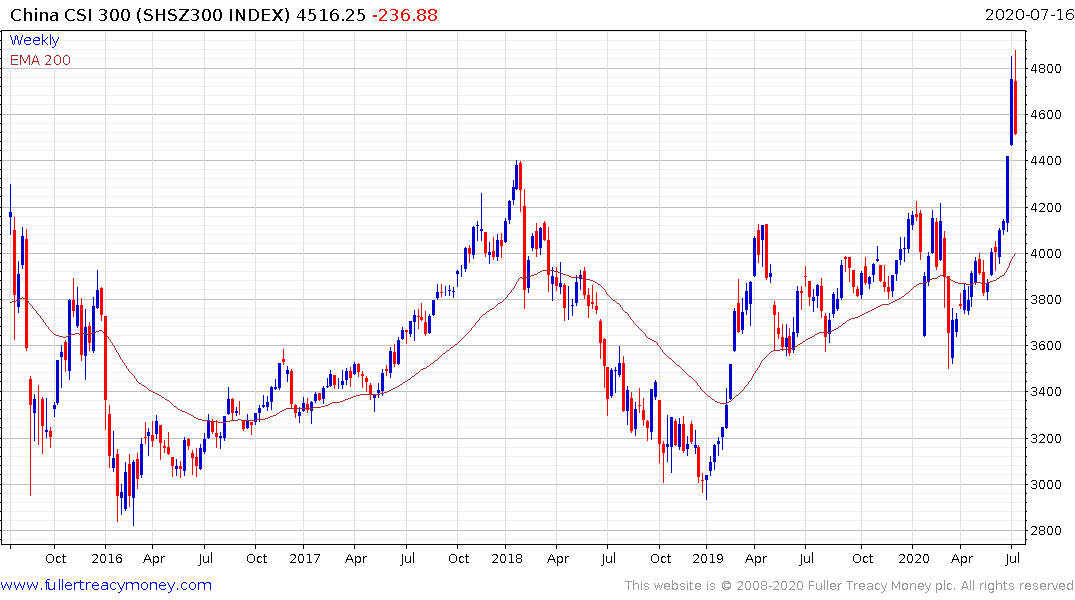 Two questions immediately spring to mind. The first is whether the state sponsorship of the stock market, which contributed to the breakout has now been withdrawn? The opprobrium heaped on Kweichow Moutai in the state media following its spectacular run over the last few years suggests the authorities are worried about fueling a bubble. 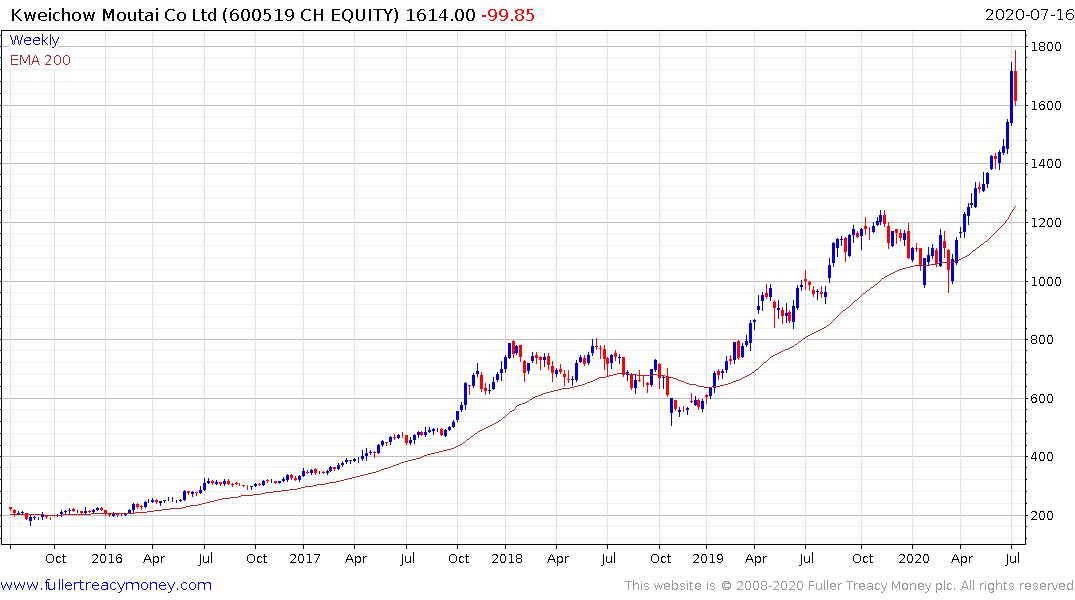 They have acted much more quickly on this occasion to curtail speculative interest than on past occasions. This suggests they have either become more cautious about supporting the stock market or this is a hiatus before additional supports become evident following a reversion towards the mean.

The second question is whether the outlook for the Chinese economy, with moderating consumer demand facing off against recovering industrial production, is a template for what we might expect to see elsewhere?

With factories opening up, there is scope for back orders to be filled and a quick surge in delayed productivity. Meanwhile consumers probably had the recovery pop earlier so the snap back may have already occurred. It is quite likely July is not going to see the same year over year growth in sales as June did for most businesses. That’s as much to do with the rising case numbers as it is with the base effect flattering the June numbers.

This article from Bloomberg covering the increasing number of bank runs underway in China suggests the consumer is much less in tune with government messaging than is being suggested by the Communist Party. Here is a section:

While stopgap measures, which have included rolling over debt and delaying loan payments, have limited an immediate surge in bad debt, the regulator said the fundamental issues of poorly managed banks and the deteriorating ability of companies and individuals to repay loans are still far from solved. They are also asking banks to forgo 1.5 trillion yuan in profit this year by offering lower lending rates, cutting fees, deferring loan repayments, and granting more unsecured loans to small businesses to help the economy.

Authorities have more than 3,000 banks to oversee, most of which are small, rural entities without ready access to capital. In another unprecedented move, China now plans to allow local governments to use about 200 billion yuan from bond sales to help smaller banks replenish their capital. 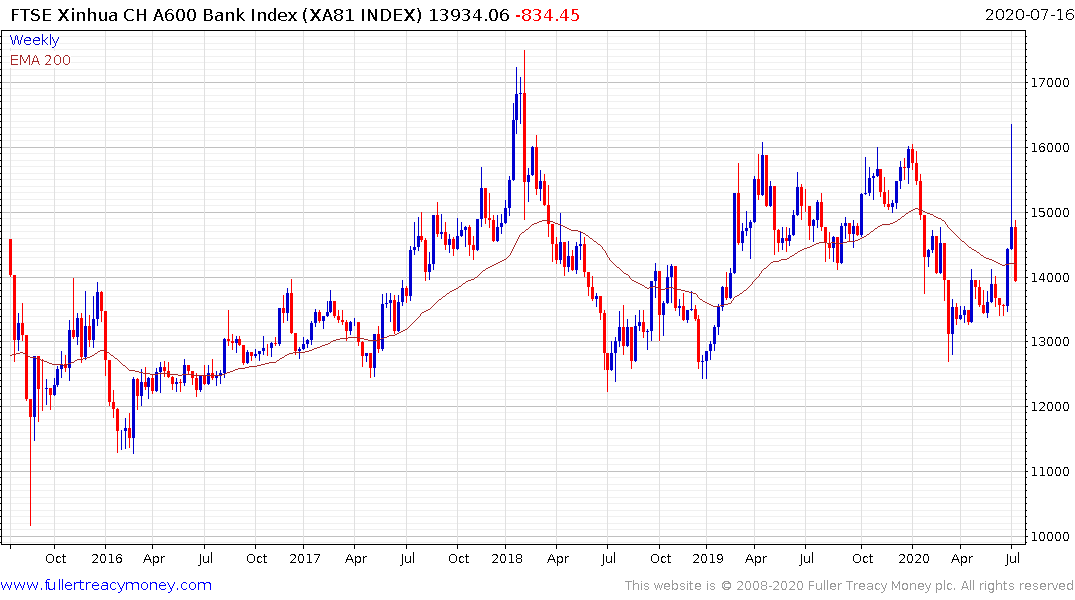 The FTSE Xinhua Banks Index has almost fully unwound the early July surge to confirm resistance at the upper side of the five-year range. It will need to hold the 13000 level if support building is to be given the benefit of the doubt.

I introduced a stop on my FTSE/Xinhua China A50 Index long today following the downward dynamic. I will be taken out of the position on any additional weakness.