"Globally, the BOJ’s continued policy accommodation should help cushion the blow from the Fed’s balance sheet normalization and the ECB’s expected tapering next year," said Frederic Neumann, co-head of Asian economics research at HSBC Holdings Plc in Hong Kong. "The BOJ will not be able single-handedly to keep rates low everywhere, but its commitment to continued monetary accommodation should restrain any possible global yield rise."

?Indeed, a sharper divergence between its policy outlook and the rest of the developed world may aid the BOJ’s cause should the yen continue to weaken, helping to accelerate inflation by making imports pricier. The yen slumped to its weakest since July on Monday and shares moved higher as markets digested Abe’s landslide.

Abe’s decisive win on Sunday will embolden supporters of Abenomics, the prime minister’s signature economic policies centered around monetary and fiscal policy accompanied by structural reforms. It also increases the likelihood of BOJ Governor Haruhiko Kuroda being reappointed when his term comes up in April, according to Bloomberg Intelligence analyst Yuki Masujima, meaning the central bank’s policy framework won’t change.

Naohiko Baba, chief economist for Goldman Sachs in Japan, noted in a report on Monday that "the largest tangible result" of Abe’s commitment to the very ambitious inflation target has been to keep the yen weak and boost equities. The currency has declined more-than 20 percent since Abe took office in December 2012, while the Nikkei 225 Stock Average has roughly doubled.

It is arguable whether Abe has a mandate to change the pacifist constitution. However, the original reason he called the election was to receive approval for redeploying revenue from the increased sales tax for spending rather than paying down debt. Therefore, by holding his majority, he can claim resounding approval for his stimulus program.

Abenomics has been complemented by Bank of Japan and state pension buying of equities and this election outcome is unlikely to change that policy. Meanwhile the shift towards even more stimulus represents a headwind for the Yen. The Dollar rallied up to test the March, May and July highs below ¥115 this morning but a sustained move to new recovery highs will be required to confirm a return to demand dominance beyond the short term. 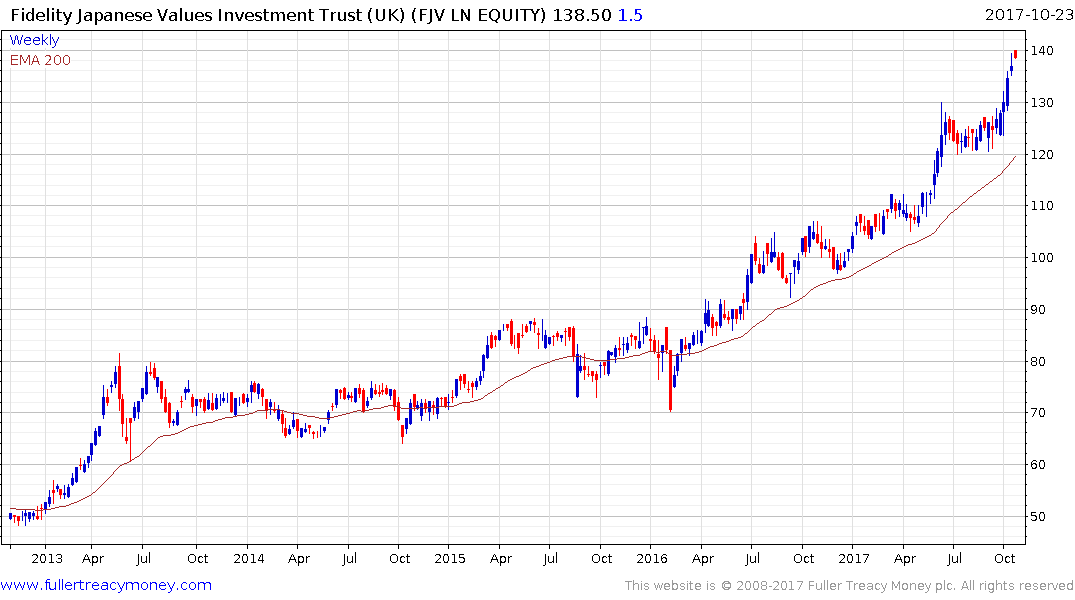 The UK listed Fidelity Japan Values Trust trades at a discount to NAV of 7.93%, which has tightened from almost 19%, and has a market cap of £89 million.  It focuses on small to medium sized companies and while somewhat overextended in the short-term, a sustained move below the trend mean would be required to question medium-term scope for additional upside. 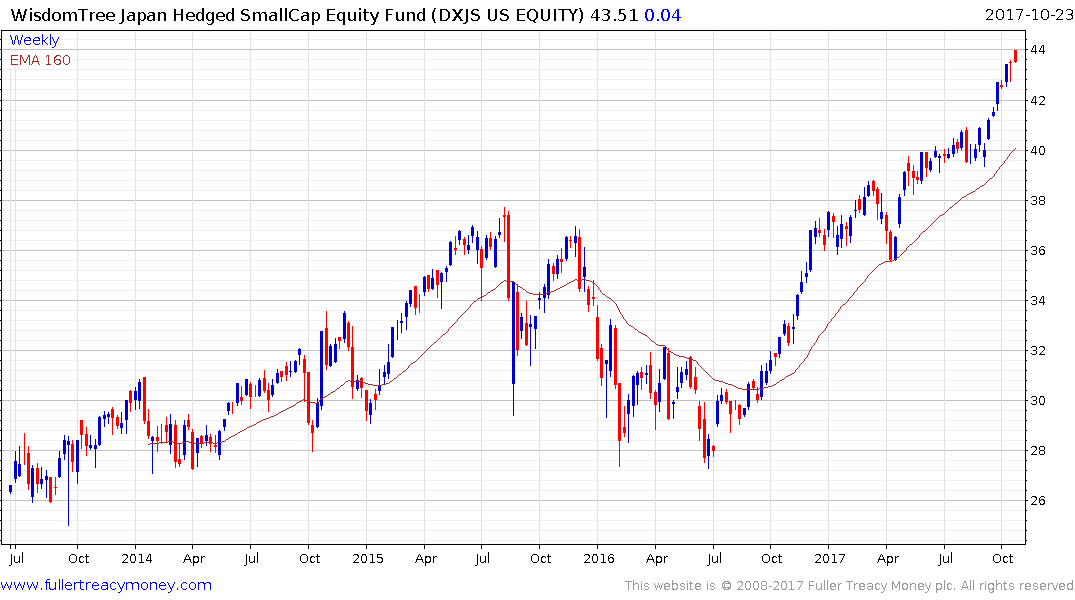 The US listed Wisdomtree Japan Hedged Small Cap Fund has a similar trajectory.

A point I’ve made in past commentaries, but which is worth repeating, is that Japan failed to achieve inflation following its stock and property market crashes in the 1980s despite repeated attempts at stimulus. There is a temptation to look at Japan and think their experience is the rule rather than the exception. We should at least consider how difficult it was to achieve inflation during two of the greatest disinflationary decades in history. If that is the case, is the return to outperformance of Japan symptomatic of an evolving inflationary cycle? For me at least that forms the basis for a working hypothesis which prices have so far confirmed. That would also suggest the five-year range on US Treasury yields is a base rather than a range.