Why You Should Care About Taproot, The Next Major Bitcoin Upgrade
Comment of the Day

Why You Should Care About Taproot, The Next Major Bitcoin Upgrade by Eoin Treacy

For one, Taproot ultimately empowers the Lightning Network to unleash its full potential as a proper scaling technology for Bitcoin. Currently, the second layer protocol can be spotted in action in the Bitcoin blockchain, reducing coins' fungibility. Fungibility is vital for a monetary good to actualize the medium of exchange role because it allows for coins to be seen as equal. If transaction outputs were seen differently, they could suffer from discrimination by the receiver, preventing users from using their BTC for payments in certain conditions.

In addition, the Lightning Network and other complex wallets and contracts will enjoy greater efficiency and lower transaction fees, further empowering the usage of Bitcoin as a medium of exchange. Enabled by Schnorr signatures, even the most complex transactions made between Taproot-supporting wallets will incur the same fees as simple ones. Furthermore, this reduction of costs and the increased flexibility and capabilities for smart contracts will ultimately enable very complex setups that were previously not feasible in Bitcoin.

One of the biggest arguments against bitcoin retaining its crown as the most significant cryptocurrency is the slow and limited size of transactions. The Taproot protocols being implemented tomorrow are aimed at addressing many of those arguments.

The last big upgrade, Segwit, was introduced in August 2017. The price doubled ahead of its introduction and tripled in the four months afterwards. Crypto investors are conditioned to expect big advances following the four-year halvening events and the similarity of a four-year interval between software updates will also have raised expectations for a major rally over the next six months. That’s the rationale for the $250,000 price target, by the end of January, currently being promulgated. 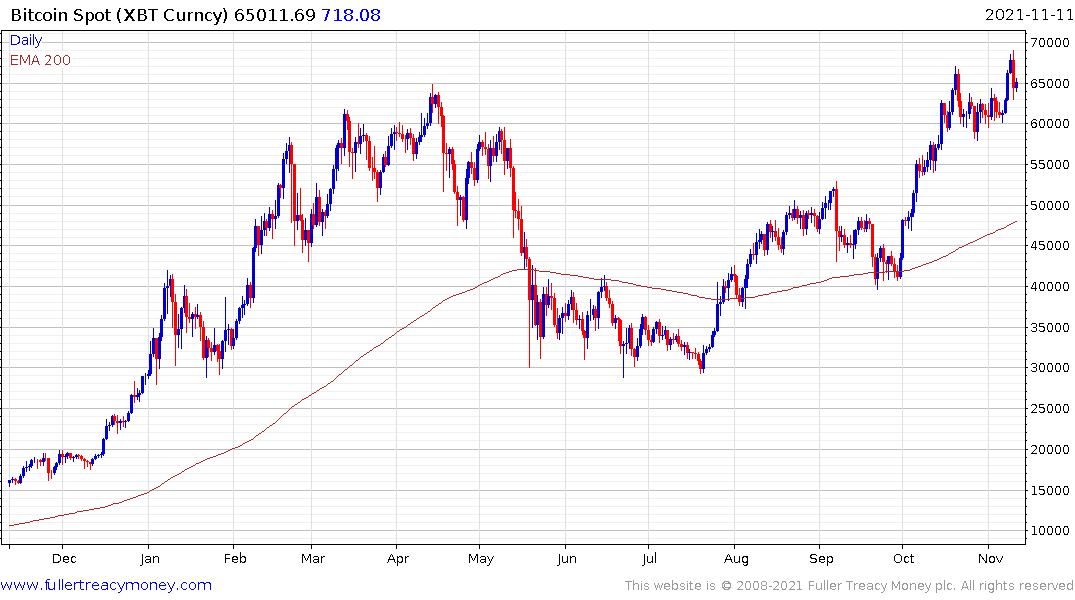 The price posted a downside key day reversal yesterday but did not follow through on the downside today. Yesterday’s decline was a warning shot for the breakout but sustained move below $57,000 would be required to challenge the demand dominated environment.