Why This Is India's Decade
Comment of the Day

Why This Is India's Decade by Eoin Treacy

In the post-Covid environment, global CEOs appear more comfortable with both work from home and work from India. The emergence of distributed delivery models, along with tighter labor markets globally, has accelerated outsourcing to India. The number of global in-house captive centers that opened in India over the last two years was almost double that of the prior four years. During the two pandemic years, the number of people employed in this industry in India rose from 4.3 million to 5.1mn,and the country's share of global services trade rose 60bps to 4.3%. In the coming decade, the number of people employed in India for jobs outside the country is likely to at least double to over 11mn,and we estimate global spending on outsourcing could rise from US$180bn per year to around US$500bn by 2030. This will have significant effects on both commercial and residential real estate demand.

If India is already the 'office to the world', it is increasingly becoming its factory as well. We anticipate a wave of manufacturing capex owing to government policies aimed at lifting corporate profits' share of GDP via tax cuts and hard dollars for investing in specific sectors, and we note that performance-linked incentive (PLI) schemes now total US$33bn across 14 sectors. Multinationals are more optimistic than ever about investing in India, as the all-time high on our MNC Sentiment Index shows (Exhibit 39),and the government is encouraging investment by both building infrastructure and supplying land for factories. The trends outlined in Morgan Stanley’s multipolar world thesis and cheap labor add to the mix. We estimate that manufacturing's share of GDP will rise from 15.6% currently to 21% by 2031, which implies nominal output jumping from US$447bn to about US$1.49trn.

Apple got a bad shock this week when its most significant iPhone production facility was shut down as part of a COVID lockdown in China. For a company that prides itself on forcing suppliers to compete with one another, that was a significant hiccup. Apple has already been building more products in India and that trend is likely to accelerate over the next decade.

Remote work, taken to its logical conclusion, means there will be a lot more diverse faces on zoom calls in future. The USA has over 10 million open positions and India has hundreds of millions of young people, baby boomers are retiring en masse and the skilled immigration has ground to a halt. That’s a recipe for more outsourcing of service oriented work to India.

At the same time, the massive swell of new workers means plenty of hands for the kind of low end manufacturing that many countries rely on as the first step towards development. India’s collectivist heritage means it skipped the mass employment through industrialization stage and instead built out the services and higher end (pharmaceuticals) manufacturing sector. That gap will soon be filled.

India’s national security is inherently tied to energy imports. Cities like New Delhi are already among the most polluted in the world so investing in renewables and nuclear fill twin goals. 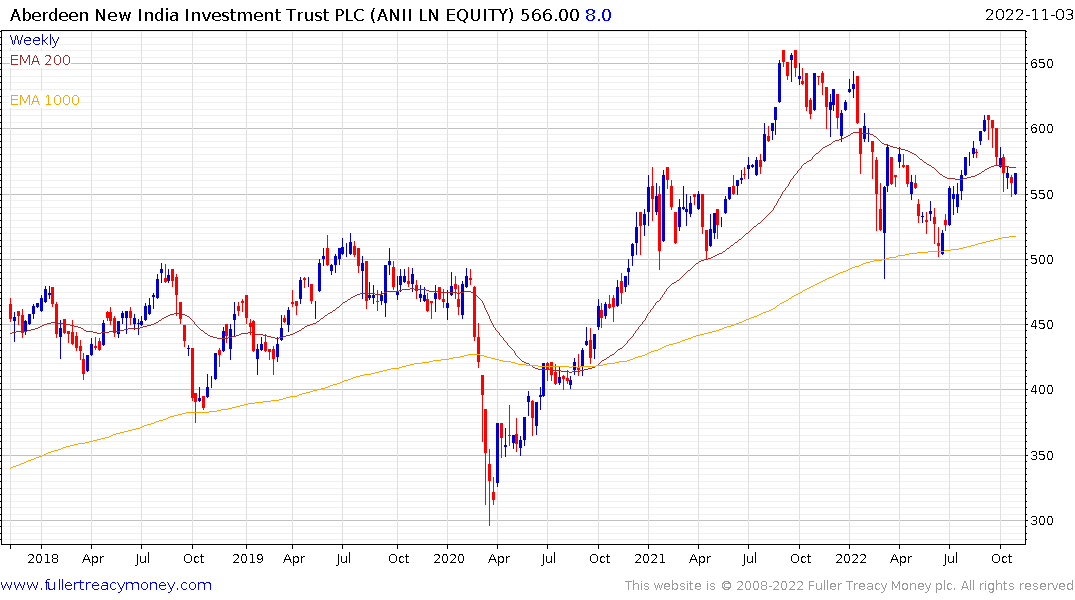 The Aberdeen New India Investment Trust remains in a choppy uptrend but is currently firming from the region of the 200-day MA.