Investors remain very concerned about the impact of slowing economic growth on global oil demand. While Q2 did show some softening, there have been several very bullish developments that most investors seem to ignore. For example, analysts focused all of their attention on the IEA’s recent downward revision of 2020 global demand projections by 100,000 b/d over the course of the last three months. However, at the same time, the IEA quietly revised historical demand higher by 190,000 b/d in 2017 and 110,000 b/d in 2018–a fact that few people wrote about. Notably, Q4 of 2018 was revised higher by a very large 300,000 b/d.

Our models tell us that more revisions are forthcoming. As always, our analysis revolves around the “missing” barrels. For example, the IEA still claims after its latest set of historical revisions that global demand for all of 2018 equaled 99.3 mm b/d while total supply equaled 100.3 mm b/d. This suggests that inventories should have grown by 1 mm b/d or 365 mm b for the full year. Instead, the IEA reports that inventories were unchanged for the year. We refer to the “missing” barrels as oil that was produced but neither consumed nor put in storage. We have long argued that “missing barrels” are a clear indicator that the IEA will revise higher its demand figures and once again that has been correct.

The IEA has a long history of demand underestimation. In eight of the last nine years, they have been forced to revise global demand higher by 1.1 m b/d on average (a number that is creeping higher). Despite this chronic underestimation and the continued presence of “missing barrels,” investors continue to ignore the warning signs of stronger than expected demand.

The backwardation in the oil price curve suggests at least a near-term supply deficit relative to demand. That has been created either by the slowdown in the global economic which could have impacted demand growth or it is a combination of factors like the reduction in OPEC and Russia supply and the slowdown in unconventional onshore US production. Regardless of the argument, the backwardation doesn’t lie. 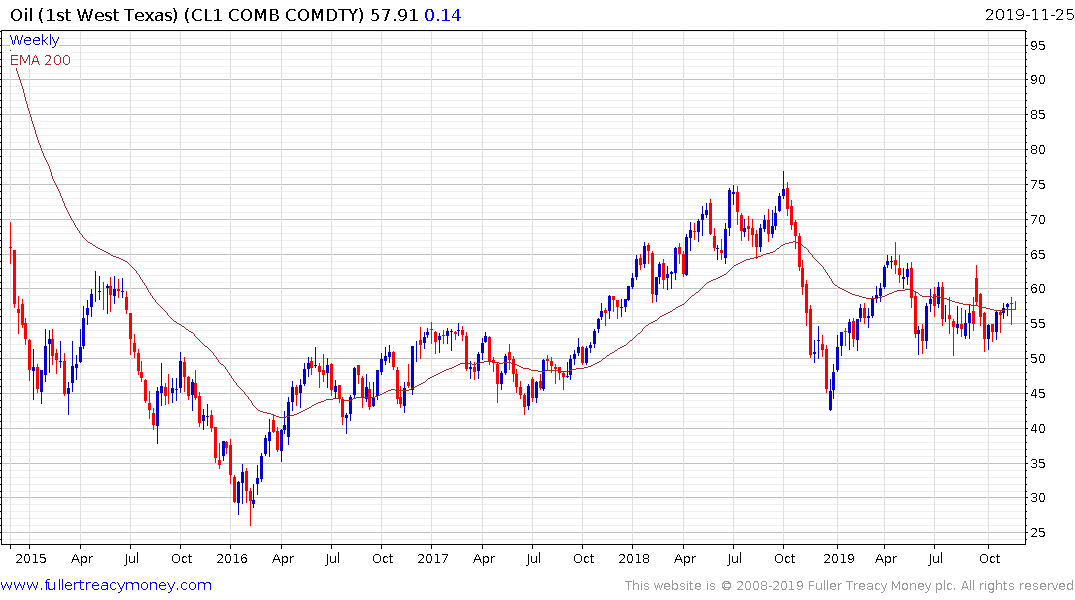 Brent Crude oil Is back testing the region of the trend mean but has not yet been able to break out; despite the backwardation. That suggests there is still an argument going on about whether the supply surplus/demand deficit is sustainable.

US onshore supply growth is the wildcard in global production because it is both elastic and sensitive to price movements. Drilling activity is moderating and there are a number of energy related bond issues under duress. That suggests prices will need to rise to encourage new supply into the market.

It is also worth considering that longer-term prices need to rise because drillers have to be able to hedge at profitable levels to source the funding necessary to commit to drilling programs. The belly of the West Texas Intermediate curve is around $52. That two/three-year futures price will need to rise to curtail short-term upside potential. The risk to that conclusion is global growth but I think there is clear potential we have seen the trough in global growth but a trade deal resolution will probably be required to confirm it.