Why the Bezzle Matters to the Economy
Comment of the Day

Why the Bezzle Matters to the Economy by Eoin Treacy

First, the bezzle represents recorded or perceived wealth that does not exist as real wealth (productive capacity), and as such it boosts collective recorded wealth above real economic wealth. This discrepancy gooses GDP growth in at least three ways. One way this happens is that bezzle creates a temporary wealth effect that boosts consumption and investment spending to a level higher than where either normally would have been. A second way is when part of this false wealth shows up either as higher income or higher profits for the entity that benefits from the boost in recorded wealth. A third way is when rising market values collateralize increases in borrowing that are then used either to raise prices further or to increase spending. It is not a coincidence that GDP growth rates are always higher than expected in periods during which a great deal of bezzle is being created.

Second, the reverse is true when the bezzle is directly or indirectly recognized and amortized, as it must eventually be. One or more sectors of the economy (households, businesses, local governments, farmers, or banks) must absorb the loss. As they do, the wealth effect reverses, their lower earnings or profits are reflected in lower-than-expected GDP figures, and they are forced to pay down the debt. Just as it is not simply a coincidence that bezzle is created mainly during economic booms, nor is it a coincidence that it tends to be recognized during economic downturns or financial crises.

Third, bezzle creation seems to be systemic. There are periods, in other words, when it seems that the operation of the financial system errs toward creating bezzle, and these times always seem to be followed by periods in which the bezzle is automatically wrung out of the system.

Fourth, as Galbraith especially pointed out, the bezzle has a self-reinforcing impact on growth in either direction. When it is being created, the illusion of wealth tends to reinforce growth and encourage the creation of more bezzle. When it is being amortized, it tends to inflict additional costs of financial distress on the economy, especially to the extent that it was financed by debt.

I find discussion of the bezzle in valuations a useful way of thinking about how the wealth effect is produced and eventually reverses. The Japanese property bubble or China’s property/infrastructure bubble both fit neatly into those terms with the boom and bust of property markets making relatable backdrops for discussion.

What I find particularly interesting at present is the rush on to stake claims in the metaverse. It has captured the imagination of investors and not least because it is being overlaid with the rapid appreciation of NFT tokens.

This report from Redmayne Bentley and this from KGI Securities were kindly forwarded by subscribers. PGIM has also put out a flashy website with the 10 Transformational Technologies Powering the 21st Century.

Bain & Company Technology report calling for a repeat of the roaring 20s and Stanford’s 100-year study of artificial intelligence may also be of interest.

When the bezzle created is virtual there is no way to value it and when there are no income streams it all becomes a question of rarity and liquidity. This article from Loupfunds may also be of interest.

They estimate the size of the NFT market about $7 billion with a $1.25 trillion market opportunity. With that kind of potential multiple who wouldn’t be attracted.

Even more importantly, when those kinds of figures were circulated about bitcoin in 2012 very few people believed them. No one wants to miss out on that kind of opportunity again so money is pouring into the sector. That does not mean value is being created, although it could be. It definitely improves the wealth effect.

Matt Levine opined yesterday that Wall Street bankers feel like their best year ever was outdone by teenagers making millions in the crypto markets. Here is a section:

“There’s always somebody doing better than you,” said Mark Gorton, the founder and chairman of high-frequency trading firm Tower Research Capital. The number of teenagers worth $20 million because they giddily loaded up on crypto can be hard on the ego. “Everyone compares themselves to those people,” Gorton added. “I kind of consciously try not to.”

When the clients and providers of services both feel like they are missing out, that virtually ensures we are going to hear a lot more about metaverse opportunities in 2022. 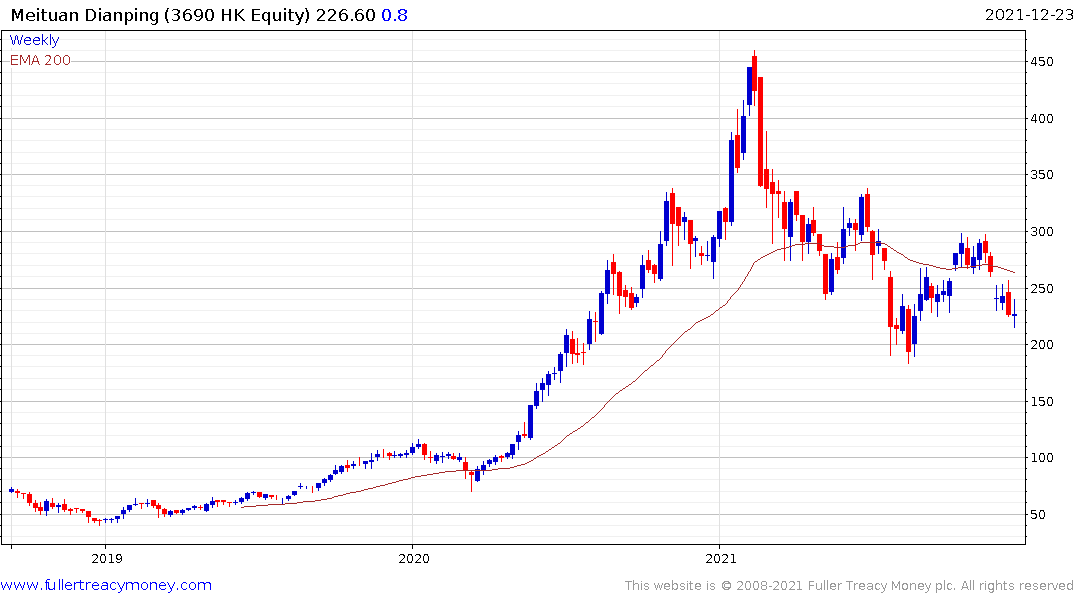 Meta Platforms/Facebook has made a splashy play on the sector but Meituan Dianping pioneered the wholly integrated experience between the physical and virtual worlds. 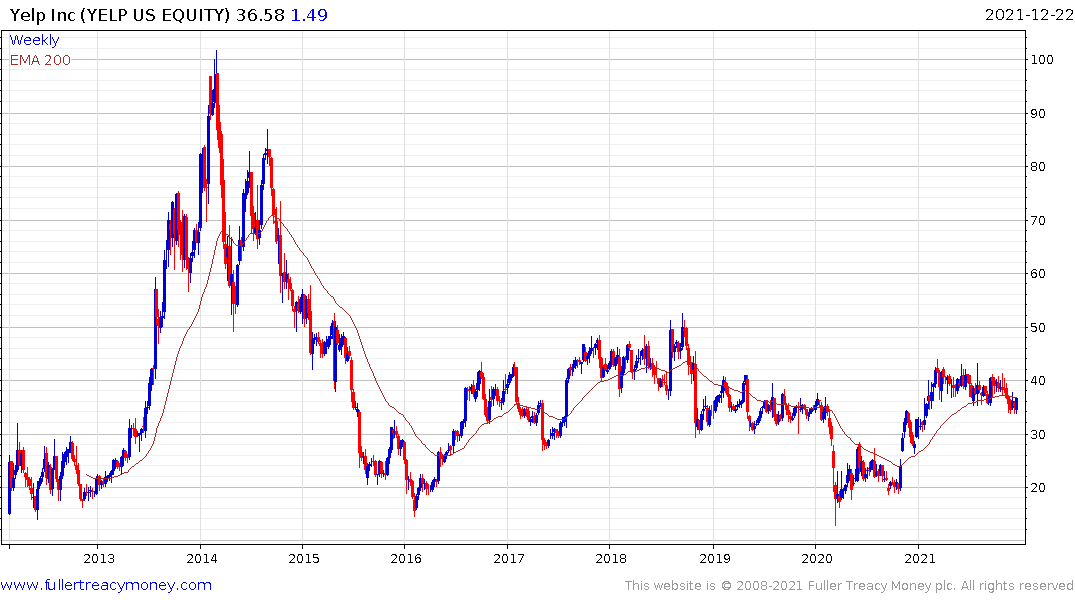 From that perspective Yelp is probably more of a metaverse company than many realise. 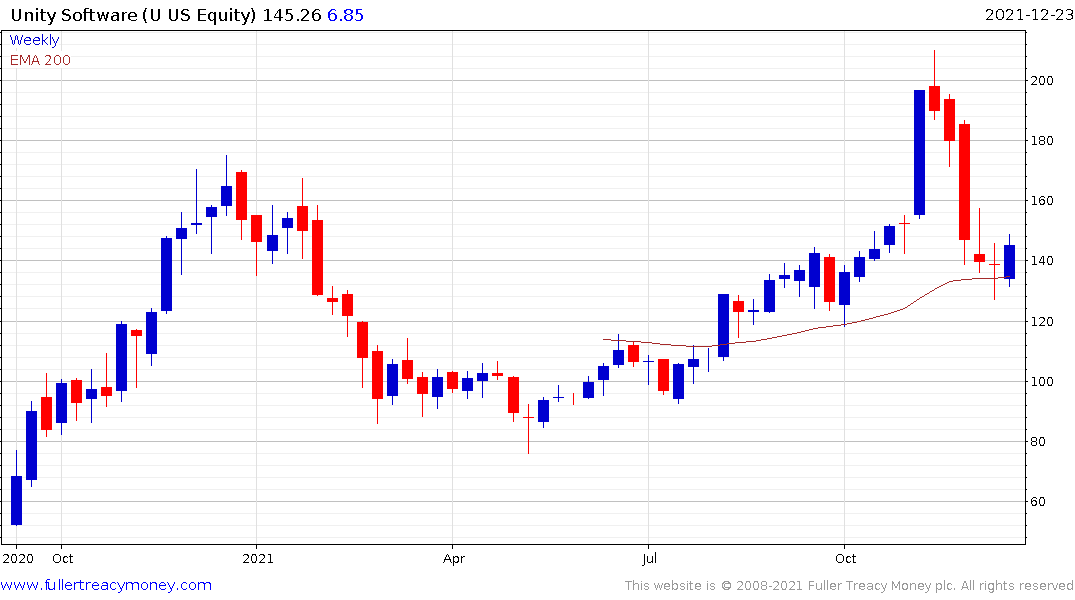 Unity Software supplies the software to build many of the online platforms that support the metaverse projects. The share is firming from the region of the trend mean.