Why Nickel is heading to $30,000/t sooner than you think
Comment of the Day

Why Nickel is heading to $30,000/t sooner than you think by Eoin Treacy

In the last great nickel bull market in 2006 and 2007 the key theme was the lack of sulphide nickel supply from Australia and Canada. Back in the day, analysts wrote at length about the lack of investment in these traditional sources of supply. The Chinese read those same reports and invented nickel pig iron to get around the problem of $50,000 per tonne nickel. The success of NPI and the negative impact it had on the nickel market was much greater than anyone expected. Today, we are in a similar theme as to 2006. We have had 5-8 years of limited investment in the traditional sulphide producers at a time when the NPI industry in China has been cut back dramatically because of the export ban. In reality there is no reason why nickel prices won’t repeat what they did in 2006-7 and go back to $50,000 per tonne but for now we think $30,000 per tonne is more realistic given the metal overhang on the LME. The key risk of course is that the ban is lifted, but we think that is highly unlikely near term. Physical tightness in the nickel markets is about to become more pronounced as NPI’s take downtime and inventories on the LME begin to drawdown. To put the Indonesian export ban into perspective it’s the same as if Russia, Saudi Arabia and Iran switch off their oil wells and reduce global supply by at least 30% overnight. Imagine what that would do the oil price so that is why $30,000 per tonne nickel is not inconceivable near term.

The export ban on unprocessed ore is a positive for Indonesia as it attempts to develop a greater value added minerals sector to help boost economic growth. The greater uncertainty however is whether the ban will persist beyond the upcoming election since we can assume that vested interests on both sides will be vocal in expressing their arguments. 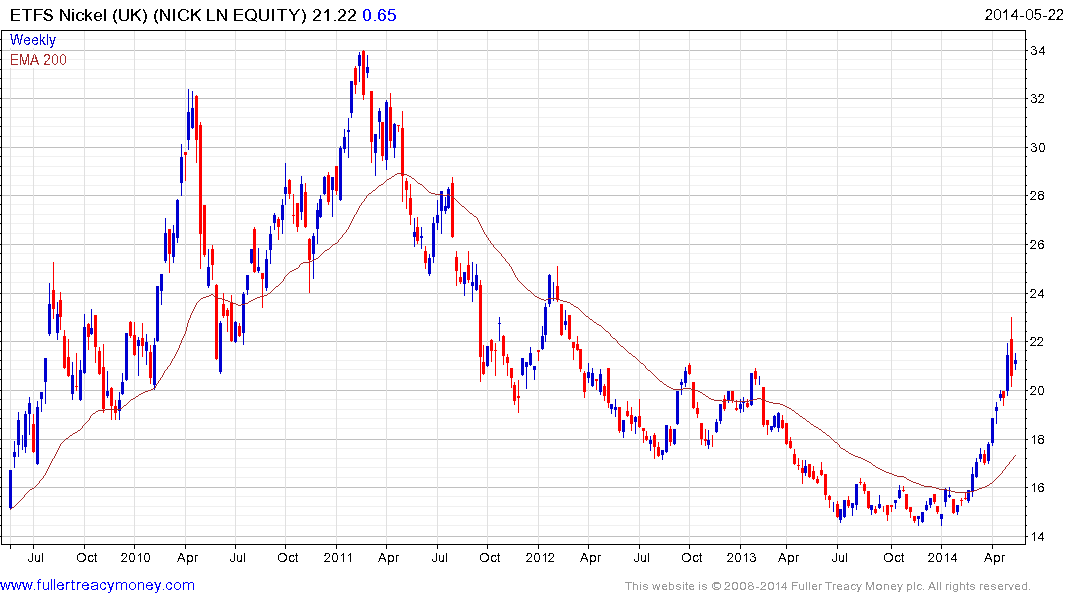 The London listed Nickel ETFS broke out of an almost yearlong base in early March and hit at least a short-term peak last week. However, this remains a fundamentally driven rally and prices have bounced over the last couple of days. $30,000 can be viewed as an ambitious target for this rally but if current prices are sustained, the fortunes of nickel miners should improve. 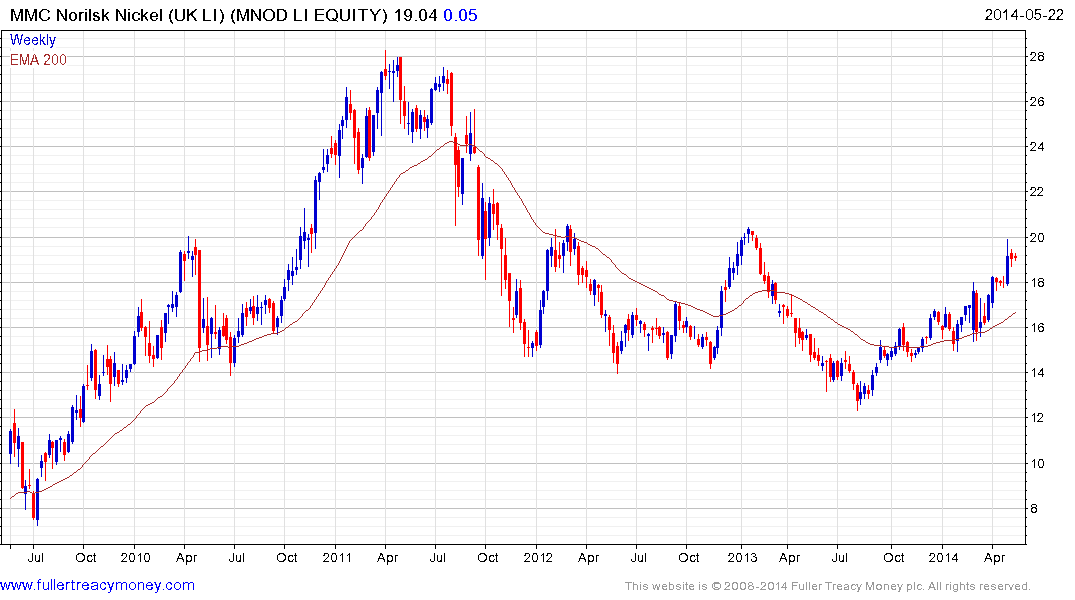 Listed on the UK’s International Exchange, Norilsk Nickel (Est P/E 11.06, DY 7.3%) has rallied back to test the psychological $20 area and has at least paused over the last couple of weeks. A sustained move above that level will be required to confirm a return to demand dominance beyond the short term. 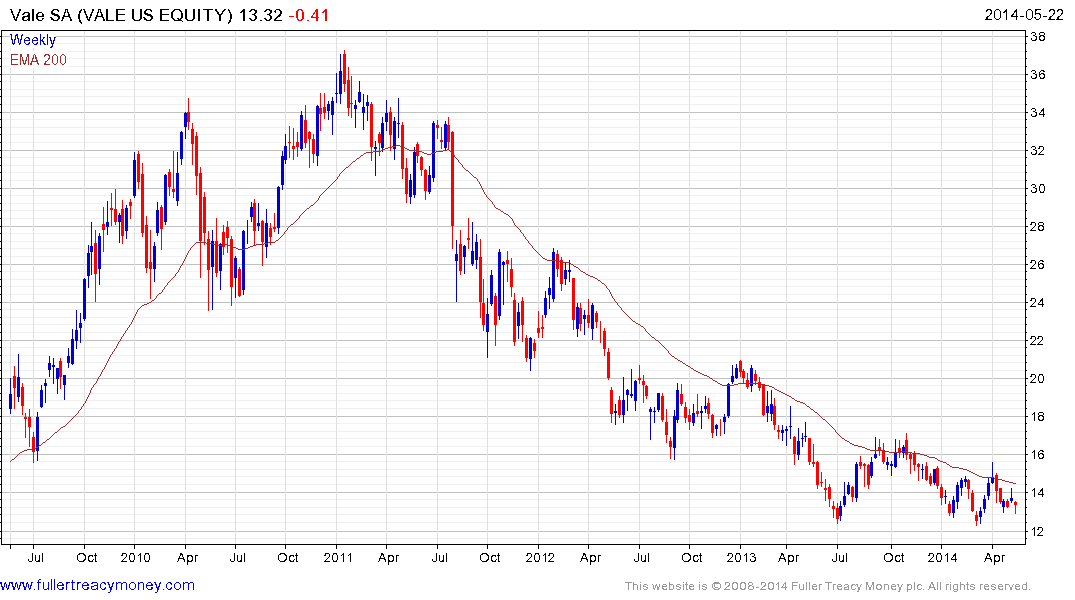 Nickel represented approximately 8% of VALE’s revenues last year through its Canadian and Indonesian operations. The share (Est P/E 6.45, DY 6.16%) continues to languish in a range and a sustained move above $15 would confirm a return to demand dominance beyond the short term. 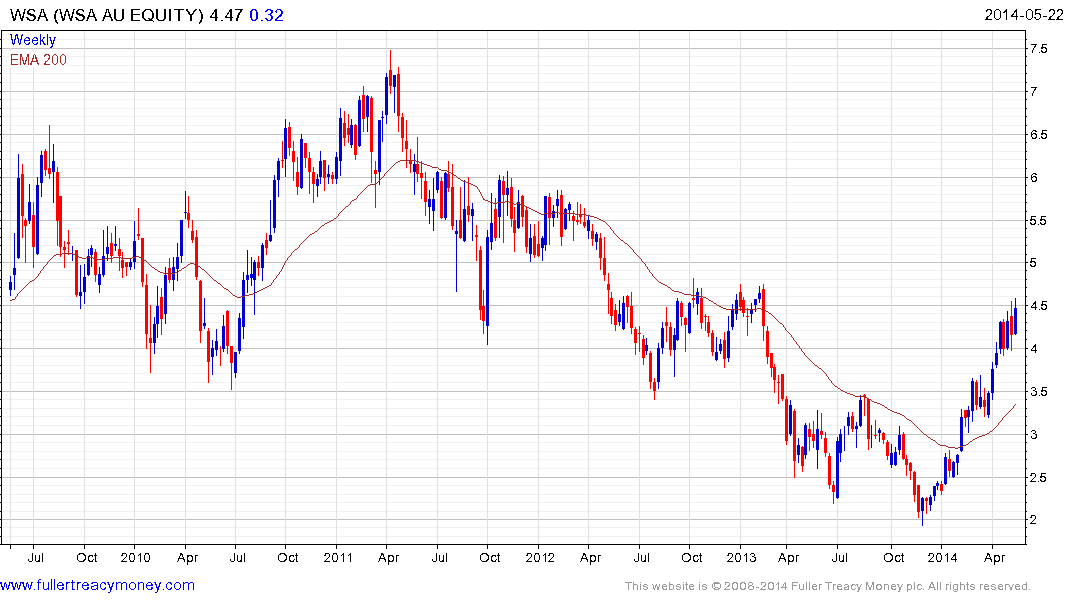 Australian listed Western Areas (Est P/E 56.58, DY 0.32%) offers greater leverage to the nickel price than the above two high yielding but more conservative plays. The share has held a progression of higher reaction lows since December and a sustained move below A$4 would be required to check the advance beyond a brief pause. 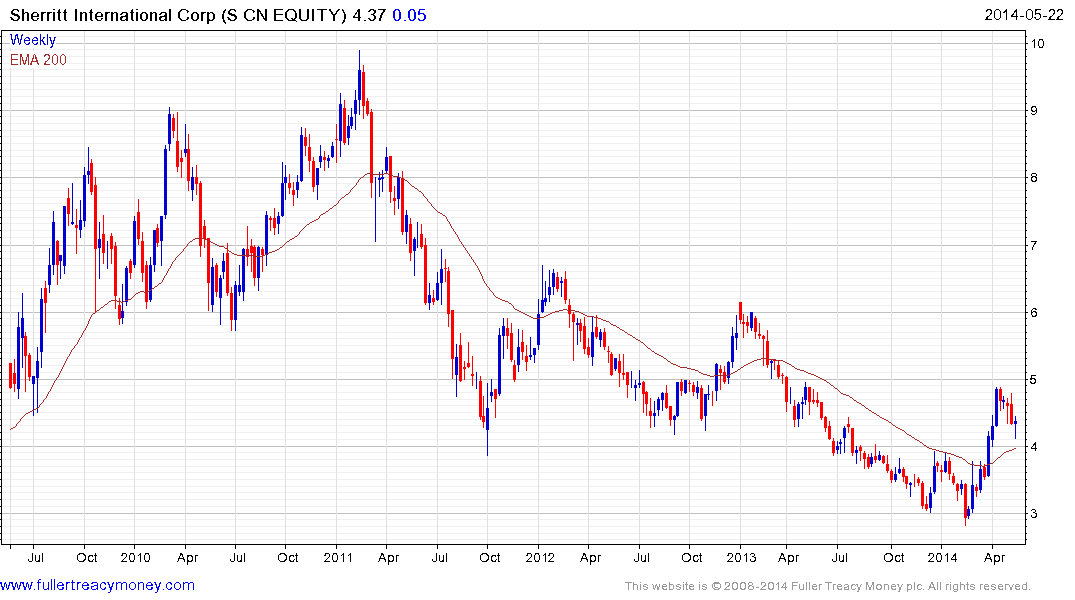 Canadian listed Sherritt International was downgraded to BB with a negative outlook last week due to the costs incurred with developing its Madagascar based nickel/cobalt project. Analysts expect the company to return to positive earnings by next year. The share found support this week in the region of the 200-day MA and a sustained move below C$4 would be required to question current scope for some additional upside. 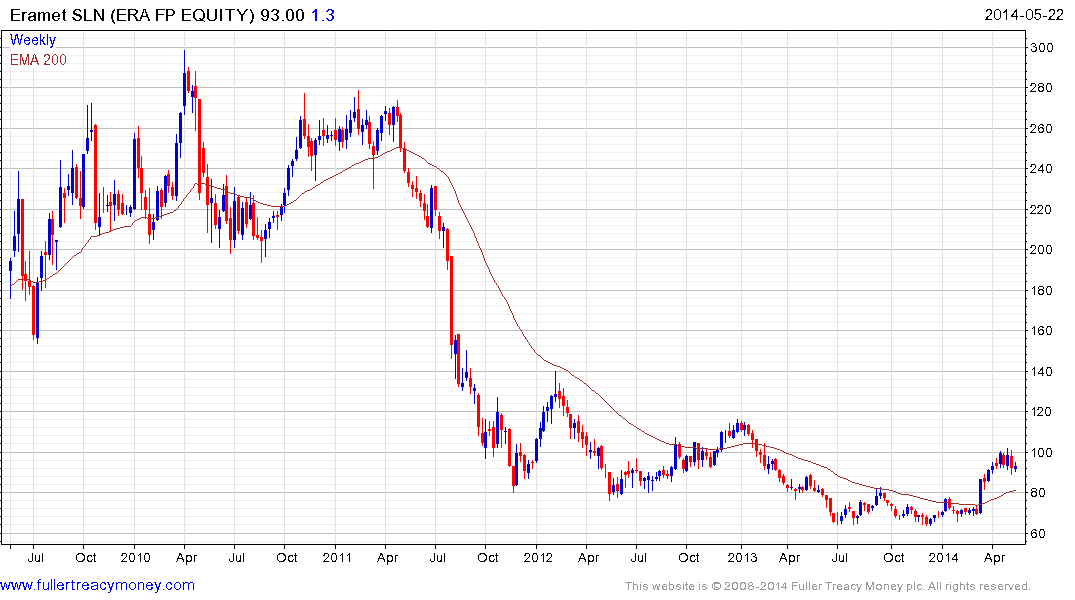 France listed Eramet has been through a painful process of rationalisation and still has an estimated P/E of over 900. The share’s fortunes are tied to the nickel price and it will need to hold the majority of its recent advance if recovery potential is to be credible.