Why 47,000 grocery workers in California may go on strike
Comment of the Day

Why 47,000 grocery workers in California may go on strike by Eoin Treacy

He makes $21 an hour, but his wages have not risen in five years. He hopes a new contract will help him and his co-workers keep pace with California's cost of living increases. Prices in California are rising nearly twice as fast as the rest of the country, according to the Labor Department.

"We're on the front lines. We work in the stores. We're pulling in the money," Escarcega said. "We're not being taken care of so that's why we're here."

Escarcega said that going on a strike would be a "last resort" for employees, but that "everybody wants to speak up and get what we deserve."

Grocery workers often have more leverage in negotiations with employers than other retail workers because groceries are perishable and companies can ill-afford work slowdowns, experts say.

Minimum wages in California were $10 in 2016 and have risen increments over the last few years. They are due to hit $15 an hour in July next year. The predictable result of those increases is to cause people who were previously making above minimum wage to demand more money for the same job. It comes down to basic human psychology. No one wants to think of themselves as a minimum wage worker so when the lowest rate rises everyone wants to sustain their buffer to enhance their own feeling of self-worth. That might be considered the push side of the argument.

Homelessness remains an intransigent issue which is only getting worse and over the last 18 months tent cities have popped up all over West Los Angeles. When I moved here six years ago there were no tent cities outside of downtown and Venice. Today there are people living under every freeway overpass.

Typhoid Fever, typhus and tuberculosis are already popping up in Skid Row and some speculate it is only a matter of time before leprosy is found in Los Angeles’ homeless communities. These diseases are concentrated among drug users but the problem was enough to kill off Eric Garcetti’s ambitions of becoming President before his campaign even got started. I don’t mind admitting that the homeless issue has been a central factor in our family’s discussions about potentially moving out of Los Angeles. 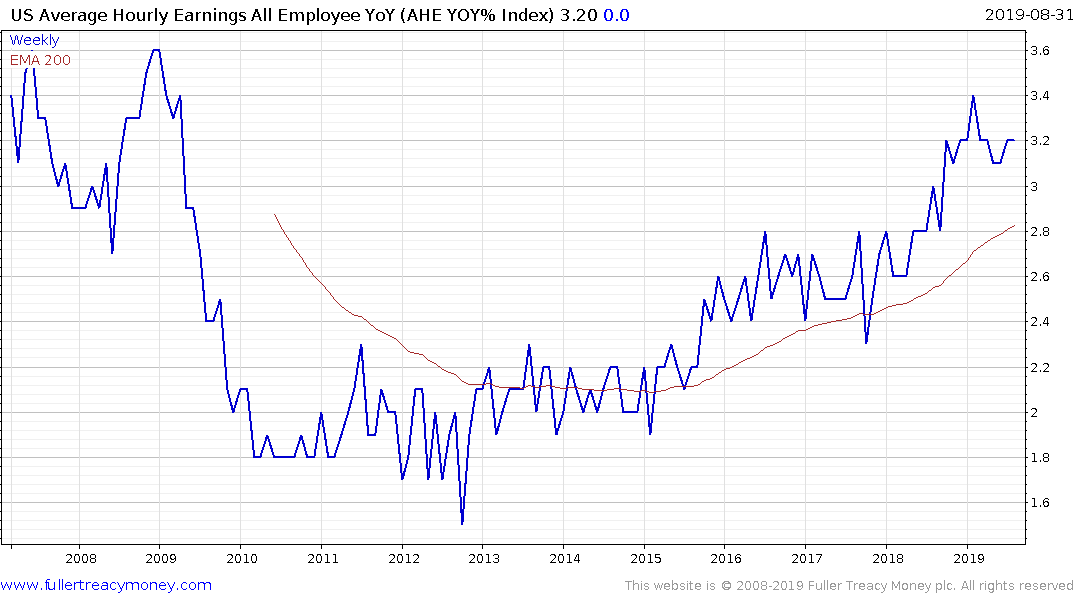 This combination of factors suggests wage demands are unlikely to end with retail workers. Average hourly earnings growth has been trending higher since 2012 and at 3.2% is within striking distance of the 3.5% peaks reached both ahead of and during the credit crisis. That suggest wage growth around these levels is suggestive of a maturing expansion. 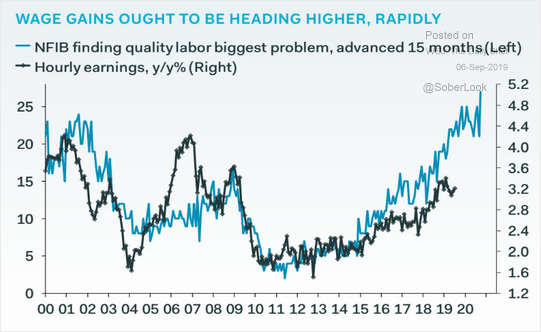 This article from the Wall Street Journal highlights the trend of people leaving large cities for smaller ones because of the ease of working from home and lower costs. Here is a section:

Additionally, workers tend to spread out geographically during an economic cycle’s later stages, economists said, raising questions about how these cities will fare in a downturn. Workers are usually more confident—and employers more lenient—when the economy has been flourishing.

Ms. Swift said she and her family were effectively living paycheck to paycheck in the Los Angeles area. But living in Boise is 35% less expensive than living in Los Angeles, according to personal-finance website Bankrate.com. She and her husband, who have two children, bought a house in the Boise area after renting in L.A. It is twice as big as their old place, but the monthly payments are half as much as their L.A. rent. There was also enough room for her mother to move in. “We all love it,” she said. “We have a much higher quality of life here.”

The trend of fewer worker protections and freelancing has been a major workplace development over the last decade. It is freelance workers which are first to be fired in a downturn because there are so few costs involved with letting them go. That suggests peripheral or satellite cities or states will be hit hardest in a recession.