The arguments for action inside the Trump team vary from simply enforcing U.S. transparency laws and creating a level of reciprocity, to raising national-security concerns with some of the Chinese companies that American pension funds are exposed to, according to people familiar with the conversations.

Some of those companies are firms that the U.S. government has identified as bad actors or has imposed sanctions against. The argument continues that Americans would unlikely want to invest in those companies if they had the choice.

The market capitalization of the 156 Chinese companies, including at least 11 state-owned firms, listed on the three-largest U.S. exchanges — the NASDAQ, New York Stock Exchange and NYSE American — stood at a collective $1.2 trillion as of late February, according to a report by the U.S.-China Economic and Security Review Commission.

China earlier this month removed a $300 billion cap on overseas purchases of Chinese stocks and bonds meaning global funds no longer need to apply to purchase quotas to buy the assets. The move is designed to lure more foreign capital into Chinese markets.

The removal of the cap on QFII investments was largely moot since only about a third of the allocation was being used anyway. The point I have been making for years is the only incentive China has to open up its financial sector is to diversify its risk. Today’s most of the risk resides domestically. The only way China can expect to receive assistance from the rest of the world during a crisis is if that risk is shared. That is the only reason for opening up to the financial sector to overseas investment. Risk pooling is the most basic factor in insurance planning and that is what China is doing. It therefore makes logical sense to question whether it is wise to buy what they are now so desperate to sell?

The Nasdaq Golden Dragon China Index, which is comprised of Chinese companies with US listings, peaked June 2018. It rebounded in the first quarter with just about everything else but has subsequently given up much of the bounce. The decoupling of the US and Chinese economies which looks like a medium-term trend represents a clear risk of further selling pressure on Index.

Meanwhile, that could also translate into pressure for these same companies to repatriate their listings to China. That project has been delayed because of the size of the companies concerned and the effect their movement would have on the float of the domestic Chinese market. 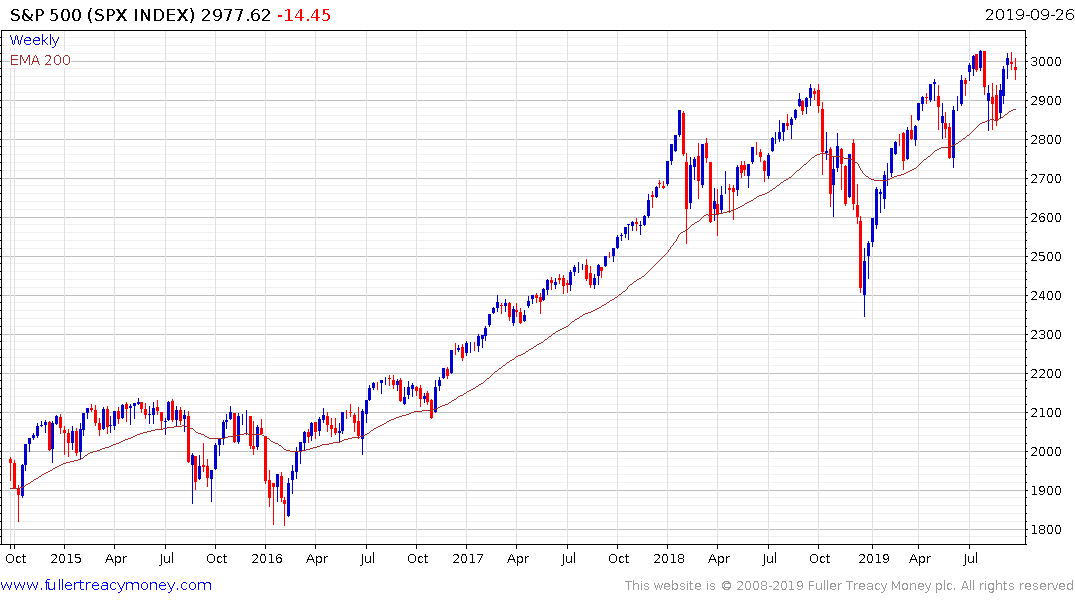 The S&P500 continues to pause in the region of its all-time peak. A sustained move below the trend mean would be required to question the medium-term uptrend.