What to Watch in Commodities: Buffett, OPEC, Gold, Fed, La Nina
Comment of the Day

Less than a month after making waves with news of a move into Barrick Gold Corp., Buffett is again rocking the world of commodities. This time, Berkshire Hathaway disclosed stakes in five Japanese trading companies that dominate the nation’s energy and raw materials industries. The quintet are Itochu Corp., Marubeni Corp., Mitsubishi Corp., Mitsui & Co. and Sumitomo Corp.

Berkshire’s stakes amount to a little more than 5%, but Buffett made clear that they could be increased. The trading houses are known as “sogo shosha” and have roots dating back hundreds of years. While they operate in areas like textiles and machinery, they derive much of their revenue from energy, metals
and other commodities, supplying resource-poor Japan with essentials.

Following the commodity bust many investment banks closed trading desks. There were a number of leading commodity trading houses which went through very lean years and even today Noble Group is struggling to get out of bankruptcy. Many of the big commodity traders like Trafigura, Mercator, Cargill and Koch Industries are privately held. Picking up Japan’s big trading houses is a tangential way of playing in commodities for Berkshire Hathaway. It also speaks to the company’s familiarity with pricing the balance sheets of banks rather than commodity producers. 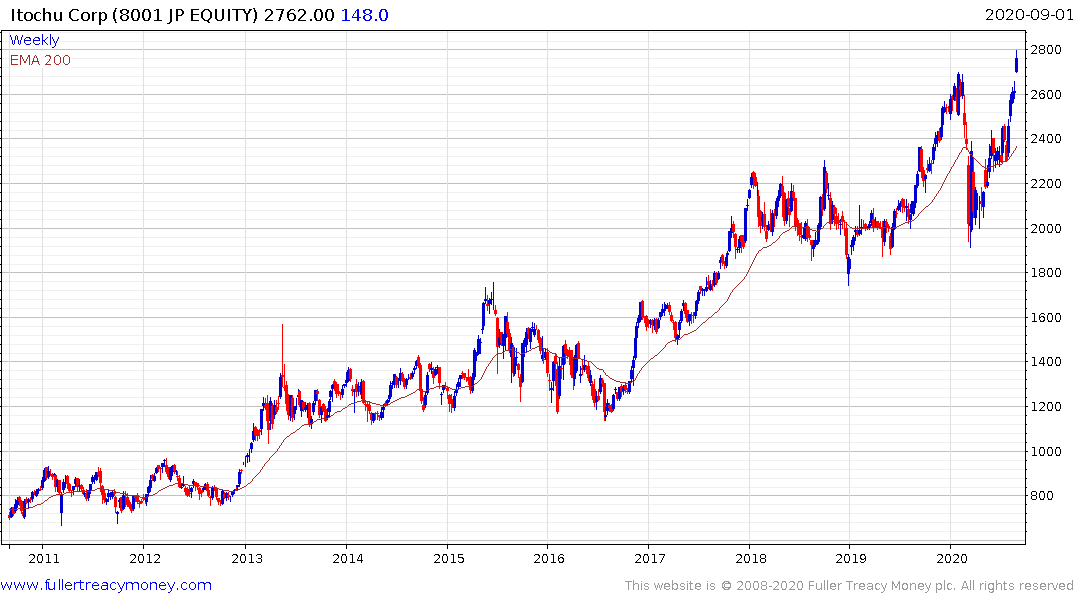 The value orientation of many Japanese companies is probably what attracted Berkshire more than any other factor. Itochu pays a 3.19% dividend has an Estimated P/E of 9.69 and price/sales ratio of 0.4. The share remains in a consistent medium-term uptrend. 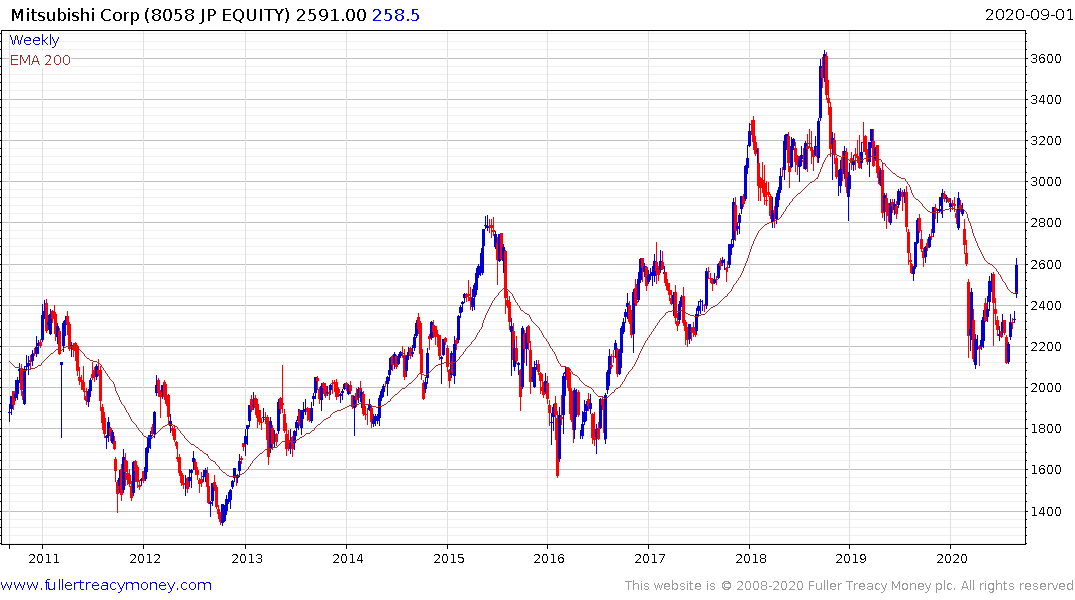 Mitsubishi pays a 5.17% dividend yield with a price to sales ratio of 0.3. The share rallied to break its two-year downtrend on the news of Berkshire’s purchase. 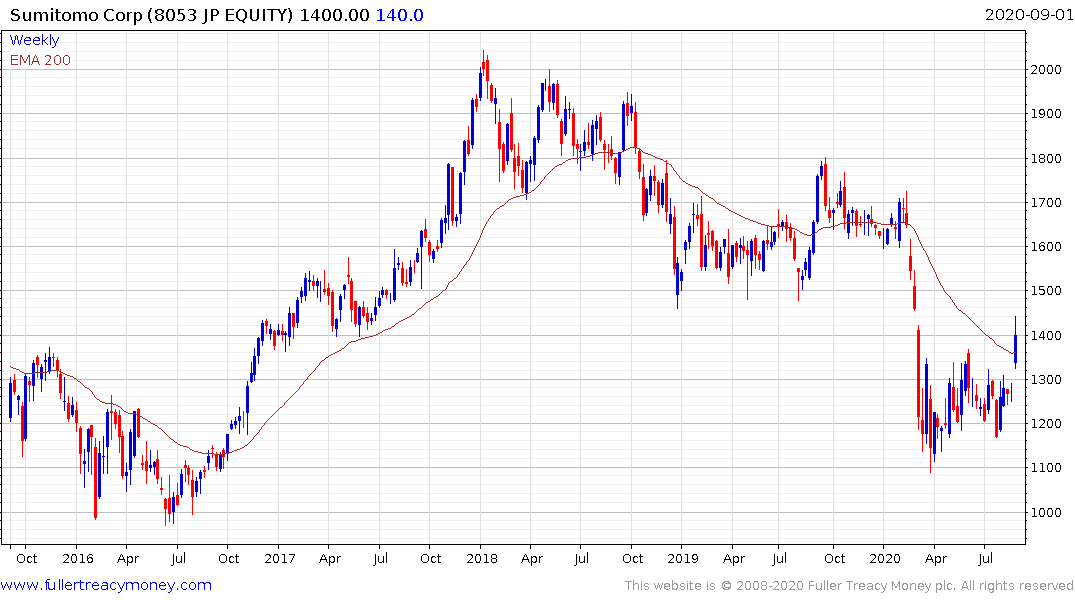 Sumitomo Corp has similar valuations and has also just broken on the upside. 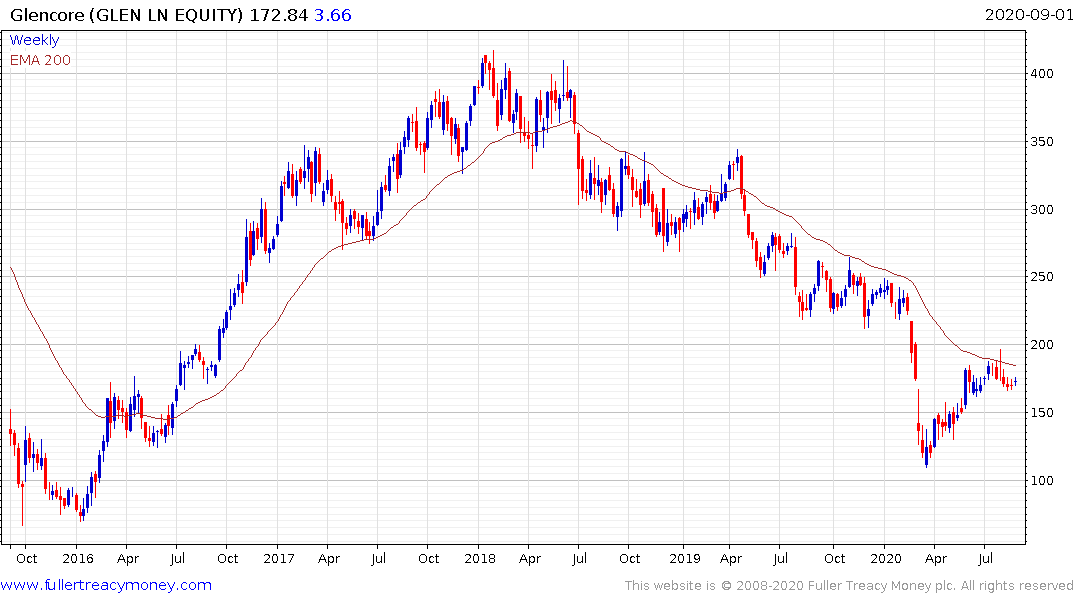 Elsewhere among commodity traders, Glencore has been trending lower since early 2018 and will need to sustain a move above the trend mean to signal a return to demand dominance beyond the short term. 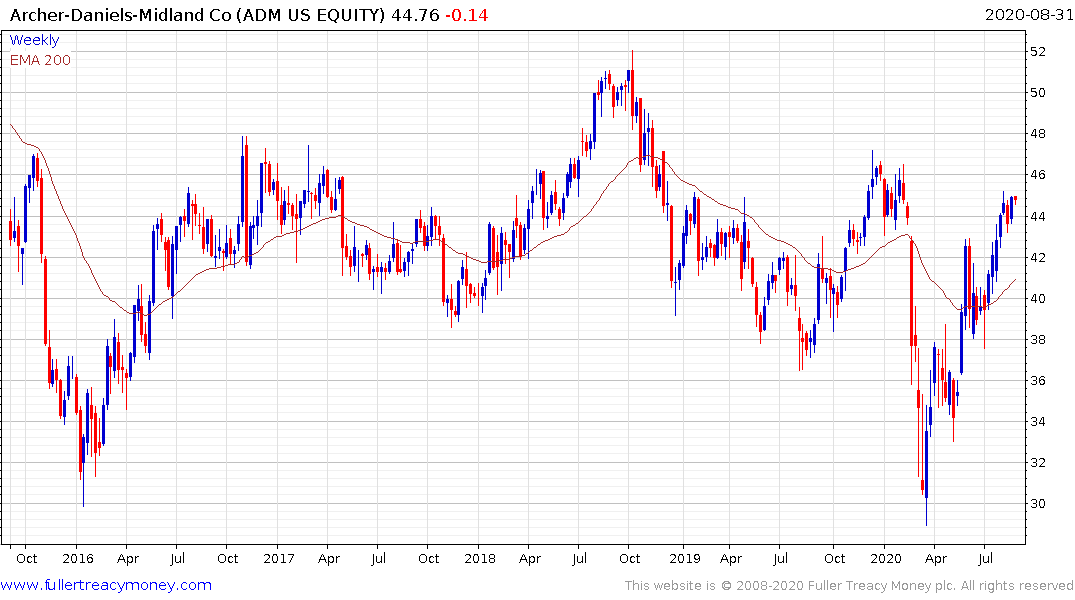 Archer Daniels Midland has been ranging in a volatile manner since 2014. The share needs to sustain a move above $50 to clear signal a return to demand dominance but recent action is encouraging.