It is likely that uncertainty in the global economy will continue to put downward pressure on long-term rates. The Mortgage Bankers Association is predicting the interest rate for 30-year fixed-rate mortgage will be around 4.8 percent at the end of 2016, that's an increase of less than one percent.

"We have a fairly weak global economy right now," said Michael Fratantoni, MBA's chief economist. "You have many global investors parking their money in U.S. Treasury securities or other safe assets and that is keeping our longer term rates lower than they otherwise would be."

Despite those concerns, Fratantoni is optimistic about next year's real estate market.

"At some point, you could get to a level of rates, 6 to 6 1/2 percent, that would really begin to crimp affordability and then that would be a real negative," he said. "But at this point, it's going to be just a very modest headwind. Most of the other fundamentals are suggesting a very strong housing market in the year ahead."

Waters agrees. Although he demurred when asked what he thought the interest rate on a 30-year fixed-rate mortgage would be at the end of the year, he didn't think it would be significantly higher.

"I tend to think from a 30-year fixed mortgage standpoint there's not going to be an extraordinary change," he said. "I don't think they'll go up or down more than a quarter percent, at least not initially. It's not going to five [percent] and it's not going to three [percent]. We're going to stay in a tight band."

30-year Treasury yields moved to a new low in January and spent the rest of the year moving higher in a rangey uptrend characterised by a progression of higher reaction lows. A sustained move below 2.8% would be required to question current scope for continued higher to lateral ranging. 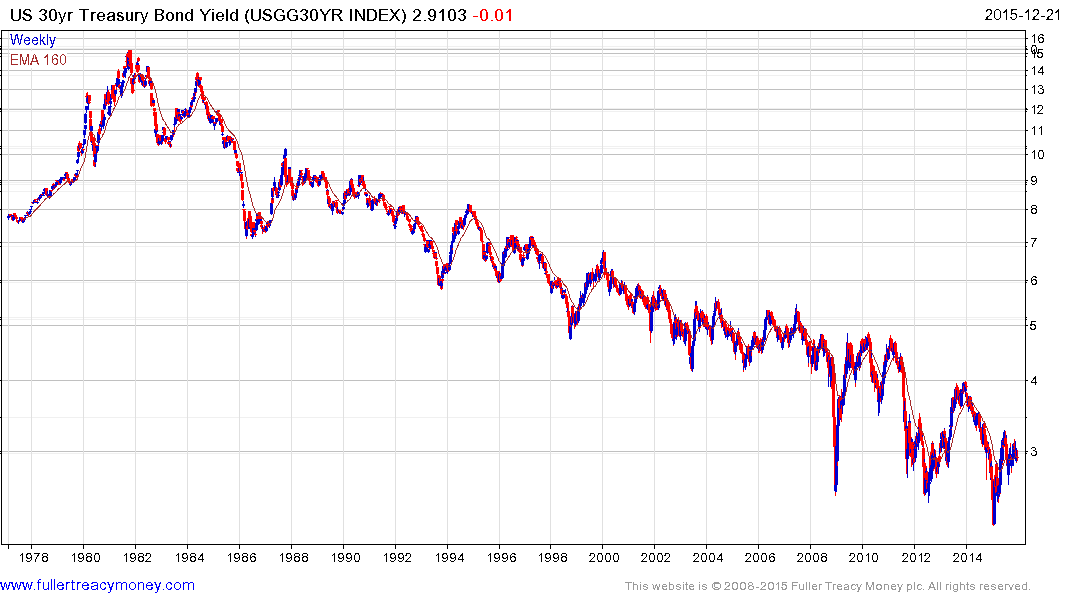 However it is also worth considering the size of the moves that have already occurred in this market. Yields have been trending lower for 30 years and the trend has lost momentum over the last five years. Spikes to new lows have not been sustained, meanwhile the long-term progression of lower rally highs remains intact. The sentiment I most often see expressed is complacency that nothing will change anytime soon and that may be correct. However it will also be useful to remember that a sustained move above 4% would break the downtrend and complete a Type-2 bottom.

This is an artificial illustration because wages and inflation are expected to chip away at the outstanding balance over time. Additional considerations such as taxes, utilities and repairs are also factored into affordability however these do not affect how much one can initially borrow.

The low interest rate environment has helped house prices recover because consumers, investors and hedge funds could borrow cheaply and afford more house for the available capital. Property prices are unlikely to be immune to rising borrowing costs. Wage growth and higher inflation will be required to lend additional support to the housing market if the trend is to persist.

This section from a Wells Fargo report dated April 1st may also be of interest:

We see a couple of reasons why housing may prove to be even more interest rate sensitive than it has been in the past. For starters, median household incomes have barely budged, so housing affordability has fallen as housing prices have rebounded. Qualifying for a mortgage is also more difficult today and income requirements are more stringent. Even a modest rise in mortgage rates could price many potential buyers out of the market, particularly with many younger, first-time buyers carrying a great deal of student loan debt. 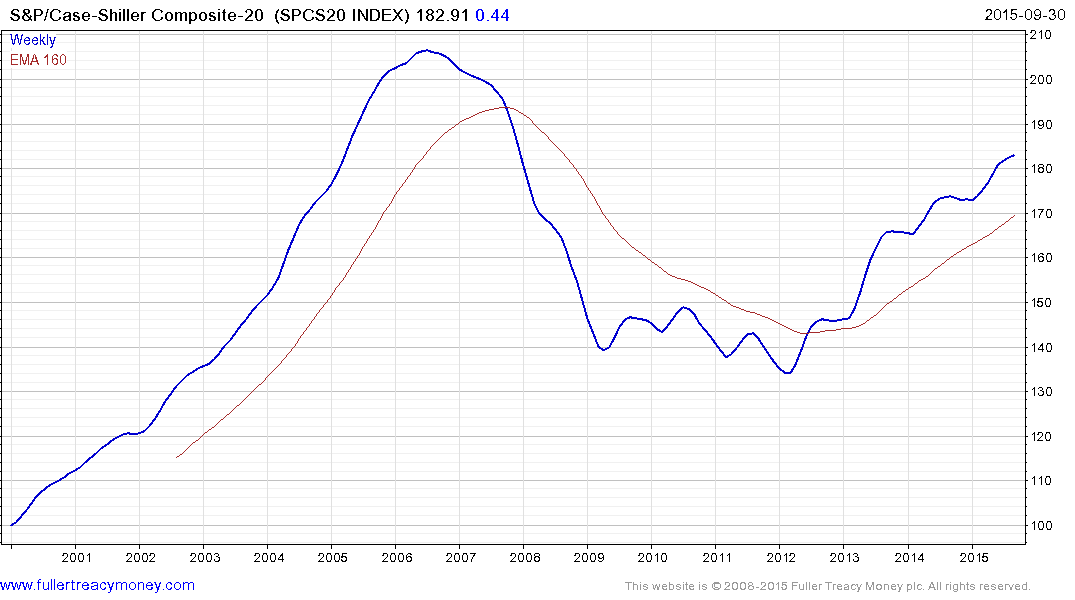 The Case Shiller 20 Index was last updated in September but remains on an upward trajectory. Meanwhile home prices in the most desirable urban locations, particularly in coastal states are well above their 2007 peaks. 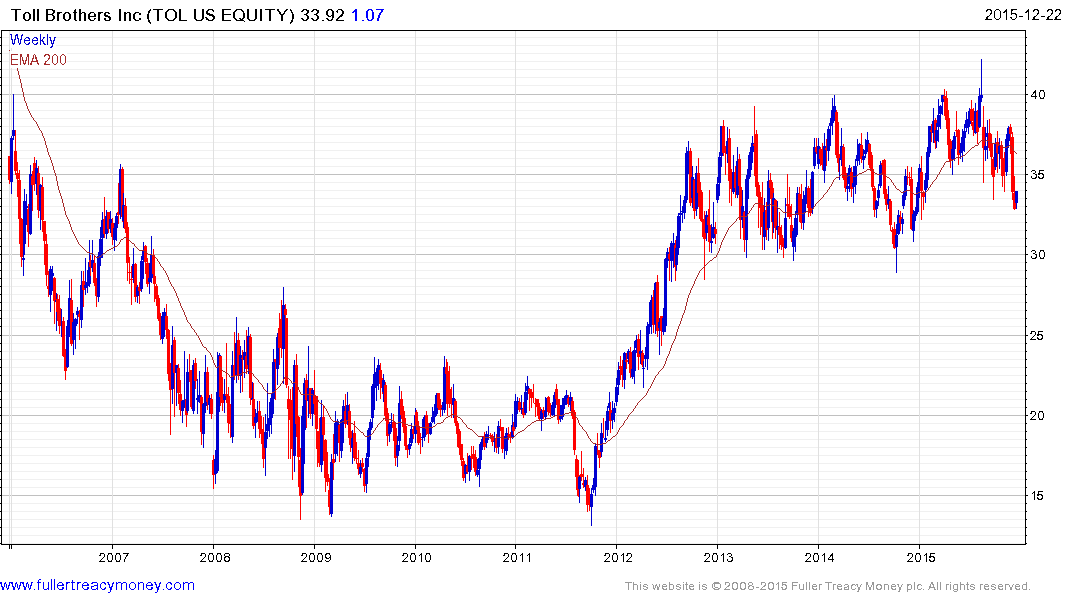 The performance of homebuilders has been unimpressive over the last three years with the majority being confined to volatile ranges. Toll Brothers is representative. 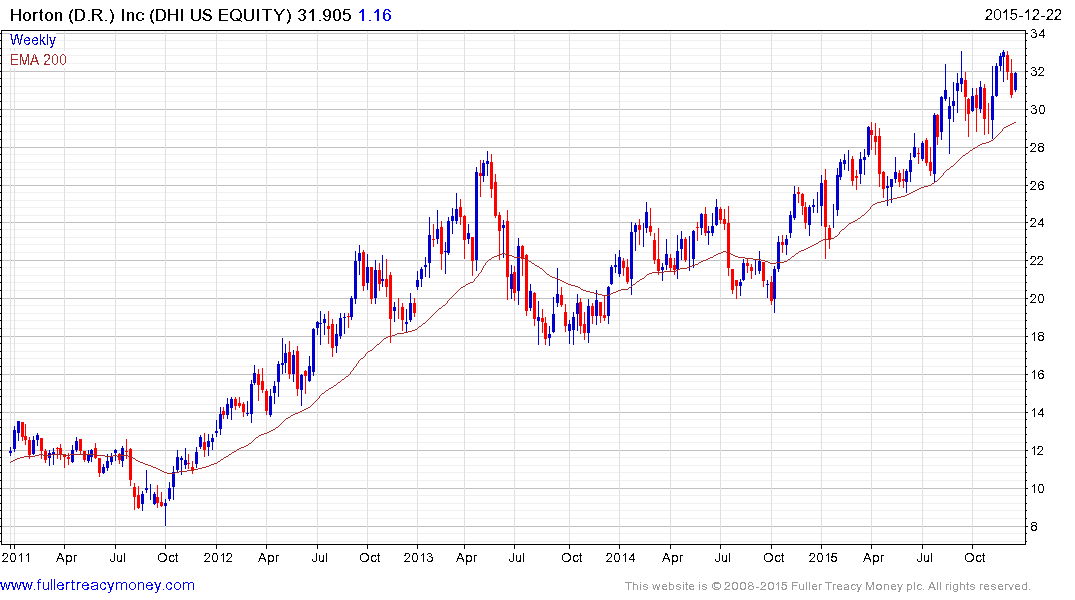 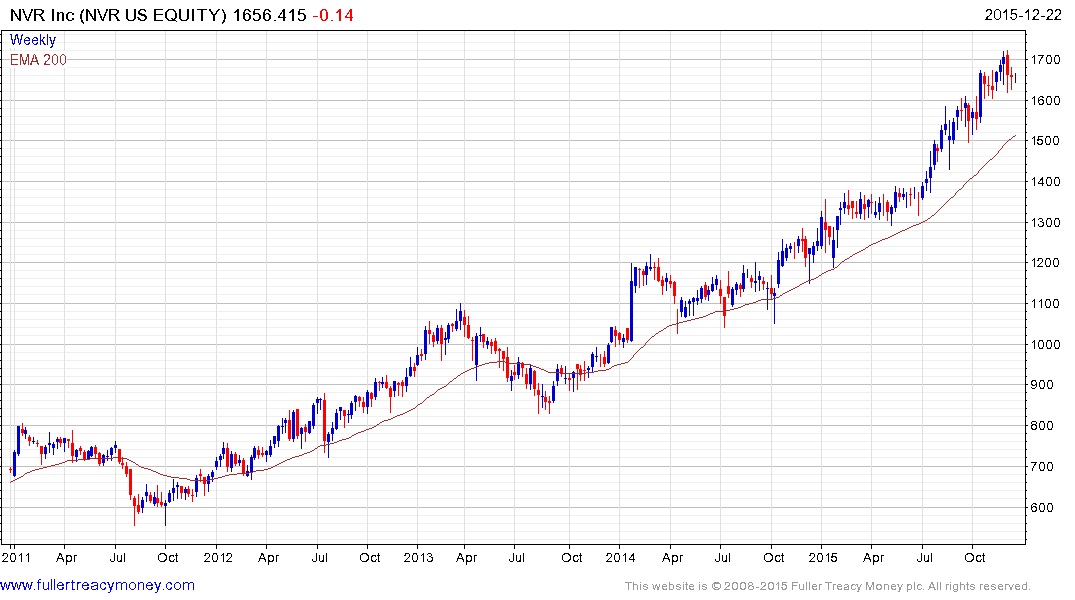