What future? It's the end of Hong Kong as we know it
Comment of the Day

What future? It's the end of Hong Kong as we know it by Eoin Treacy

I get something else, too. If there is no hope, there is only the present. Things you do today will have no consequences. That, actually, can be a liberating realisation. If there is no tomorrow, then anything is possible, nothing is prohibited.

Maybe we self-serving old-timers have robbed our children of their future. But they are helping us dig our own graves. It’s not: “If we burn, you burn with us.” It’s: “We are all burning together.”

Well, dear young people, you now have your wish: we can all self-destruct together. It’s the end of Hong Kong as we know it, and many local people are fine with it.

Hong Kong is the subject of a major transition. The great Pearl River Delta is the focus on a major industrial hub where Hong Kong has long acted as an interlocutor for international trade. The future as outlined by the central government is that the cities of Shenzhen, Guangzhou, Hong Kong and Macau will form unified trading and financial hub aimed at rivalling the Bay Area in California. For Hong Kong that represents a major change because it is more a marriage of equals at best or at worst it represents the terminal decline of the island economy in preference to the mainland.

The protests in Hong Kong are the latest in a string of populist movements where the central complaint is about living standards. Hong Kong property prices are among the highest in the world, particularly relative to domestic incomes. That is only sustainable because of the lack of housing stock and the inflows of capital from the mainland in particular. That has pushed up the price of just about everything.

The length of the current property cycle, with only modest declines, since 3003, has rewarded those with assets but has pushed property ownership out of the reach of many people. There are plans to build more public housing but that is going to take years to complete. In the meantime, the population is sensitive to being overwhelmed by mainland money and power which in many respects is levelling living standards between the island and the mainland. That’s the primary reason for the protests and free elections are no panacea for that challenge, not to mind China has no intention of acquiescing to that demand. In short, there is no easy solution to this impasse which suggests the longer the protests continue the greater the risk of a curfew being imposed. 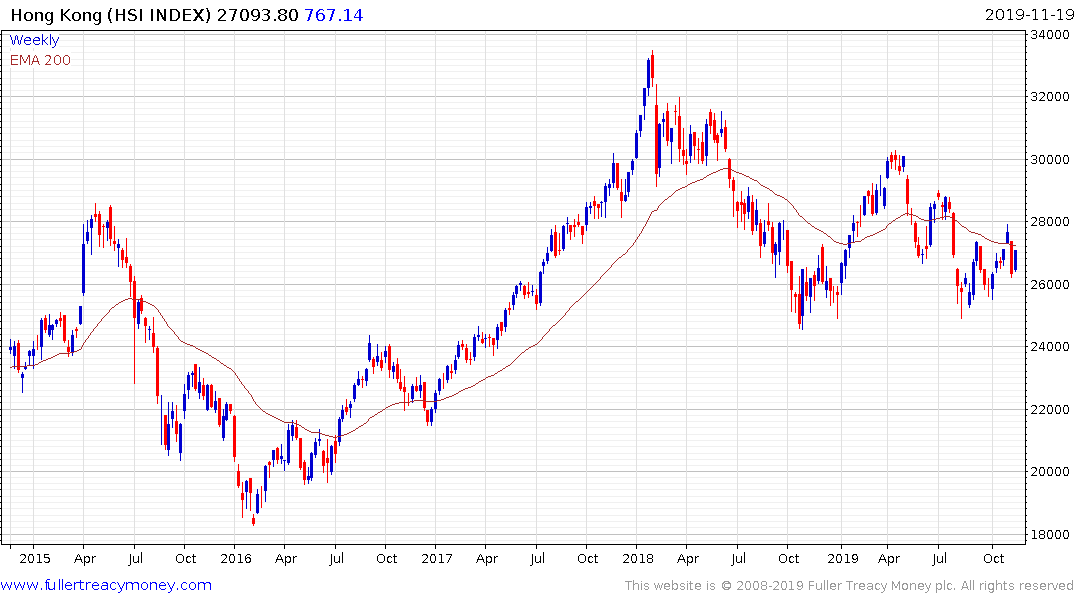 I am reminded of Baron de Rothchild’s “buy when there is blood on the streets, even if it is your own” There is plenty of blood in the streets but the Hang Seng is heavily stacked with mainland focused shares. It is more representative of sentiment towards the trade war than what is going on in Hong Kong. The Index has held a progression of higher reaction lows since August as it continues to firm from the psychological 25,000 level.