What a Big Deficit You've Got There, Mr. President
Comment of the Day

What a Big Deficit You've Got There, Mr. President by Eoin Treacy

It’s also important to note that the natural tendency in a growing economy, absent any tax changes, is for revenue to rise. Real revenue dropped in 2016, but that was because of the mini- recession that had started the year before. Revenue has risen during every other year of the current recovery. This year the economy is growing at what may turn out to be the fastest pace since the 2000s, around 3 percent, yet revenue is down. Some of that economic growth is surely due to the tax cuts and to this year’s spending increases, but it’s clear that the Tax Cuts and Jobs Act has so far displayed none of the magical revenue-increasing properties that some of its supporters claimed for it last year. If we take last year’s revenue growth of 1.1 percent as the — very conservative — baseline, it would seem instead to have so far resulted in a revenue decline of 3.5 percent, or $109 billion.

Federal spending, meanwhile, is up an inflation-adjusted 2.9 percent so far this year. That’s bigger than the revenue decrease but smaller than last year’s 3.5 percent increase. Overall, my read of the two charts above is that the overall shift since 2015 from shrinking deficits to rising ones has been mainly about rising spending, but the increase in the deficit this year has been mainly about the tax cuts.

It is generally accepted that counter cyclical policies are the most appropriate for any economy. You loosen when the going is tough and tighten when the going is good and that is expected to keep growth relatively steady with less aggressive peak to trough swings.

Right now, the USA is running some of the most overtly procyclical policies seen in a long time. That is delivering world beating growth, low employment and high capacity utilization. It is even contributing to wage growth. That is part of the reason the Fed has been restricting availability of capital and raising rates. However, procyclical policies exacerbate peak to trough swings which cannot be forgotten if the US economy is in fact heading towards a recession.

The ECB ended its QE program this week. They had picked up responsibility for global monetary accommodation back in 2016 when the Fed closed its program. We have been stating for much of the last decade that this was a liquidity fueled advance. There is no clear indication right now where the supply of liquidity is going to come from with the Fed shrinking its balance sheet and with the ECB on hold. The pace of China and Japan’s balance sheet expansion is still positive but it has moderated significantly.

What contributed to the 2015/16 medium-term correction being resolved on the upside was massive capital infusions by the ECB. Some form of additional accommodation is probably going to be required from some source on this occasion too. 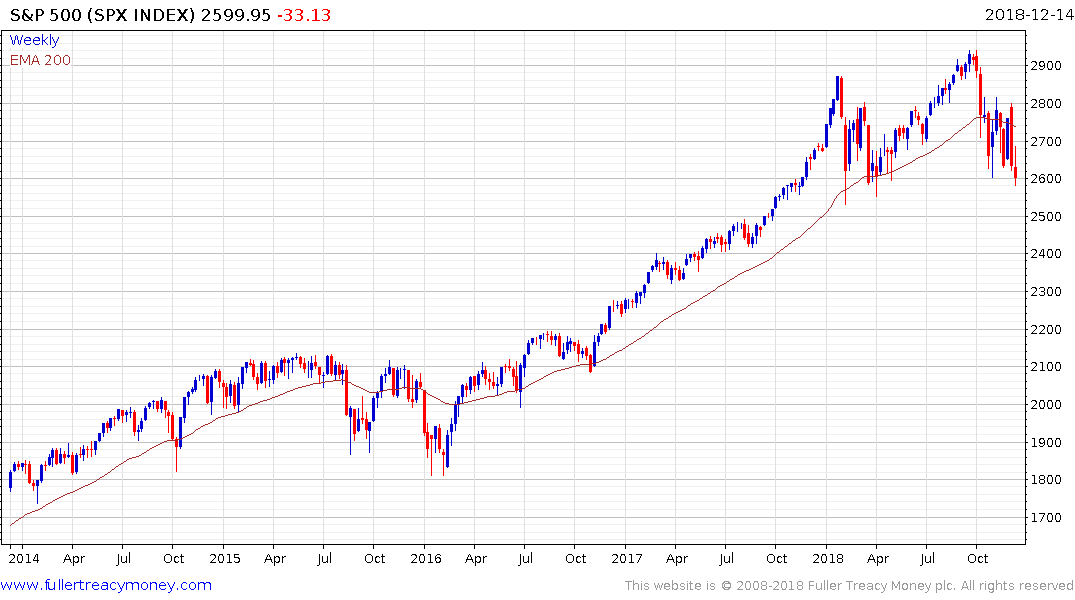 The S&P500 has lost momentum over the last year which reflects the above the considerations and it will need to hold the lows above 2500 if the range is to continue to hold.