“Overall we expect declines in equities to continue until the coordinated response has a size where it offsets the impact from COVID-19,” said Peter Garnry, head of equity strategy at Saxo Bank. “What is happening now is that oil price war and COVID-19 have increased the probability of a new credit crisis.”

As such, the stars may be aligning for extraordinary stimulus. “If fiscal expansion comes with explicit guarantee from the central bank to backstop any funding required then you basically have the closest you get to ‘helicopter money’” said Garnry. “It’s too early at this point but it all depends on how the global pandemic plays out and whether we get another credit crisis.”

Ian Shepherdson, founder of Pantheon Macroeconomics, said on Twitter rising coronavirus cases in the U.S. could see the Fed cut rates to zero and a $1 trillion stimulus package. In the meantime, potentially brace for the Treasury curve to fall near zero with the S&P 500 tumbling further, he wrote.

Monetary policy beats most other factors most of the time has been a refrain at this service for decades. There is clear need for combined monetary and fiscal stimulus from most countries and if that is coordinated then all the better. However, while these kinds of supports for consumer activity are necessary, we need to also see progress made in the spread of the virus.

That is not yet apparent and there is scope for the situation to get considerably worse before it gets better. The vast majority of indices have short-term oversold conditions. The S&P500 has now clearly failed to sustain its upward break and the reaction has been particularly dynamic. This Index has Type-2 top formation characteristics 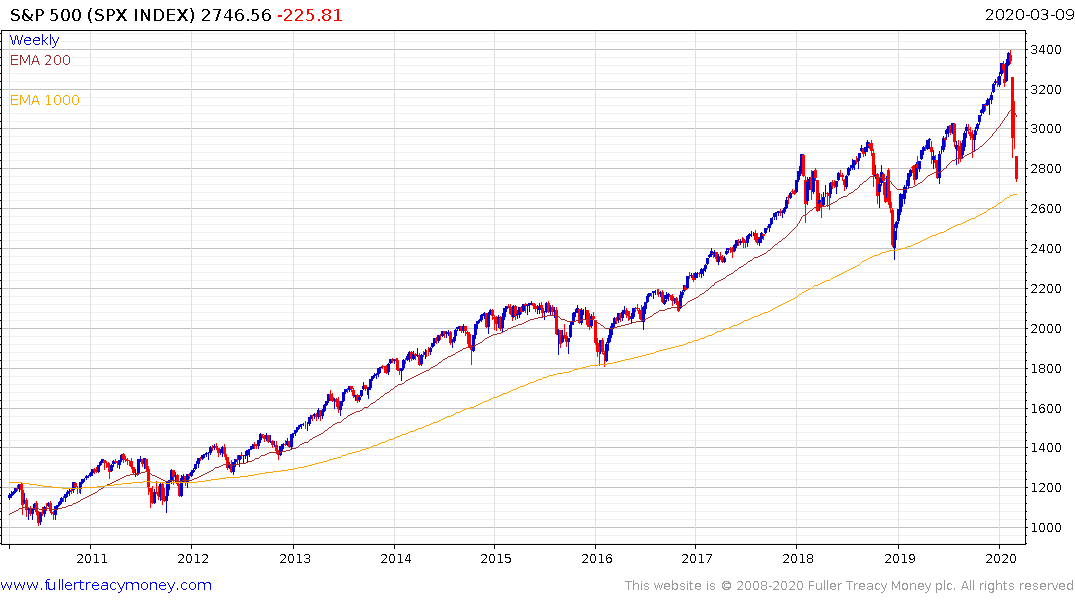 The region of the 1000-day MA may offer support but the big determinant of a return to demand dominance will be in the Index’s ability to sustain a move back above the trend mean. 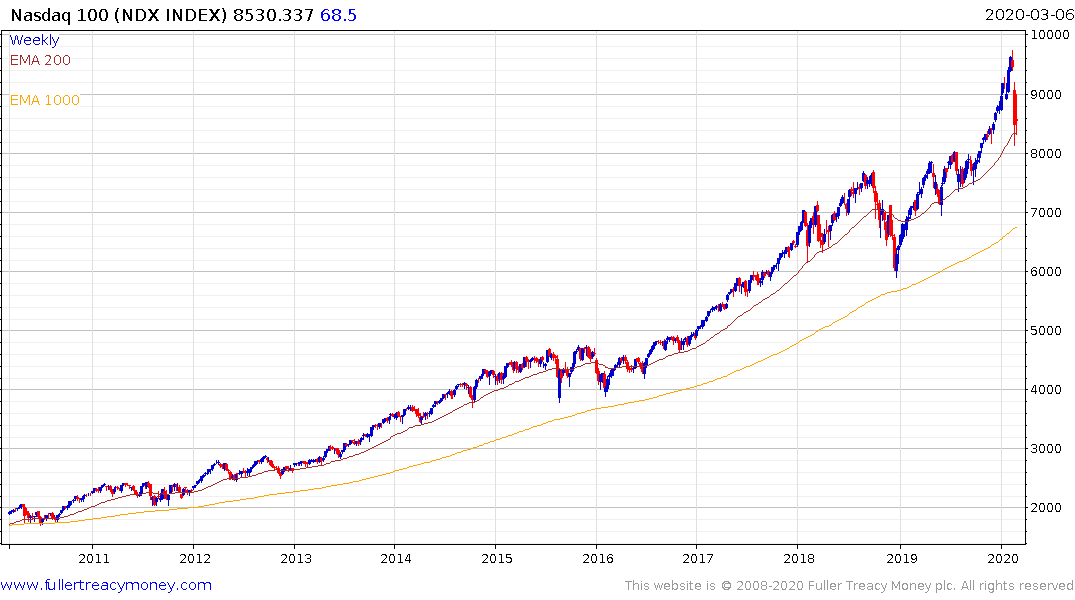 The Nasdaq-100 is back in the region of its trend mean and needs to hold in the 8000 area if a loss of consistency similar to the S&P500’s is to be avoided. 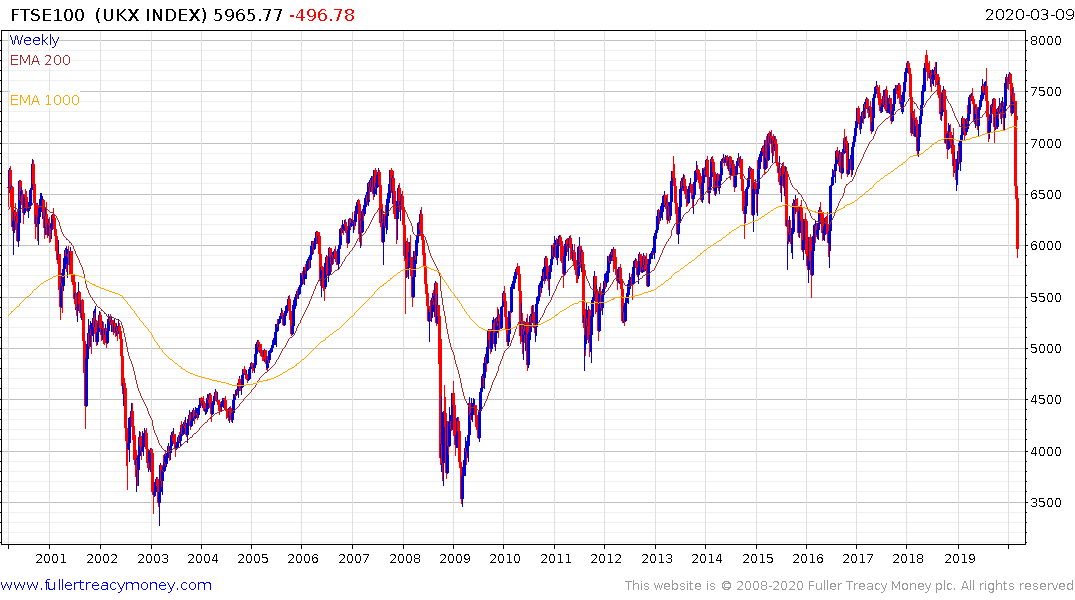 The FTSE-100 ranged above 7000 for three-years but has been dragged lower by the underperformance of the energy sector. It has now failed to sustain the breakout from its 17-year range. 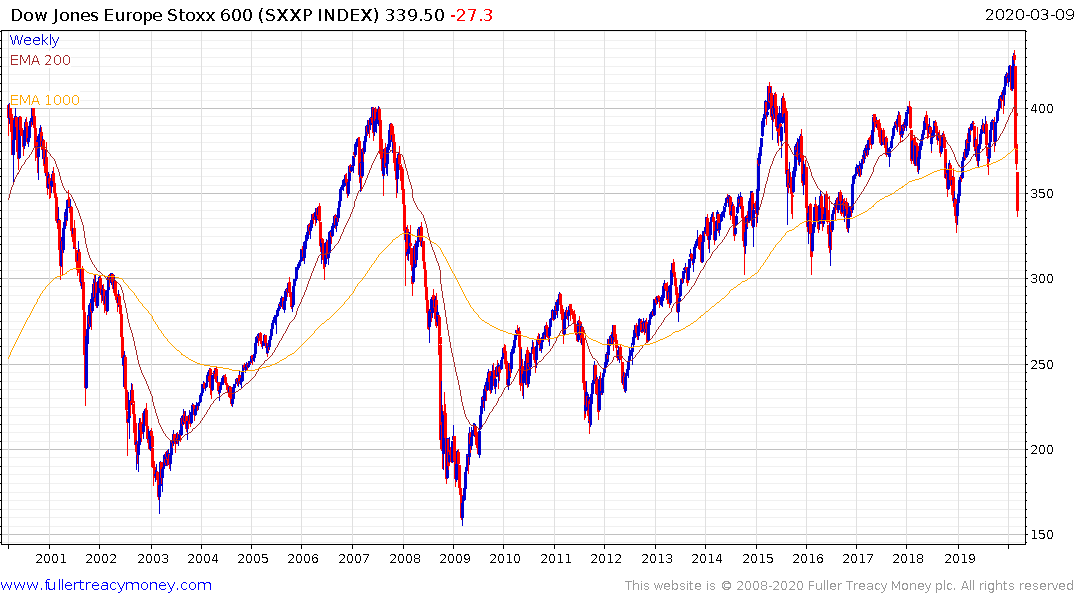 The Europe STOXX 600 has now also failed to sustain its breakout from a long-term range. 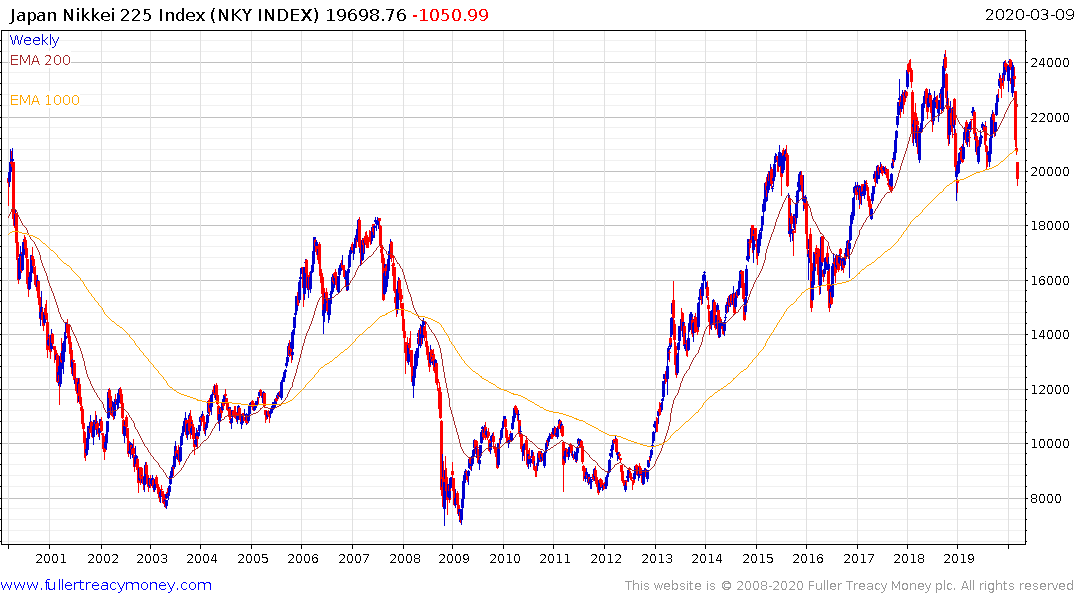 The Nikkei-225 closed just below the psychological 20,000 level today and may also be in the process of failing to sustain its upward break.

The commonality in the performance of major indices coupled with the breakdowns seen in their respective banking sectors suggests we need to be prepared for a global recession. The contagion effect means the good will be sold off with the bad so value opportunities will abound but it is still early to think about those value opportunities.