Waiting For The Last Dance
Comment of the Day

Waiting For The Last Dance by Eoin Treacy

The strangest feature of this bull market is how unlike every previous great bubble it is in one respect. Previous bubbles have combined accommodative monetary conditions with economic conditions that are perceived at the time, rightly or wrongly, as near perfect, which perfection is extrapolated into the indefinite future. The state of economic excellence of any previous bubble of course did not last long, but if it could have lasted, then the market would justifiably have sold at a huge multiple of book. But today’s wounded economy is totally different: only partly recovered, possibly facing a double-dip, probably facing a slowdown, and certainly facing a very high degree of uncertainty. Yet the market is much higher today than it was last fall when the economy looked fine and unemployment was at a historic low. Today the P/E ratio of the market is in the top few percent of the historical range and the economy is in the worst few percent. This is completely without precedent and may even be a better measure of speculative intensity than any SPAC.

This time, more than in any previous bubble, investors are relying on accommodative monetary conditions and zero real rates extrapolated indefinitely. This has in theory a similar effect to assuming peak economic performance forever: it can be used to justify much lower yields on all assets and therefore correspondingly higher asset prices. But neither perfect economic conditions nor perfect financial conditions can last forever, and there’s the rub.

All bubbles end with near universal acceptance that the current one will not end yet…because. Because in 1929 the economy had clicked into “a permanently high plateau”; because Greenspan’s Fed in 2000 was predicting an enduring improvement in productivity and was pledging its loyalty (or moral hazard) to the stock market; because Bernanke believed in 2006 that “U.S. house prices merely reflect a strong U.S. economy” as he perpetuated the moral hazard: if you win you’re on your own, but if you lose you can count on our support. Yellen, and now Powell, maintained this approach. All three of Powell’s predecessors claimed that the asset prices they helped inflate in turn aided the economy through the wealth effect. Which effect we all admit is real. But all three avoided claiming credit for the ensuing market breaks that inevitably followed: the equity bust of 2000 and the housing bust of 2008, each replete with the accompanying anti-wealth effect that came when we least needed it, exaggerating the already guaranteed weakness in the economy. This game surely is the ultimate deal with the devil.

The challenge for value investors is they tend to see trouble coming way before the rest of the crowd. For many funds the high Cyclically Adjusted P/E ratio has ensured they have been underinvested for years so bearishness is not a new phenomenon even if some are now doubling down on their view.

As David used to say, “the Fed is a serial bubble blower”. He also used to say that central banks have killed off more bull markets than all other factors combined. Therefore, we need to pay attention to what is happening with money flows if we are to have any success in thinking about when a bubble might form and more importantly when it might pop.

Another short hand way of thinking about markets is everything is price off of the 10-year. The clearest rationale for giving high growth companies access to abundant capital and high valuations is that interest rates are low and likely to remain that way. The 10-year is now backing up and cleared the 1% level today. That is a clear challenge to the rationale for remaining overweight in mega-cap tech where valuations have expanded considerably over the last year.

Low interest rates force investors out the risk curve. Another way to think about that is they move upstream to capture cashflows. The valuations in the stock market are reasonably accessible to access but how to assess what represents value in private equity is dependent on growth rates, liquidity and demand. There is a solid argument that the reason for the rush to list in the last six months is precisely because of the desire to sell before interest rates rise.

At a minimum we are now seeing a significant rotation into stocks that are less dependent on low interest rates.

As I have been saying for months, the big question for the sustainability of the bull market will the Fed’s willingness to engage in yield curve control. If yields continue to back up and the yield curve continues to steepen it is going to put significant pressure on leveraged trades and will reintroduce a discount rate to valuations. It will then be up to the Fed to intervene at the long end of the curve and/or massively expand money supply. We are at the hard edge of financial repression. 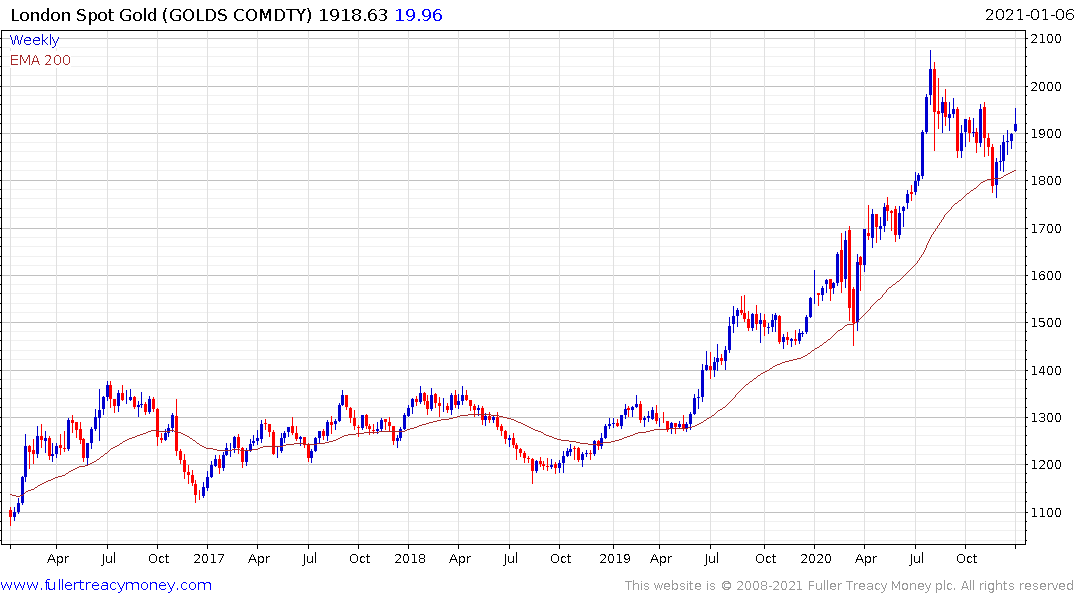 Gold has paused again in the region of the November peak, posting another downside key day reversal. It is hard to imagine why gold should fall with a clear risk of intervention to support Treasury prices. Nevertheless, a clear countermanding upward dynamic will be required to signal a return to demand dominance.